Zverev overcomes 12 double-faults at US Open; Osaka into SF

Zverev overcomes 12 double-faults at US Open; Osaka into SFclose 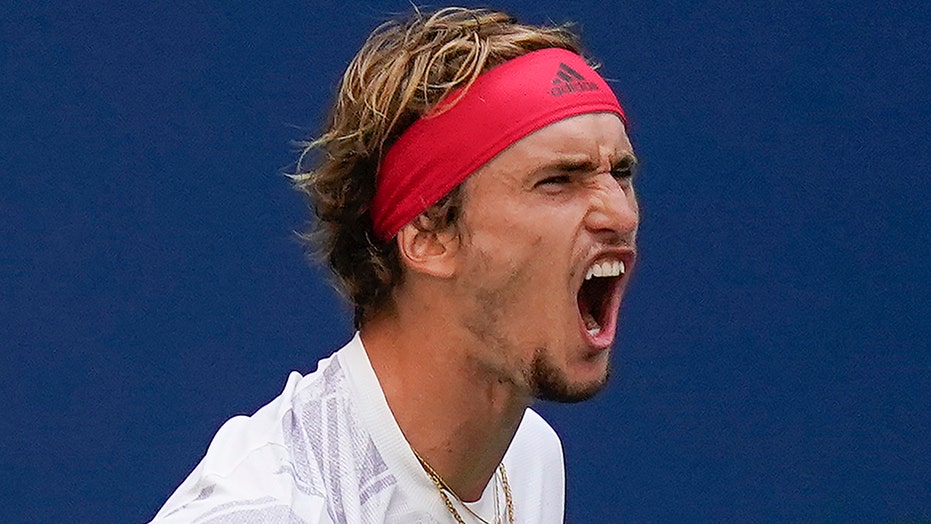 The disqualification of Novak Djokovic from the U.S. Open, and the absences of Rafael Nadal and Roger Federer, presented quite an opportunity to Alexander Zverev and the other men left in the tournament — all in their 20s, all seeking a first Grand Slam title.

Who would falter? Who would rise to the occasion? Done in by double-faults and bothered by an officiating decision, Zverev stumbled at the start of Tuesday’s quarterfinal against Borna Coric. Then, suddenly, Zverev soared.

“The Novak news shocked us all,” Zverev said, “and obviously for us younger guys, we see that as a massive opportunity. But we have to put our head down and do our job.”

It was a scratchy contest — both men generated more unforced errors than winners through two sets, and Zverev finished with 12 double-faults — and the winner acknowledged afterward that the way he played at the outset was “not the level for the quarterfinal match in a Grand Slam.”

The 27th-seeded Coric's take: “I felt like I was in charge of the match. I saw he was struggling, not playing his best tennis.”

But Zverev got more aggressive as things went on, including essentially hitting two first serves instead of a softer, slower second following a fault, and that helped lift him to his second consecutive major semifinal, after getting that far at this year’s Australian Open.

It was Carreño Busta who was the beneficiary when Djokovic was defaulted from their fourth-round match for hitting a ball that accidentally hit a line judge in the throat after a game.

In women's action Tuesday, two-time Grand Slam champion Naomi Osaka set up a semifinal against 28th-seeded Jennifer Brady, a 25-year-old from Pennsylvania who's never been this far at a major tournament.

Osaka, the former No. 1-ranked played who won the U.S. Open two years ago, played far cleaner tennis than her opponent in a 6-3, 6-4 win over 93rd-ranked Shelby Rogers at night.

“I came out with nerves. I think she did, too,” Brady said. “I just tried to pretend it was a first-round match."

It’s been quite a surge for Brady, whose big serve and forehand have carried her to an 11-1 record since tennis returned from its pandemic hiatus.

Her ranking was low enough at the start of 2020 that she needed to go through qualifying to get into a tournament’s main draw.

“There were a lot of doubts, a lot of questions. Definitely not positive thoughts during those times,” said Brady, who helped UCLA win an NCAA title. “But I think I’m pretty lucky to have just stuck to it and just really continue to just play and practice and compete and get better. Here I am today.”

Zverev has been considered an up-and-coming talent to watch for a few years now but had never quite put it together at Grand Slam tournament until this year.

And Tuesday, he was dealing with a lot.

There were his own double-fault demons — nothing new, but disconcerting all the same — that appeared just 10 minutes into the match, when a trio of those free points contributed to Coric breaking to lead 3-1.

There was his argument with chair umpire Eva Asderaki-Moore early in the second set about her decision to replay a point after an incorrect call robbed Zverev of a point.

There was his gripe with ESPN courtside commentator Brad Gilbert, whose reports on live TV in an empty Arthur Ashe Stadium bothered Zverev enough that he told the former player and coach: “You’re talking too loud, man. … I can hear every single word you’re saying.”

There were all of Coric’s trips off the court to change out of his sweat-soaked clothes.

Most troubling of all: the holes in which Zverev kept finding himself.

The key juncture was with Zverev serving at 15-30 while down 6-5 in the third set. Two more points, and that set would belong to Coric.

But Zverev won the next three points with a backhand passing shot, an overhead and a 135 mph service winner to get to a tiebreaker, then dominated that, too, before opening the fourth set by holding at love.

“Huge point,” Zverev said. “But this is what I’ve been doing the past six months. I’ve been in the gym. I’ve been on the track. … This is the moment where it pays off.”

Catholic Mass is taken off the airwaves in Belarus