Zack Moss: 5 things to know about the 2020 NFL draft prospect

Zack Moss: 5 things to know about the 2020 NFL draft prospectclose

Zack Moss is a running back who is looking to make the jump from college to the pros.

The NFL hopeful spent four years at Utah and is regarded as one of the better running back prospects in the 2020 NFL Draft. Coming out of Hallandale High School in Florida, Moss had 1,098 rushing yards with 17 touchdowns as a senior. He was named the running back MVP at the Rivals Camp Series in Miami.

Here are five other things to know about Moss. 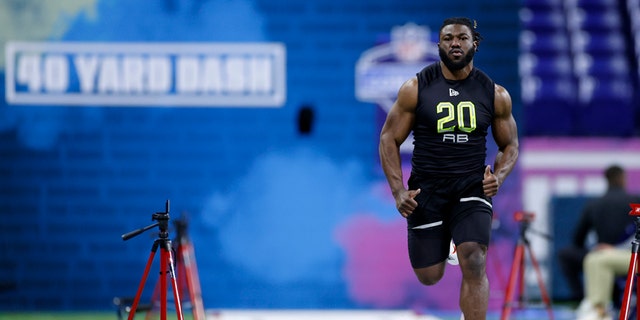 Running back Zack Moss of Utah runs the 40-yard dash during the NFL Combine at Lucas Oil Stadium on February 28, 2020 in Indianapolis, Indiana. (Photo by Joe Robbins/Getty Images)

Santana Moss was an All-American at Miami and had more than 10,000 career receiving yards over a 14-year NFL career. He was drafted by the New York Jets in the first round of the 2001 NFL Draft and was there for four seasons before signing with the Washington Redskins where he made second-team All-Pro in 2005. He had 84 receptions for 1,483 receiving yards and nine touchdowns.

Sinorice, on the other hand, also went to Miami, and was a second-round draft pick by the New York Giants in the 2006 NFL Draft. He only lasted four seasons in the NFL.

Moss was actually committed to join Miami and follow in the footsteps of his cousins, but when the Hurricanes moved on from head coach Al Golden back in 2015, Moss made the decision to leave as well.

As a true freshman, he started three games for Utah and played in 10 games overall. He finished with 84 carries for 382 yards during his first season. In 2017, Moss started 12 of 13 games, and he led the team with 1,173 rushing yards and 10 touchdowns.

Moss is arguably the greatest running back in the history of Utah.

5) WHERE DO THE EXPERTS BELIEVE HE’LL GO?

Moss is expected to be drafted in the third or fourth round by many NFL experts.

An intriguing option for Moss would be the Tampa Bay Buccaneers in either round. The Bucs have only one third-round pick, which is No. 76 overall, but they do have two picks in the fourth round (No. 117 and No. 139 overall).

With running back Peyton Barber gone elsewhere, the Bucs could use a compliment to complete with second-year halfback Ronald Jones.

Celtics’ Jayson Tatum was nervous after Marcus Smart’s positive coronavirus test: ‘Any of us could have it’

Celtics' Jayson Tatum was nervous after Marcus Smart's positive coronavirus test: 'Any of us could have it'