At least three people were killed and dozens were injured on Sunday after falling snow triggered a pileup on a major interstate that stretches across Wyoming, according to officials.

The crash happened on Interstate 80 in the early evening hours near the city of Rawlins, which is about 180 miles west of Cheyenne.

The Wyoming Department of Transportation said early Monday the highway was closed due to "winter conditions" and crashes and is expected to remain closed until Tuesday.

A traffic camera in the area of the crash showed trucks still parked on the highway Monday as snow continued to blow over the roadway. 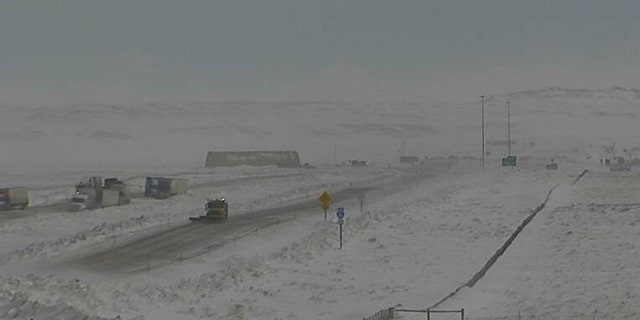 Trucks can be seen parked int he area of a major pileup on Interstate 80 in Wyoming on Monday. (Wyoming Department of Transportation)

Besides the three killed, about 30 people were taken to the emergency room at Memorial Hospital of Carbon County in Rawlins, hospital spokeswoman Stephanie Hinkle told the Casper Star-Tribune.

Officials at the 25-bed hospital expected more injured people to arrive Monday. They called in three extra doctors and set up a temporary patient holding area in a cafeteria.

A video posted to YouTube by David Cuarezma showed the aftermath of the crash. Cuarezma described I-80 as the "most dangerous road in United States." In the video, the wreckage of semi-trucks and other debris can be seen on the roadway. Animals that were being transported can also be seen walking on the snow-covered roadway.

Cuarezma said he saw several people injured and the sounds of crunching metal from additional collisions could be heard in the distance.

Another post to Facebook from the scene showed a mangled truck carrying cows, which were looking out from the wreckage.

The crash caused a 200-mile stretch of westbound I-80, from Laramie to Rock Springs, to be shuttered. Wyoming Department of Transportation officials said the highway could reopen early Tuesday.

The National Weather Service had issued winter weather alerts in the region at the time due to two to six inches of snow forecast for areas west of Interstate 25.

Forecasters predicted snow driven by wind up to 50 mph would continue to affect travel.

Kansas unanimous No. 1 in week of AP Top 25 upheaval