Winthrop to 11th NCAA Tournament with 76-68 win over Hampton

Winthrop to 11th NCAA Tournament with 76-68 win over Hamptonclose 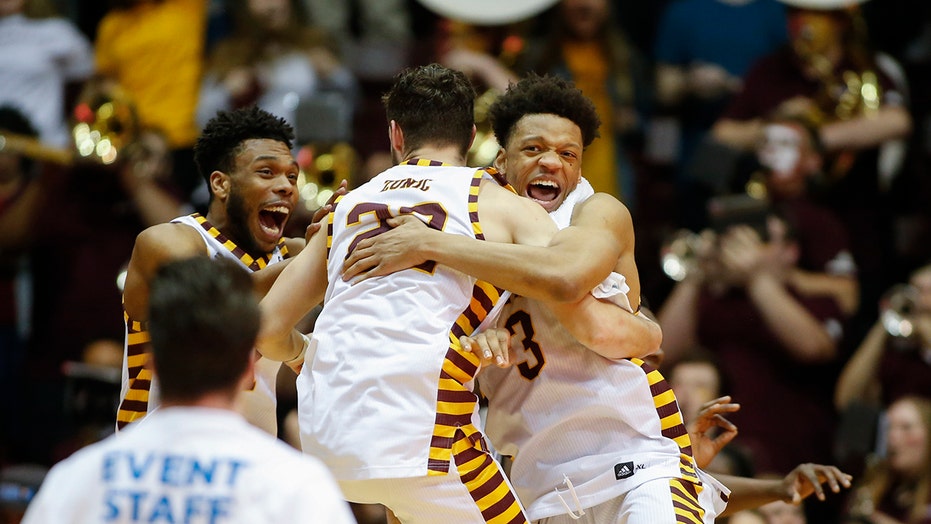 It took a freshman to bring Winthrop back to where it almost always used to go — the NCAA Tournament.

DJ Burns scored 16 points, 12 of them in the second half, to lead the second-seeded Eagles to a 76-68 win over fifth-seeded Hampton on Sunday in the Big South Conference championship game.

It is Winthrop's 11th tournament appearance — all since 1999 — but only the Eagles second in the past 10 seasons.

Winthrop coach Pat Kelsey blew a kiss to his wife and children and Hunter Hale threw the ball almost into the rafters as the buzzer sounded. Then the students, let in free at the university president's declaration on Twitter, stormed the court.

His bucket with 7:47 left put the Eagles up 53-46. Hampton wouldn't close within a possession the rest of the way.

Hampton's Jermaine Marrow, the nation's third leading scorer at 25 points a game, was held to 18 points. The senior played all but three minutes over the Pirates three tournament games, scored 32 in a quarterfinal win over Gardner-Webb and 36 in the semifinal win over top-seeded Radford.

Ben Stanley added 15 points for the Pirates. Stanley and Greg Heckstall, who had 16 rebounds, also played all 40 minutes for Hampton, who appeared to tire toward the end of the game.

Josh Ferguson had nine point and nine rebounds for Winthrop.

Hampton: The Pirates needed a huge game from Marrow, whose went 6-for-11 on 3-pointers in the semifinal win and didn't quite get it. The senior was 5-of-19 from the field and 1-of-10 on 3-pointers. Still, it was a run like few have seen in the Big South for the Pirates in their second season in the league.

Winthrop: The Eagles needed balance and got it. Nine of the 10 players who got on the court scored and four ended up in double figures.

Hampton: The season is over and the Pirates will need to figure out how to replace Marrow.

Winthrop: There's a Selection Sunday party in Rock Hill next Sunday, where the Eagles could sneak as high as a 15 seed.