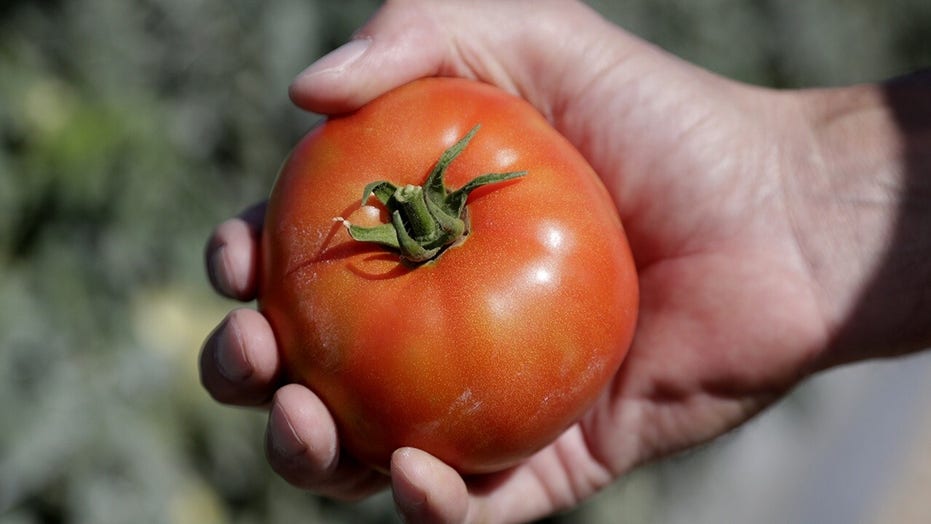 How COVID-19 impacts the US farming industry

Farmers across America are facing severe economic hardship due to the coronavirus; Western Growers president and CEO, Dave Puglia weighs in.

As the coronavirus pandemic continues to wage a silent war across the country, American farmers are being forced to pour out milk, crush eggs, toss fresh fruits and vegetables, euthanize livestock and plow under perfectly robust crops

So what has gone wrong?

A dramatic dip in demand, weak links in the highly consolidated supply chain, and decades of industry monopolization, experts say.

“A large portion of our food is now produced for restaurants, hotels, schools, and institutional users, about 50 percent. Those markets have effectively closed up, and there is not enough demand for home use now,” Dan Glickman, Executive Director of the Aspen Institute and former U.S. Secretary of Agriculture, told Fox News. “Nor is the supply chain set up for this rapid transformation.”

From his purview, the supply chain has become very centralized, especially in meat and poultry.

“This move towards concentration of food processing has been a general trend for many years and has been done for efficiency and cost-cutting purposes. But we now see how it is impacted by a single event like COVID-19, where workers have been so impacted,” Glickman continued. “Four companies control about 70 percent of meat production. We no longer have a decentralized food production process, at least not to the extent of 30 years ago.”

And the extent of produce waste and revenue alone is stunning. The United Fresh Produce Association, according to Politico, predicts its members are losing out on up to $1 billion per week.

“Before the pandemic, U.S. consumers purchased about a third of their calories and spent over half of their food dollars on food consumed outside of their home – restaurants, fast food, schools, work cafeterias, etc.,” explained Dr. Douglas Jackson-Smith, a professor at the School of Environment and Natural Resources at Ohio State University. “The closure of these outlets and stay-at-home orders have radically changed where most Americans buy and consume their food, and the supply chains have been slow to reorganize and respond.” 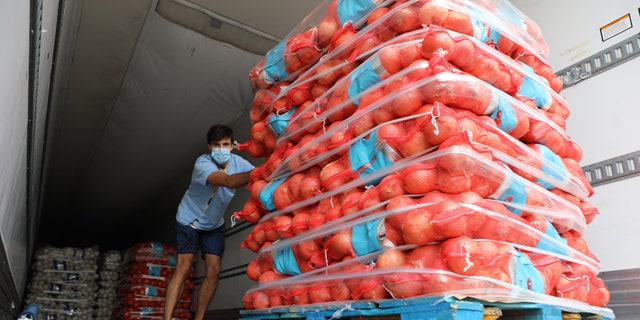 A shipment of onions was delivered from farms to a food bank in need amid the coronavirus pandemic. (Courtesy of Aidan Reilly)

The farmers who are dumping milk and plowing under produce have thus lost customers and markets that buy products in bulk, he continued. Moreover, a large fraction of U.S. milk is used to produce mozzarella cheese, most of which is used in pizza sold through retail chain outlets – and stay-at-home orders have significantly reduced the volume of demand for pizza cheese.

“In regions where this is the primary end-use for the bulk of local milk supply, it is not easy to pivot to smaller retail sized packaging or non-cheese products,” Jackson-Smith noted. “A lot of the food supply chain was built to supply commercial and retail foodservice outlets. It is difficult for many of these companies to change their production practices and distribution systems in the space of a few weeks.”

For some farmers, it has taken less mental anguish to kill their animals and decimate their crops than to simply standby as they suffer and rot away as the summer approaches. The stark images on social media of dumped potato mountains and fresh milk gushing into the earth has been especially haunting given that food banks, according to Feeding America, have experienced a 70 percent uptick in demand since the virus took hold and millions lost their livelihoods.

Keiko Tanaka, a professor of Rural Sociology at the University of Kentucky, underscored that of the two main supply-chains in the U.S. food industry – one for household consumption and the other for commercial use – more than half the spending comes from the large-scale commercial side, which has been practically decimated.

And making an immediate shift for the sudden demand change, she noted, is far from simple. Milk processors, for example, “do not have the equipment to package [excess milk] into smaller containers for grocery stores and retail use” when there has been already a glut of cheese and other dairy products with longer shelf lives.”

“Like vegetable and fruit farmers, dairy farmers have little choice but to dump excess milk,” Keiko and her team of researchers stated. “Different reasons are at work for each food supply chain that makes it unfeasible to easily or quickly divert the food supplies for commercial use to household use. Among them are labor shortages, falling prices, and mismatches in the facilities and equipment.” 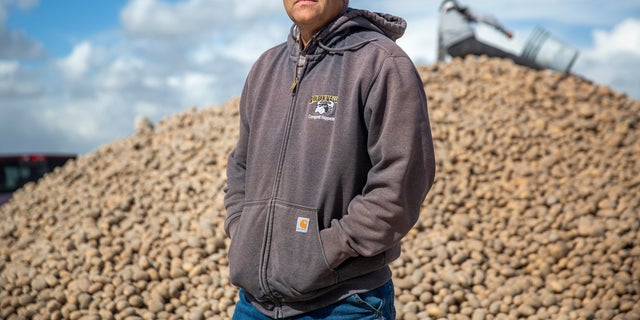 Ryan Cranney poses for a portrait next to a mound of potatoes he's made free to the public Wednesday, April 15, 2020, at his farm in Oakley, Idaho. Cranney says due to a lack of buyers with restaurants being closed in response to the coronavirus, he has had to dump 500,000 pounds of potatoes. 'A lot of people that are coming here haven't been coming for themselves,' he says. 'They're grabbing them for people in need.' (Pat Sutphin/Times-News via AP)

In addition, tens of thousands of piglets have undergone forced abortion in recent weeks amid the diminished demand. Millions of chickens have been slaughtered – and not for food.

In April, the biggest meat companies not only in the U.S. but the world – including Cargill Inc., Tyson Foods, JBS USA, and Smithfield Foods – were compelled to suspend production at some 20 slaughterhouses nationwide, triggering concerns of a mass meat shortage.

Data released earlier this month by the Centers for Disease Control and Prevention showed nearly 5,000 plant workers in 19 states had tested positive for the virus as of April 27, likely due to the close working conditions. The subsequent threat of a meatless America prompted the Trump administration in late April to invoke the Defense Production Act, which ultimately mandates that the processing facilities remain open throughout the crisis.

But as Jackson-Smith pointed out, requiring plants to be open will require a labor force, and meatpacking plants have one of the more vulnerable workforces in the food sector.

“The consolidation of the meat processing sector means that the loss of a handful of very large processing sites can impact a large fraction of the nation’s meat supply,” he said.

More broadly, food production, processing, and distribution became increasingly concentrated and consolidated since the 1980s and 1990s when the U.S. passed laws and enacted policies that relaxed antitrust laws and encouraged agribusiness mergers and acquisitions.

“This has led to increased centralization and consolidation in the food system whereby a smaller number of very large integrated firms control the processing, distribution, and sale of food in the U.S. and globally,” Jackson-Smith explained. “Concentration is particularly notable in meat and dairy, where a few very large firms control the processing and distribution of the majority of output in the U.S.”

For one, vegetables and fruits that were initially supposed to be purchased by institutional buyers no longer had an immediate buyer – and a short window of time to buy another before they were no longer sellable. 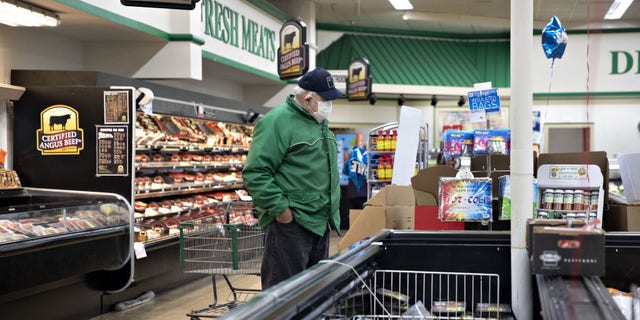 A shopper browses in the meat department at a supermarket in Princeton, Illinois, U.S., on Thursday, April 16, 2020. The Trump administration would like to make purchases of milk and meat products as part of a $15.5 billion initial aid package to farmers rattled by the coronavirus, said Agriculture Secretary Sonny Perdue. (Bloomberg via Getty)

The overall waning of farming, experts contend, has come to a head during the crisis.

According to the USDA data, the number of farms declined rapidly from a peak of 6.8 million in 1935 to 2.05 million in 2017 while the average size increased 155 acres in 1935 to 444 acres in 2017. Furthermore, changes in the interpretation of antitrust laws since the late 1970s, Tanaka highlighted, have enabled firms to make mergers and acquisitions that would not have been allowed previously. In 1968, the U.S. had 10,000 meat processing plants, and now there are approximately 3,000. Of those 3,000, only a few account for the majority of animals processed.

“A recent New York Times article also claimed that among the 800 USDA inspected slaughterhouses in the U.S., only about 50 factories slaughter and process 98 percent of beef, and many of these facilities are owned and operated by the four big meat companies,” she said. “COVID-19 outbreaks at food processing facilities have exposed how food processing is a huge bottleneck in our food system. One-size-fits-all regulations for food safety and health disadvantage small- and medium-scale professors and mom-and-pop retailers.”

But in an effort to ease the burden on the agricultural sector, last month, the Trump administration announced the Coronavirus Food Assistance Food Program, which will issue $16 million in payments to ranchers and farmers. It also allots $3 billion in bulk purchases of dairy, meat the produce to be dispersed through food banks.

While the federal aid is welcomed, many worry it won’t be enough to revive the country’s bread and butter – so to speak – in anywhere close to what is necessary.

According to the leading farmer trade group, the American Farm Bureau Federation, the aid package will not pay for livestock that is winnowed. In a statement to Reuters, the USDA said the payment program “is still being developed, and the agency has received more requests for assistance than it has money to handle.” 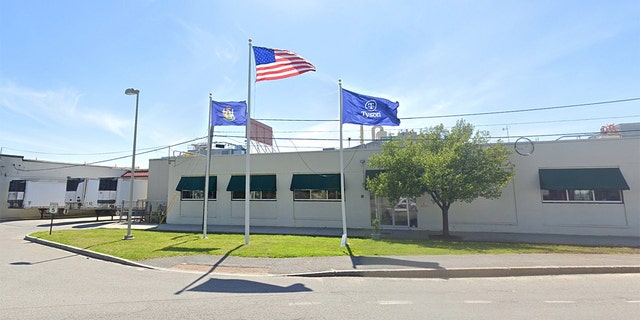 Furthermore, the relief is likely to be far from immediate. Officials anticipate it could take upwards of a month for food to be packaged and redirected to foundations, food banks, and other places in need.

So what is needed to prevent such disruptions to the U.S. food economy in the future?

Nonetheless, other experts caution that sweeping changes come with their own set of financial woes.

“The challenge here is that the reforms may cost more than the waste that is currently occurring. Sometimes it is simply better to let a farmer pour milk down the drain, and compensate that farmer – not all dairy farmers – for their losses,” added Vincent Smith, a professor in the Department of Agricultural Economics at Montana State University. “This is a short-term crisis, and so simply providing food aid cash transfers to the households facing hunger and letting the private market respond is likely the best approach.”