Protests erupted in New York City on Tuesday while Portland saw multiple demonstrations in response to a police shooting in Philadelphia that resulted in the death of a Black man.

Dozens of protesters were arrested Tuesday night in Brooklyn after hundreds took to the streets. There were reports of damage to property in the downtown area. 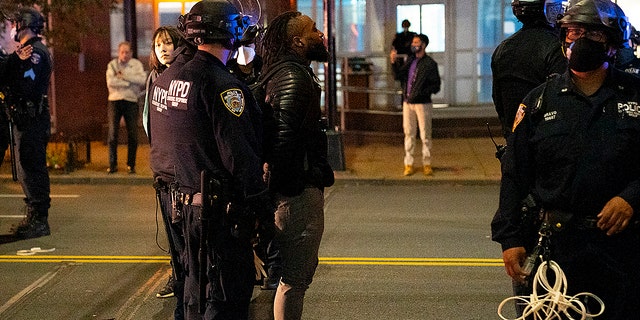 "Due to protest activity in downtown Brooklyn, expect vehicular traffic & a large presence of emergency personnel in the area. Consider alternate routes and allow for additional travel time," the NYPD wrote on Twitter.

Authorities said police vehicles were damaged during the unrest. Trash cans, including an American flag, were also set on fire, according to videos posted on social media.

“Burn the precinct to the ground, every city, every town!” the group reportedly shouted.

The protesters were met by police in riot gear around 10 p.m. near Boerum Place, a train station in Brooklyn, reports said.

Several officers were injured when a car tried to drive through a group of cops, a police spokesperson told NBC New York. A video showed police attempting to stop the sedan. At least one officer tried to break the vehicle's windows with a baton.

After being ordered to stop, the car drove through a line of bicycle cops, reports said.

About 30 protesters were arrested during the night, according to the station.

In Portland, Ore., three separate demonstrations took place, including more than 100 protesters who gathered in the city's downtown area for a vigil in memory of Wallace, reports said.

The group lined the steps of the Justice Center on Tuesday night and observed a moment of silence around 7:30 p.m., before singing, according to The Oregonian. During the vigil, a speaker told the crowd to "Say his Name!" The crowd responded, "Walter Wallace!"

The group, which marched in solidarity with the Black Lives Matter movement, called on Ryan to further defund the Portland Police Bureau (PPB), Portland's KGW reported.

“Dan Ryan, don’t be a villain. Defund PPB by 18 million," the protesters allegedly shouted from outside his residence, according to video on social media.

A third group gathered at King School Park in Northeast Portland before marching on Martin Luther King Jr. Boulevard around 10 p.m., the station reported. Police warned them to "be mindful of those who live in this community."

Protests in Portland, which have often turned violent, have been a regular occurrence in the city since George Floyd died in police custody in Minneapolis on May 25.

The demonstrations in New York City and Portland came amid two consecutive nights of unrest in Philadelphia, which reportedly saw upwards of 1,000 looters targeting businesses in the city on Tuesday.

Officials said Wallace — who was killed on Monday — was armed with a knife and charged at two officers, prompting them to open fire.

Video of the incident posted to social media by a bystander appears to show the officers pointing their guns at Wallace while ordering him to drop the weapon.

Rodney Everett, Wallace's uncle, said the officers could have used other tactics to de-escalate the situation.