The Iranian ships repeatedly crossed in front and behind the U.S. vessels at extremely close range and high speeds, including multiple crossings of one ship, the Puller, with a 50-yard closest point of approach and within 10 yards of another ship, the Maui's, bow, a 5th Fleet statement said. 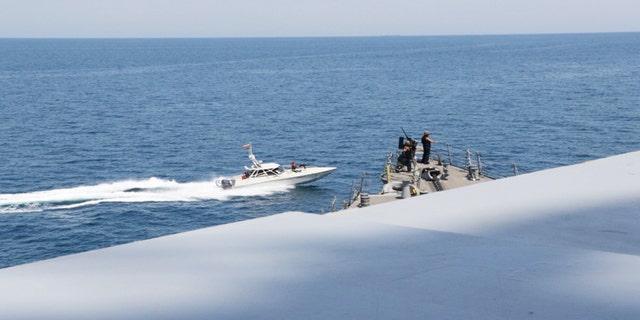 The U.S. crews responded to the infractions by issuing multiple warnings via radio – including five short blasts from the ships' horns and long-range acoustic noise maker devices, but received no response from the IRGCN, the statement said.

After approximately an hour, the Iranian vessels finally responded to the radio queries, before maneuvering away from the U.S. ships and increasing the distance between them, the 5th Fleet reported.

FEINSTEIN URGES TRUMP TO REVERSE PLAN TO BLOCK IRAN REQUEST FOR $5B IN IMF AID, CLAIMS IT IS IN ‘OUR NATIONAL INTEREST’

Besides the Puller and Maui, the Navy reported the following ships were involved in the exercises: USS Paul Hamilton, USS Firebolt, USS Sirocco and USCGC Wrangell.

The Navy statement said the Iranian's dangerous and provocative actions “increased the risk of miscalculation and collision” and were in violation of international maritime “rules of the road” as well as not in accordance with international law to act safely with other vessels in the area.

The U.S. Navy, Coast Guard, Marines and Army have been conducting joint interoperability operations in the North Arabian Gulf since late March.
Fox News' Louis Tomlinson contributed to this report.