University of Missouri officials said Friday that a statue of former president Thomas Jefferson will remain in place on its Columbia campus despite a student petition calling for its removal.

More than 3,000 people signed Mizzou student Roman Leapheart’s Change.org petition demanding the school remove the statue. Leapheart cited Jefferson’s history as a slave owner in the petition, arguing the statue was located where “thousands of black students pass by every day, forced to deal with imagery of the past in the future where we should be promoting equality, diversity and inclusion.”

University of Missouri System President Mun Choi met Thursday with Leapheart, three of the school’s curators and leaders of the Legion of Black Collegians to discuss concerns related to the statue. 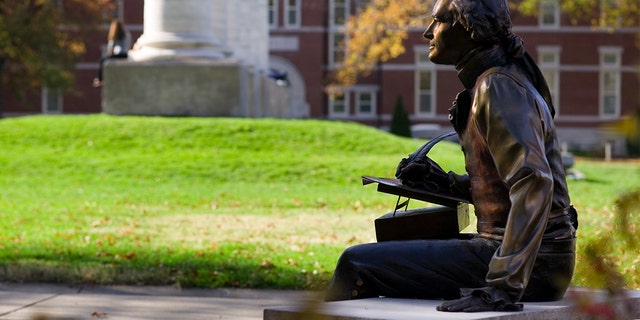 COLUMBIA, MO – NOVEMBER 11: Statue on the campus of the University of Missouri on November 11, 2005 in Columbia, Missouri. (Photo by Wesley Hitt/Getty Images)

“The conversation was an example of the power of civil discourse and included discussion of complex issues and different perspectives,” Choi said in a statement. “After further discussion with other curators, the university decided not to remove the Jefferson statue. We learn from history. We contextualize historical figures with complex legacies. We don’t remove history.”

“We are committed to maintaining open lines of communication, including continuing conversations and learning from all involved,” Choi added.

Protestors have targeted statues and monuments of historical figures in several states over the last few weeks.

A statue of Christopher Columbus was beheaded by protestors in Boston earlier this week. Statues of figures from Confederate history were vandalized or destroyed throughout several Southern states.

Leapheart said he plans to continue his effort to have the Jefferson statue removed.

“I’ve put a lot into this but I’m not giving up hope,” Leaphart told the Kansas City Star. “I believe too much in what I stand for.”