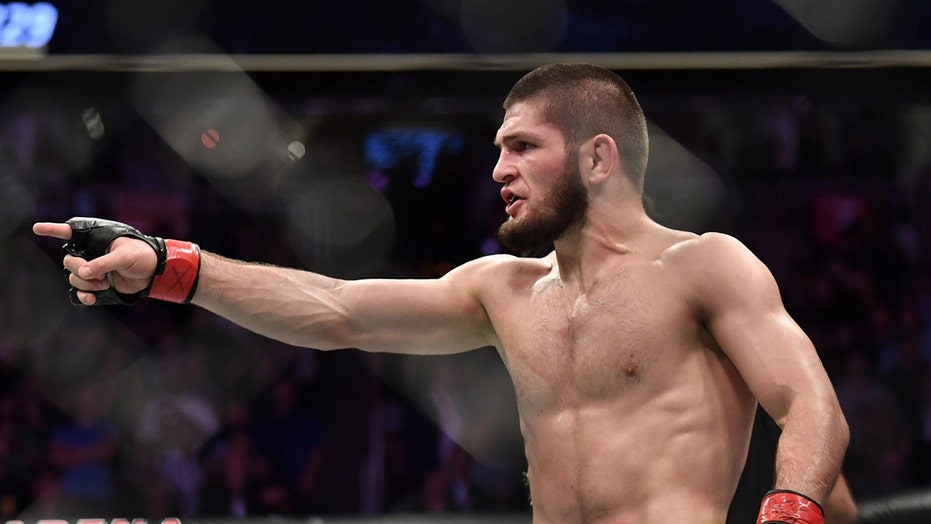 UFC lightweight champion Khabib Nurmagomedov’s title defense against Tony Ferguson at UFC 249 on April 18 may be in doubt.

Nurmagomedov revealed on Instagram Live on Monday that he is stuck in his home country of Russia due to the coronavirus pandemic. He flew home to Dagestan after he learned that his fight wouldn’t take place in the United States and now, due to a travel ban in Russia, he is unable to leave.

"We were training in the (American Kickboxing Academy) without any information regarding the fight, where and how is it going to happen," Nurmagomedov said according to a translation by RT Sport. "Then the UFC told us that the fight 100 percent isn't happening in the States. And they said that 99 percent that it will happen in (the United Arab) Emirates, Abu Dhabi."

Around one month before the date of the fight, Nurmagomedov said he and his team decided to fly to the Emirates but, due to impending travel restrictions in the country, they returned home shortly after.

UFC president Dana White, who said the fight will go on despite the promotion being forced to cancel its last three events, also claims that the UFC wants to proceed with the event even if Nurmagomedov can't be on the card, according to the lightweight champion.

"So now I am hearing that they are looking to organize it with or without me. OK, go ahead," Nurmagomedov said. "Everyone should follow the laws. I am not against it, I know that fighters need to feed their families and pay their bills.

“I know how hard it is for the fighter,” he added. “Unless they fight they aren't getting any money. I am even hearing that they are looking for an opponent for Tony, because he is in the States and I am here in Russia. But I am here not on my own will."

According to ESPN, top contender Justin Gaethje is the replacement opponent who's been offered to Ferguson, even though it has neither been agreed upon nor finalized. The location for the event is also reportedly yet to be decided.

Nurmagomedov and Ferguson have never fought, despite previously being booked to do so four times. The title fight was arguably the most anticipated matchup of 2020.

North Korea rips Pompeo, says ‘if the US bothers us, it will be hurt’