Dubai: Retail chains have reassured consumers in the UAE that they have enough stock of food supplies and other commodities and there is no need for panic buying in the wake of preventive measures being taken against COVID-19.

A spokesperson from Lulu Group said the retail chain is procuring food supplies from various countries.

“We are working very closely with all the prominent brands and also through our own sourcing offices to ensure enough food items are maintained in our stock. We are fully equipped to handle any situation right now. There is enough stock in our warehouses and our online business is also robustly handling the situation. We have increased our vehicle fleet to manage the delivery of orders through our webstore.”

“We want to reassure customers that there is no scarcity in the local market or our shops. There is absolutely no need of a panic situation.” 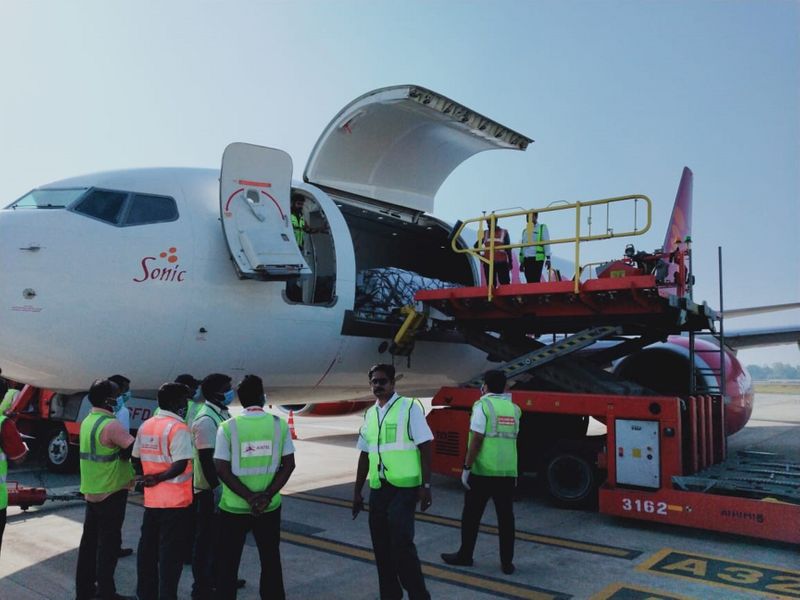 Lulu group’s special chartered flight "SpiceXpress" from Kochi to Kuwait with 16.5 tonnes of fruits and vegetables after touching down at Kuwait International Airport on Sunday. The retail giant said it will arrange more cargo flights if required for the region. Image Credit: Supplied

The spokesperson said the group has gone to the extent of chartering flights to supply food items to countries that have stopped passenger flights.

“In fact, countries where commercial flights have been disrupted, we have chartered exclusive cargo planes to bring in food stuff, especially fresh fruits and vegetables. First such flight landed in Kuwait last night,” he said.

Meanwhile, Union Coop has denied the consumer cooperative chain is closed due to corona scare.

The chain confirmed that it did not receive any instruction from competent authorities to close its branches, noting that any such information being circulated through social media pages is nothing but a rumour.

He stressed the ready availability of food stocks in the UAE to face any unpredictable or emergency circumstances. 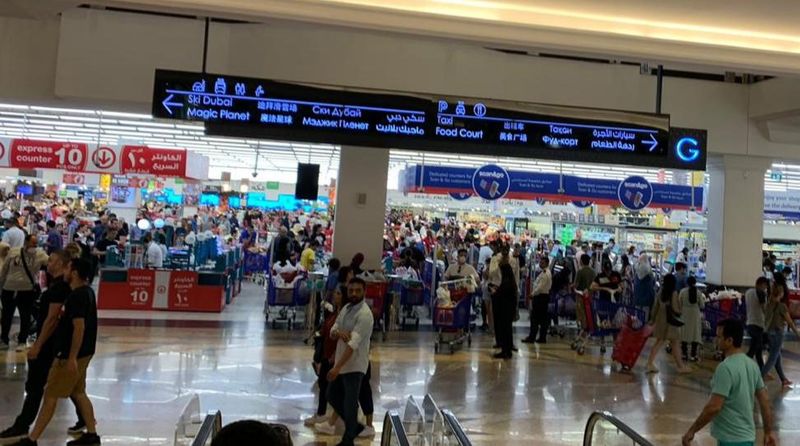 A view from Carrefour in Mall of the Emirates on Monday night, March 16 Image Credit: Supplied

“We have enough food stocks and other alternatives, where the consumers can order either through home delivery service or through the Union Coop smart app.”

Al-Bastaki asked the public not to circulate rumours, and refer official channels.

He said agreements have been made with various suppliers and companies to ensure the continuous flow of materials and to maintain the stock in Union Coop warehouses, which is sufficient for long periods of up to six months for basic food and consumer goods.

While aisles are packed with shoppers trying to stock up on essentials, some retailers said they are mulling to extend opening hours. 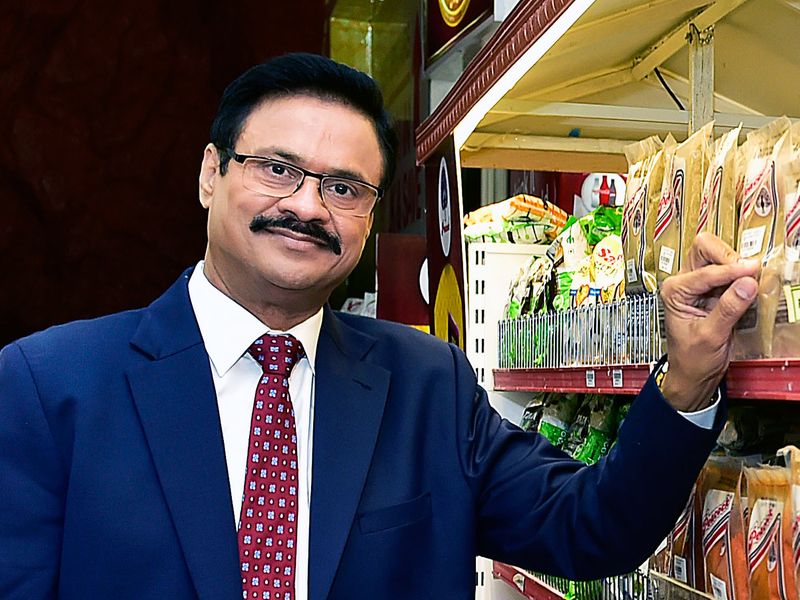 Dhananjaya Datar, managing director, of the Indian supermarket chain Al Adil, reported a rush in all his 43 outlets across Dubai. “This kind of a rush is unprecedented and we have had to keep all our stores open until late in the night. We usually open only in the evenings on Friday, but we plan to keep the store open all day this approaching weekend. “

Datar said the traffic was equally big on the online store. “On both online and in the shops people are making bulk buys on four, rice, lentils, oil, millets as well as ready to eat snacks, seeds, nuts and many heat and eat foods such as breads and parathas.”

UK expatriates, Samantha Armstong and her husband David, parents of a nine- year old boy, began buying a little more than usual for the last two weeks. “We are reassured and confident about things here and the way it has been handled up till now. We haven’t panicked so far but from the last two weeks we have begun buying longer lasting good, the tinned and frozen varieties to avoid too many visits to the supermarket. We are buying frozen and canned food such as tuna, meats, vegetables, soaps tissues etc. Our weekly bill hasn’t gone up much, but now we are buying food that has a longer shelf life. All the store in our area are pretty well stocked, but home delivery now has gone up from a few hours to up to 48 hours now.”

G. Balagopal, an Indian expatriate living at Business Bay, said he was spoilt for choice with three well stocked supermarkets in his neighbourbood. “I don’t think panic has set in as yet. My wife Nithya and I are just being extra cautious and buying extra stuff, mainly long-lasting provisions such oats, rice, dehydrated milk powder, flour, lentils, dosa powder, frozen fruits and vegetables and canned fish. Our budgets have gone up a little for this month as food bills are a little high, but it’s all being done to avoid too many visits to crowded stores.”

Elmer O Casao, a Dubai resident who lives singly with a cluster of four or five Filipinos, said he and his friends were stocking up on rice and canned food. “We require about 15 kg rice per week and we are making sure we have enough of that along with canned fish, meat, frozen vegetables and of course, a bulk load of sanitisers, soaps, floor cleaners, tissues to maintain a high level of hygiene at home.”

His Highness Sheikh Mohammed bin Zayed Al Nahyan, Abu Dhabi Crown Prince and Deputy Supreme Commander of the UAE Armed Forces has said food and medicine is a red line and residents need not worry about their supplies.

“Don’t worry about food and medicine in the country. We will provide it always,” he was seen saying in a video of a meeting with His Highness Sheikh Mohammed bin Rashid Al Maktoum, Vice-President and Prime Minister of the UAE and Ruler of Dubai on Sunday. 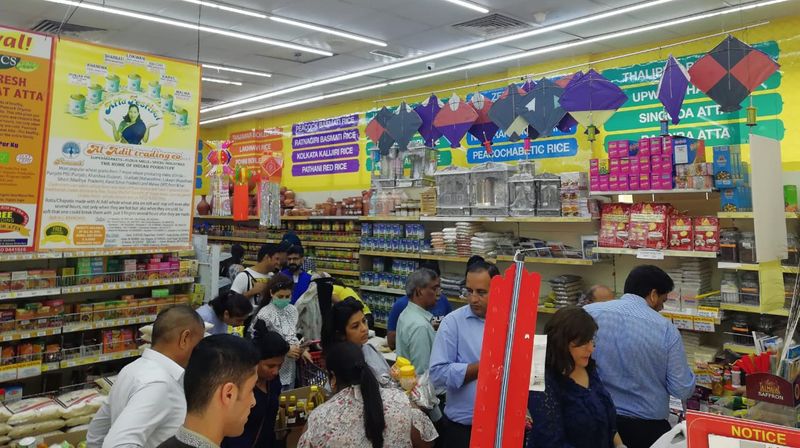 A view of shoppers stocking up in Al Adil on Monday night, March 16 Image Credit: Supplied

The UAE’s Ministry of Economy issued a statement on Twitter on Sunday rubbishing rumours of unavailability of good and called on people to pay no heed to gossips.

“The UAE markets are in good condition in terms of the availability and diversification of goods of various types, particularly basic, food and medical commodities, and it calls on consumers not to be tempted by the rumors.” 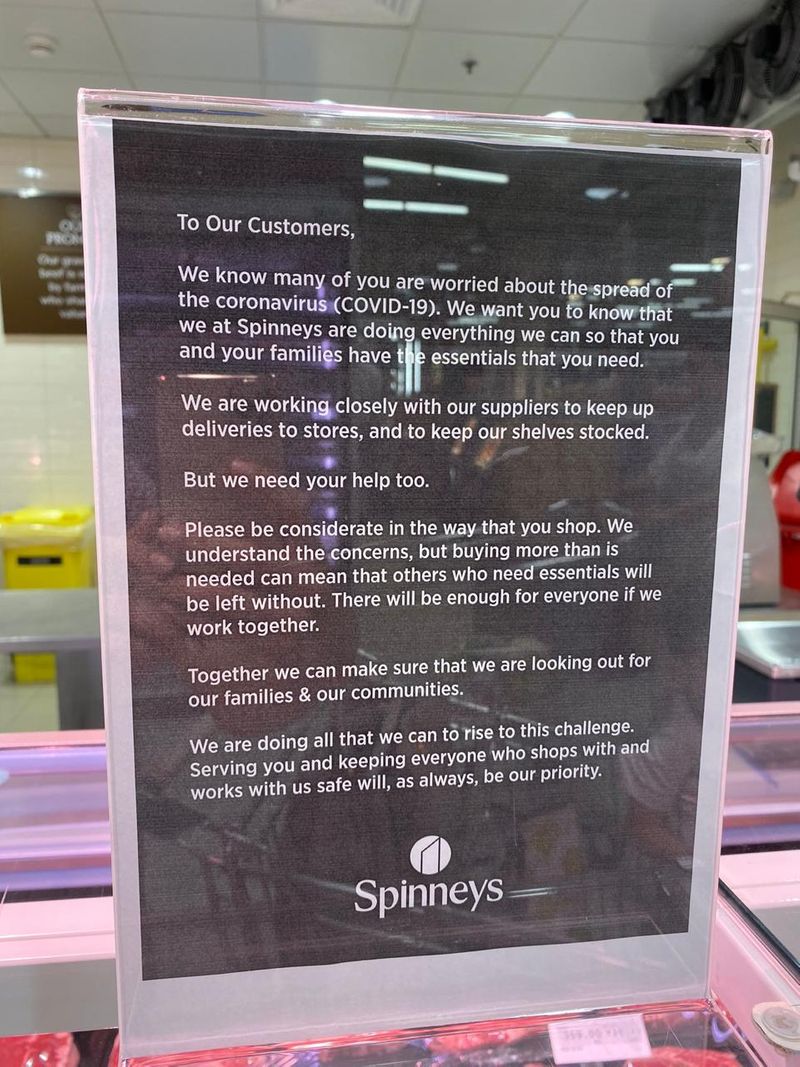 A notice on panic buying inside a local spinneys store Image Credit: Supplied

All individuals who spread rumours about coronavirus on social media will be temporarily imprisoned, the UAE Attorney-General Dr Hamad Al Shamsi said on Monday.

Rumourmongers may be jailed for a minimum term of a year if they spread rumours punishable by law that are considered a crime. However, it may be less than a year depending on the crime they commit, the attorney general said.

Abu Dhabi: Shoppers across the capital have been urging one another not to panic buy. The general consensus is that people should only be buying what they need in order to stay home as much as possible.

Linda Cerminara, 34, a marketing consultant from Canada, said it is also 'unhealthy' to share pictures of empty supermarket shelves.

"A few days ago, I received some pictures of empty pasta shelves at a popular hypermarket. But the very next day, when I went, they were restocked. The point is that there is stock, as the UAE has established, and sharing these pictures just promotes panic buying. Many people are impressionable and rely on others to make decisions, so the more pictures we share of panic buying, the more we promote it," Cerminara said.

She added that the UAE houses a unique community, and it has an opportunity to avoid the pitfalls of panic buying.

Residents on a social media forum also pointed out that smaller supermarkets appeared to have pretty much all their regular products because people who frequented them tended not to buy in bulk.

"The most important thing is that you can always buy alternative products. If you cannot find the rice you always buy, there is always another you can get for a while. So there is absolutely no reason to panic buy," said Mohammad Z, another long-term resident from Bangladesh.