KASTANIES, Greece (AP) — Syria’s official news agency said two of its warplanes were shot down by Turkish forces inside northwest Syria, amid a military escalation there that's led to growing direct clashes between Turkish and Syrian forces.

SANA says the jets were targeted over the Idlib region, and that the four pilots ejected with parachutes and landed safely. These confrontations have added to soaring tensions between Turkey and Russia, which support opposing sides of the Syrian civil war.

Turkish President Recep Tayyip Erdogan on Saturday announced his country had opened its western borders to migrants and refugees hoping to head into the European Union. The United Nations said Sunday that at least 13,000 people were massed on Turkey’s land border with Greece,

Erdogan did not explicitly link his decision to open the gates to Europe to the military escalation in Syria’s northwestern Idlib province. However, he has warned that Turkey “can’t handle a new wave of migration,” an apparent reference to Idlib where hundreds of thousands of desperate Syrian civilians fleeing Syrian troop advances moved toward the Turkish border. 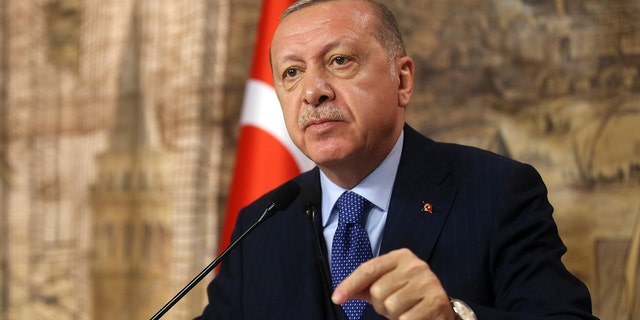 Turkey's President Recep Tayyip Erdogan speaks to his ruling party's lawmakers, in Istanbul, Saturday, Feb. 29, 2020. Erdogan said Saturday that his country's borders with Europe were open, as thousands of refugees gathered at the frontier with Greece.(Presidential Press Service via AP, Pool)

Turkish Defense Minister Hulusi Akar, speaking from military headquarters near the Syrian border, said Turkey aimed to confront Syrian government forces rather than Russian troops. He called on Moscow to persuade Syrian President Bashar Assad to withdraw to 2018 cease-fire lines on the edges of Idlib.

Referring to losses inflicted on Syria, he said Turkey had “neutralized” more than 2,200 Syrian troops, 103 tanks, and eight helicopters.

The operation is Turkey's fourth in the war-torn country since 2016.

DANIEL DAVIS: ALL US TROOPS SHOULD LEAVE SYRIA – WE SHOULDN'T GET SUCKED INTO WAR

The heavy fighting in northwest Syria has also triggered a humanitarian catastrophe and the single largest wave of displacement in the nine-year Syrian civil war. 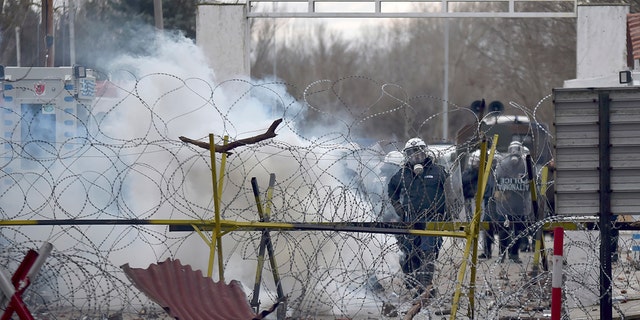 Turkish President Recep Tayyip Erdogan's decision to open his country's borders with Europe made good on a longstanding threat to let refugees into the continent. His announcement marked a dramatic departure from the current policy and an apparent attempt to pressure Europe into offering Turkey more support in dealing with the fallout from the Syrian war to its south.

The U.N.’s International Organization for Migration said Sunday that by the previous evening, its staff working along the Turkish-Greek land border “had observed at least 13,000 people gathered at the formal border crossing points at Pazarkule and Ipsala and multiple informal border crossings, in groups of between several dozen and more than 3,000.”

Greek authorities fired tear gas and stun grenades through Saturday to prevent repeated attempts by a crowd of more than 4,000 people massed at the border crossing in Kastanies to cross, and fought a cat-and-mouse game with groups cutting holes in a border fence along the border to crawl through.

Erdogan’s communications director Fahrettin Altun later said Turkey had changed its focus to preparing for the possibility of new arrivals from Syria “instead of preventing refugees who intend to migrate to Europe.”

“Europe and others must take robust action to address this monumental challenge,” Altun said. “We can’t be expected to do this on our own.” 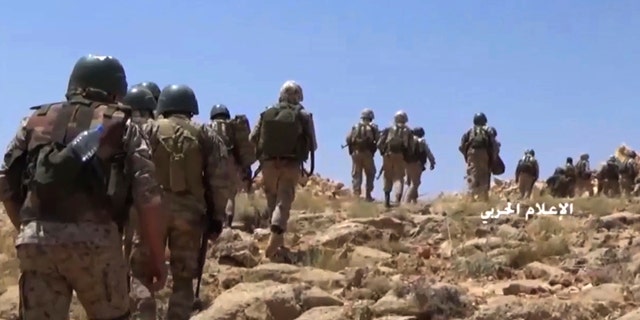 FILE – This file frame grab from video released on July 22, 2017 and provided by the government-controlled Syrian Central Military Media, shows Hezbollah fighters advancing up a hill during clashes with al-Qaida-linked militants in an area on the Lebanon-Syria border. Lebanon's militant Hezbollah group lost at least eight fighters in northwestern Syria in fighting against insurgents and airstrikes by the Turkey's air force following the death of at least 33 Turkish soldiers earlier this week, a Syrian opposition war monitor and the militant group said Saturday. (Syrian Central Military Media, via AP, File)

He accused critics of Turkey’s refugee policy of “rampant hypocrisy.”

He claimed 80,888 had left Turkey for Europe “in the past several days” and called on Europe to share the burden of looking after refugees. But there was no evidence to support his claim. Greece has shut its border, and there were a few dozen arrests of people who managed to cross through the border, Greek authorities have said.

Greek Deputy Defense Minister Alkiviadis Stefanis told the local broadcaster Skai there were around 9,600 attempts to illegally cross Greece’s border during the night Saturday to Sunday. Stefanis said all were successfully thwarted. Previously several dozen migrants had managed to make it through.

Greek officials said they arrested 66 migrants Friday, 17 of whom were sentenced to 3.5 years in jail for entering the country illegally. All Afghans, they were the first migrants sentenced for illegal entry since 2014. On Saturday, Greece arrested another 70 people who tried to cross the land border illegally.

“Turkish soldiers with cutters in their hands were cutting the wires of the fence to lead the illegal migrants” into crossing the border, he said. “The attempt was thwarted by the intervention of our own patrol that happened to be passing that area on patrol at the time, and it repaired the damage in the fence,” he added. 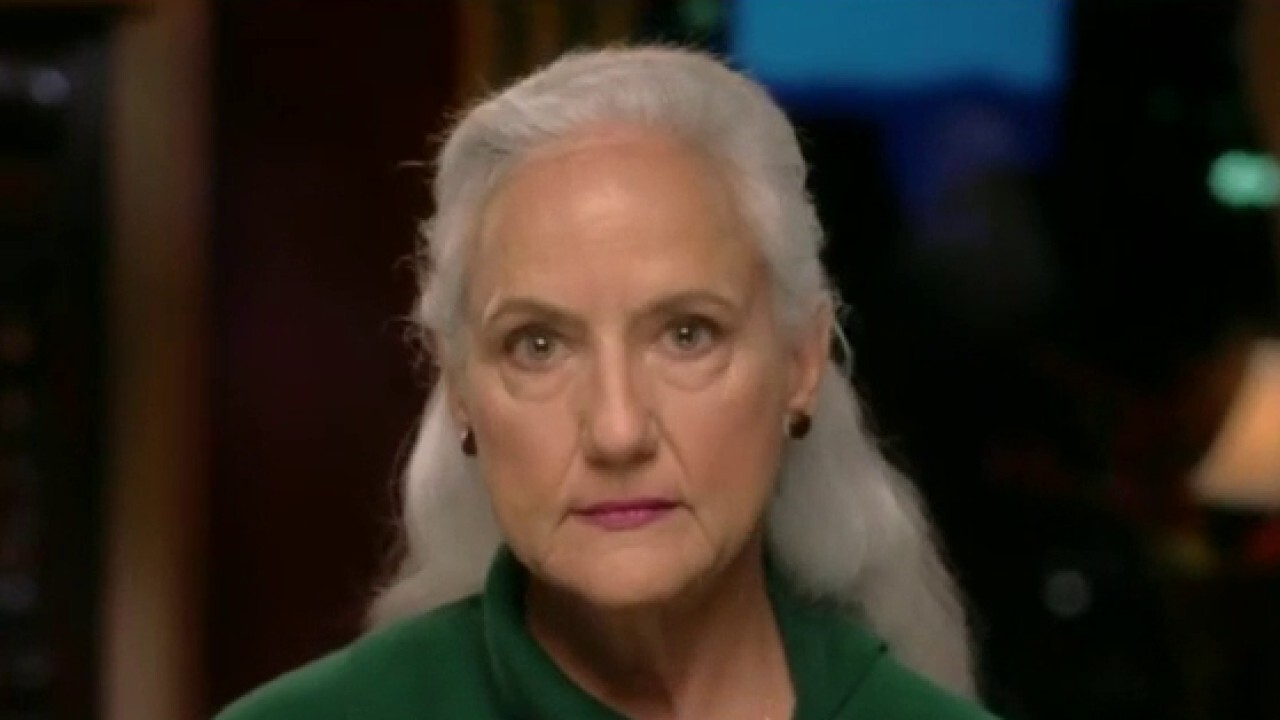 Debra Tice, the mother of an American held captive in Syria, speaks out on 'Tucker Carlson Tonight.'

Twenty-year-old Afghan Ayamuddin Azimi made it to the Greek border village of Nea Vyssa along with a compatriot. He said Turkey had opened its borders “to save the refugees” but when they got to the frontier they found the Greek side closed.

He crossed clandestinely, he said. “What can I do? We have nothing to do. This is our life.”

Others were making the short but often perilous sea crossing from the Turkish coast to the Greek islands.

Initial figures collected by Greece's Merchant Marine Ministry from the coast guard around the eastern Aegean islands showed a clear increase in the number of people arriving by dinghies from the nearby Turkish coast.

By midday Sunday, the ministry said initial figures indicated 390 people had arrived since Sunday morning in several boats. The vast majority arrived on the island of Lesbos, with smaller numbers on Chios and Samos. More were believed to be attempting to reach the islands.

In parallel, the heavy fighting in northwest Syria has pushed nearly 950,000 displaced Syrian civilians to flee toward the border with Turkey.

Turkey is a strong backer of the rebels in Syria’s Idlib province. But the presence of thousands of Turkish troops there has done little to stop Assad's relentless campaign to seize the last rebel-held territories.

Dozens of Turkish soldiers have been killed by the Russian-backed Syrian government forces around Idlib in recent days. 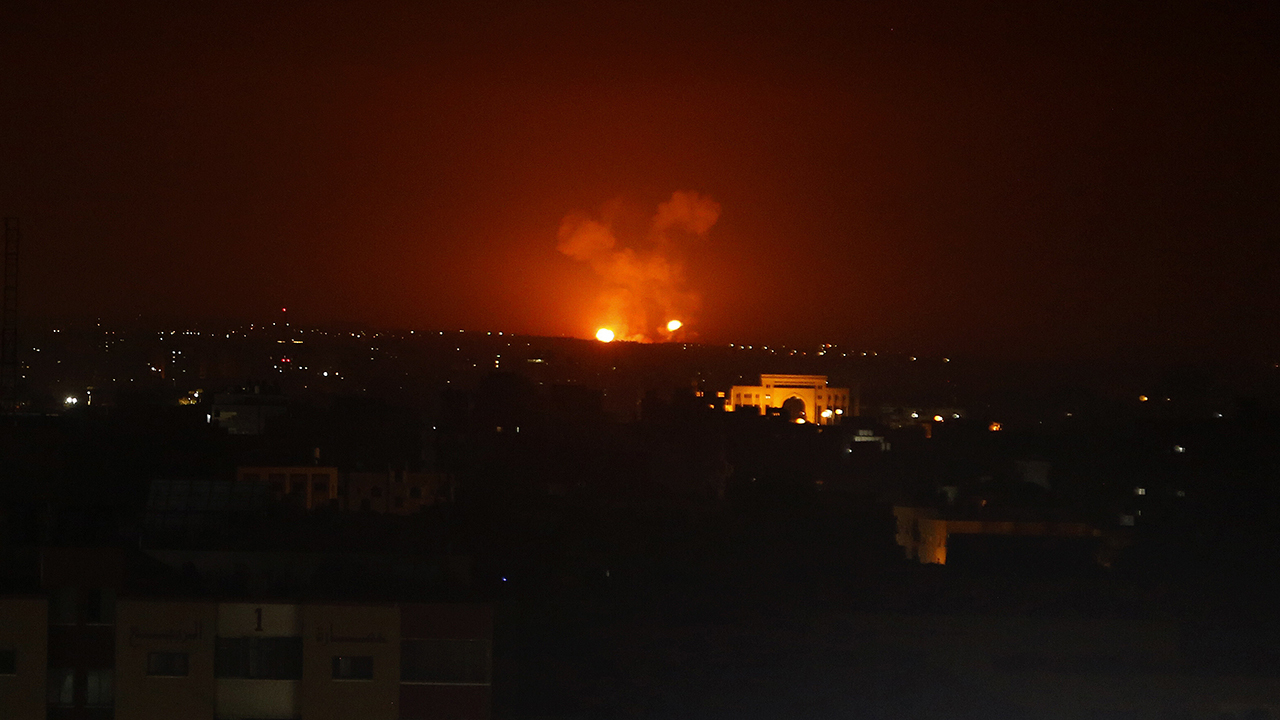 Erdogan has warned of an “imminent” operation against Assad's forces unless they pull back from Turkish lines in Syria by the end of February.

As that deadline passed Saturday night, Turkish drones bombed Syrian government targets in Idlib, and Turkey-backed rebels shelled Syrian army positions. Fighting raged near the strategic town of Saraqeb as government troops sought to take it back from rebels, opposition activists and Syrian state-media said. The town, which lies on the Damascus-Aleppo highway, had changed hands several times in the last month.

Turkey has lost 55 soldiers in Idlib in February, including 33 killed in an airstrike on Thursday, and now feels the need to respond strongly. Talks between Turkey and Russia, the main power brokers in Syria, have so far failed to defuse tensions.

On Saturday, Erdogan said Turkey would no longer stand in the way of refugees and migrants already in the country who hope to head to Europe.

“We will not close the gates to refugees,” he said. “The European Union has to keep its promises. We are not obliged to look after and feed so many refugees."

Under a 6 billion euro deal in 2016, Turkey agreed to stem the tide of refugees to Europe in return for financial aid after more than a million people entered Europe in 2015. It has since accused the EU of failing to honor the agreement. Erdogan has frequently threatened to “open the gates” and allow refugees and migrants to head to Europe unless more international support was provided.

Your Tuesday Briefing: A Bombing in Pakistan