Tulane University officials say they banished the campus “Victory Bell” to storage after learning of its history "as an instrument of slavery."

The bell was rung to celebrate Tulane victories on the basketball court and football field. Students would also rub it for good luck.

It was removed from its pedestal near the center of campus Thursday, according to a report.

"It is terribly disheartening to learn that it is, in fact, a vestige of a horrific part of our nation's past," Tulane President Mike Fitts and Board Chairman Doug Hertz told students in a letter, the New Orleans Times-Picayune reported. "Now that we understand its history as an instrument of slavery, continuing to use this bell in a celebratory manner would run counter to our values." 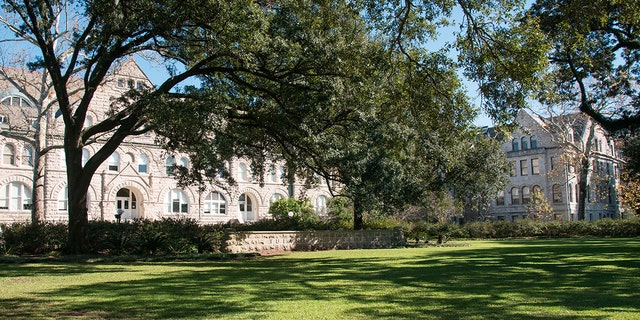 Fitts and Hertz said they were informed last week the bell was originally used to direct the movements of enslaved people on a plantation, according to the paper.

A special committee will submit recommendations for a replacement.

"As an academic institution, we believe it is important to find a way to use this bell to further our knowledge and understanding of slavery and pursue a more just society," the pair said in the letter, the paper reported.

According to the Times-Picayune, the bell was cast in 1825 and donated by Richard Leche, a former Louisiana governor and Tulane law school graduate who was a close ally of former Gov. Huey P. Long. Leche resigned from office and served time in federal prison for corruption before being pardoned by President Harry Truman.

The bell arrived on Tulane's campus in 1960 and stood in front of Fogelman Arena. There it stood for decades and was rung after Tulane basketball victories until the tradition "fell into disuse," the paper reported. In 2011, the bell was refurbished, moved to the front of McAlister and dedicated to Tulane fan Robert "Bobby" J. Boudreau.

Fitts and Hertz said it is important for universities to be vigilant in examining their beliefs and practices.

"Although we have made real progress in building a university that better reflects our community and our highest values, the bell’s newly-discovered past is a powerful reminder that the most tragic and painful elements of our nation's history continue to echo through our communities," the statement said.

Pope at Angelus: ‘never engage in dialogue with the devil’

Delhi Teen Shot At During Clashes Recounts Horror Of Violence

Delhi Teen Shot At During Clashes Recounts Horror Of Violence