“You’re going to have to spray,” Trump said, according to Reuters. “If you don’t spray you’re not going to get rid of (the coca), so you have to spray with regard to the drugs in Colombia.”

Aerial spraying of the crops was suspended in 2015 after the World Health Organization said that the herbicide glyphosate could cause cancer and pollute land.

The U.S., the main destination for the drug, has been pressuring Colombia to crack down on cocaine production since 2017 when the area taken up by coca plantations hit its highest ever recorded, 422,000 acres (171,000 hectares). The U.S. is the world’s largest consumer of the drug. 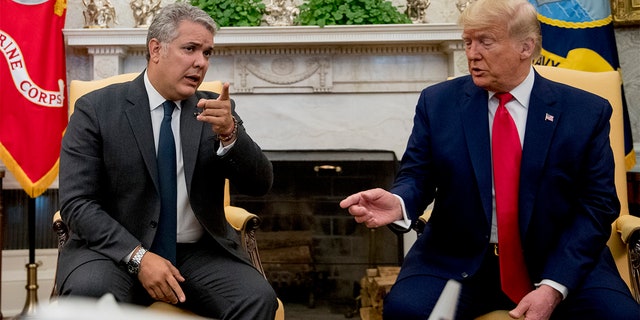 Duque said that the country would "combine all the options available" to continue to tackle the problem, and referred to a manual eradication campaign in 2019 which led to the destruction of around 100,000 hectares of coca.

Duque’s government is working to meet health and environmental requirements of the Constitutional Court before it can restart aerial fumigation. The country has fought for years to tackle the drug’s production, with the U.S. providing about $400 million annually to combat producers and traffickers.

Drug trafficking has long financed the country's internal armed conflicts. An offshoot of the former Revolutionary Armed Forces of Colombia (FARC) guerrillas — the National Liberation Army (ELN)– and other criminal groups make money from the trade, according to security sources.

‘Springsteen on Broadway’ is coming back, but not for guests who can’t prove F.D.A.-approved vaccinations.

After testing positive, the golfer Jon Rahm will return to play at the U.S. Open.