KASTANIES, Greece– Thousands of migrants were trying to find a way across Turkey's western border with Greece Monday, with only dozens managing to pass through either border fences or fording rivers, after Turkey opened its side of the frontier to migrants and refugees to leave the country for Europe.

Turkey declared its borders open to pressure the European Union into helping it handle the fallout from the war in neighboring Syria. Thousands of Turkish troops are supporting the last rebel forces holed up there in the northwestern province of Idlib against the onslaught of Russian-backed Syrian government forces. 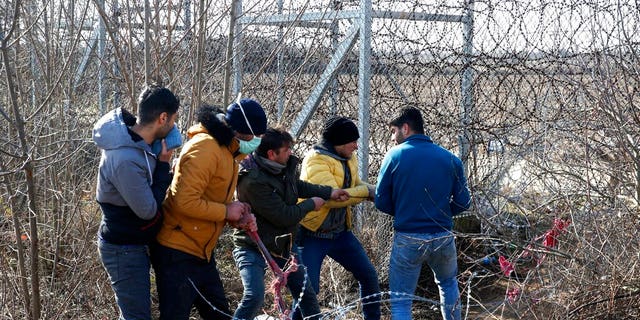 Migrants try to cut the fence at the Turkish-Greek border near the Pazarkule border gate in Edirne, Turkey on Monday, March 2, 2020. (AP Photo/Darko Bandic)

The offensive into the last Syrian rebel areas has driven almost one million civilians to flee toward the sealed border with Turkey, threatening that country which hosts already 3.5 million Syrian refugees with a new and dramatic influx of displaced people.

Thousands of migrants have massed at the Turkish-Greek border since the border opening, and hundreds more crossed from the Turkish coast to nearby Greek islands in dinghies over the weekend.

Greek authorities said that in the 24 hours from 6a.m. local time Sunday, they thwarted 9,877 attempts to cross the northeastern land border, either through the river or through the border fence. Authorities arrested 68 people and charged them with illegal entry into the country.

Therose Ngonda, a 40-year-old woman from Cameroon, made it into Greece by wading across the Evros river that runs along the two countries' border.

Speaking in the morning, her feet still wet from the river crossing, she said she had been told migrants had 72 hours from Friday to leave the country. She got on one of dozens of buses and minibuses that have been ferrying people from Istanbul to the border, among about 2,000 people, including families with young children and Syrians.

Ngonda said she was put into the river on the Turkish side of the border. "They told me `go that way'."

Greece says it is faced with what has all the markings of an organized campaign by Ankara to push people through its borders. The government has sent Greek army and police reinforcements to its northwestern land border with Turkey, saying it was suspending all asylum applications for a month, and would return those entering the country illegally without registering them.

The army announced a 24-hour live fire exercise along the Greek border for Monday, declaring the area dangerous and banning any movement of people or livestock during the exercise.

Police said migrants were concentrated at 10 parts of the border Monday morning, after a relatively quiet night. Over the weekend, Greek authorities used tear gas, water cannon and stun grenades to push back efforts by the crowd to push through the border. They also said Turkey had fired tear gas onto the Greek border.

Afghan university student Karimi Khalmahammad, 22, also managed to make it across the frontier. He said he had spent time inside a Taliban prison in Afghanistan, and now hoped to make it to Germany.

But many of the new arrivals were being picked up by Greek authorities shortly after they crossed the border, and were being driven away in white vans.

Greek islands near the Turkish coast also saw a major increase in arrivals from Turkey. The coast guard said that in the 24 hours until Monday morning, 977 people had reached the islands in dinghies, most of them on Lesbos but also on Chios, Samos and some of the smaller islands.

On Lesbos, local anger at the migration situation boiled over, with some residents preventing people, including young children and babies, from disembarking from a dinghy that reached a small harbor. Elsewhere on the island, they prevented buses from taking new arrivals to Lesbos' massively overcrowded migrant camp of Moria. The new arrivals spent the night on the beach.

Turkey's communications director, Fahrettin Altun, said Sunday the fighting in Idlib was directly linked to Turkey's decision to open the gates for refugees to Europe. He said Ankara had changed its focus to preparing for the possibility of new arrivals from Syria "instead of preventing refugees who intend to migrate to Europe."

“NRC Will Have No Implications For Bangladesh, Its People,” Says India

"NRC Will Have No Implications For Bangladesh, Its People," Says India