The Sun Belt Conference holds an annual women’s basketball tournament, with the winner getting an automatic bid to the NCAA Women’s Basketball Tournament.

The tournament was first held in 1983. 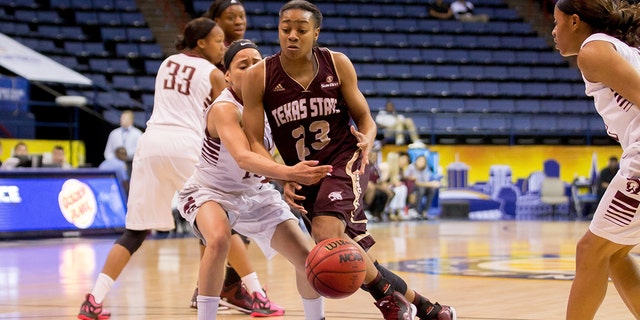 Texas State guard Taeler Deer was MVP of the tournament in a losing effort in 2018. (Photo by Stephen Lew/Icon Sportswire/Corbis/Icon Sportswire via Getty Images)

Western Kentucky was back on top of the Sun Belt in 2014, defeating Arkansas State 61-60.

In 2004, Middle Tennessee State started its own run through the Sun Belt. They defeated Western Kentucky, 79-57. Patrice Holmes won a second MVP award.

Louisiana Tech turned around and won the conference in 1994. They defeated Western Kentucky 68-43. Debra Williams won the tournament MVP award.

Old Dominion picked up conference title No. 4 in 1987 with a 64-61 win over South Alabama. Adrienne Goodson won the MVP award.

In 1986, Western Kentucky got its revenge on Old Dominion. The Hilltoppers won the title game, 69-61. Lillie Mason was named tournament MVP.