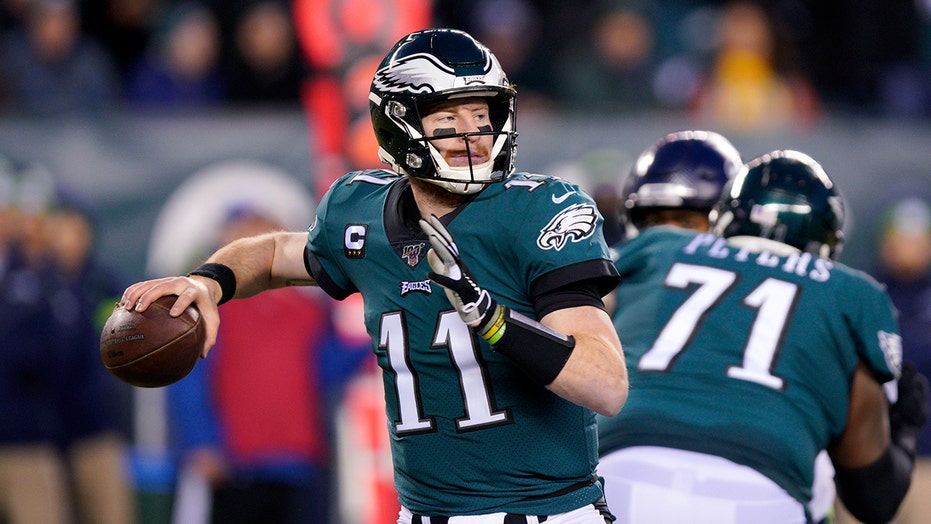 Injuries forced Carson Wentz to watch another quarterback lead the Philadelphia Eagles to their first Super Bowl title and put him on the sideline for playoff games in each of the next two seasons.

Now the franchise player with the big contract saw his team use a second-round pick on a quarterback who was runner-up for the Heisman Trophy last year.

The Eagles didn’t draft Jalen Hurts to compete with Wentz, only to provide insurance. That hasn’t stopped some media and fans from creating a quarterback controversy and interpreting the pick as a slight against Wentz.

Constant scrutiny and intense criticism are part of the job for NFL quarterbacks. In Philly, it’s loud and consistent.

But Wentz blocks it out. He doesn’t break. He won’t allow disappointment, frustration or setbacks to bring him down. Nor does he let success — he finished third in NFL MVP voting in 2017 and signed a contract extension with $108 million guaranteed last summer — inflate his ego.

The reason is his strong Christian faith.

“It can be easy to get consumed with your worldly, fleshly train of thought or desires or whatever,” Wentz explained in a wide-ranging interview with The Associated Press this week. “But when you look at everything from an internal perspective, from a Biblical perspective, and just know that this is so much bigger than just me and my life or where I’m at in my career, football, it’s so much bigger.

“It’s God’s perfect plan. It’s his sovereignty interwoven with every one of our lives. And so for me to just fully trust, fully surrender (and say): ‘All right, God, I’m just here for surrender to you. And I want to give everything I can in my life to ultimately glorify you as best I can.’ It just gives me a different perspective with everything that comes my way, the good, the bad, the ugly. It’s not always the easiest to kind of have that train of thought. But the Bible talks about having a renewed mind. And so for me, that’s a daily thing to have my mind renewed by the Word and just fully surrender to the Lord.”

Wentz plans to embrace Hurts the same way he did Nick Foles, who became a Philly hero after earning Super Bowl MVP honors when he led the Eagles over the Patriots in February 2018. Foles and Wentz were close during the two seasons they played together. They share the same faith, went to the same church along with third-string quarterback Nate Sudfeld and spent plenty of time together. Hurts has similar religious beliefs.

“I believe wholeheartedly that we’re going to hit it off and we’ll be stronger together for the good of the team,” Wentz said of Hurts, who threw for 3,851 yards and 32 touchdowns at Oklahoma in 2019. “It just seems like you instantly connect and you instantly know that person on a deeper level because of the mutual relationship that you share with Christ.”

The Eagles won the NFC East title last season despite numerous injuries on offense because Wentz was excellent down the stretch. He led to them to four straight wins in December while throwing to a group of wide receivers who were off the practice squad and waiver wire. Wentz set a franchise record with 4,039 yards passing and became the first quarterack in NFL history to throw 20 or more touchdowns and seven or fewer interceptions in three straight seasons.

But in the first quarter of his first career playoff game, Wentz was knocked out with a concussion when Jadeveon Clowney hit him in the helmet from behind as he was already going down.

Clowney currently is a free agent and the Eagles have inquired about him. Wentz said he would have no problem welcoming him in the locker room.

“I have the utmost confidence in (management’s) ability to make the team as good as they can to put us in the best situation to win games,” Wentz said.

Wentz became a first-time dad last month, and he was busy last week with his AO1 Foundation’s “day of relief” that replaced his annual charity softball game, which was canceled because of the coronavirus pandemic. The foundation raised $137,534 during its 24-hour virtual fundraising campaign Friday to help families and essential workers in the Philadelphia area through its “Love From The Crumb” initiative.

“My faith is the No. 1 reason why I want to give back,” Wentz said. “To have this position of influence that the NFL gives us, to use it for good and to give back and to influence and inspire others to give back, I believe that’s what God put me on this Earth for.”