Scientists say there are 2 major strains of coronavirus

What does this mean for combating the disease? Fox News medical contributor Dr. Marc Siegel weighs in.

A part-time employee who worked at CenturyLink Field during a February XFL game in Seattle has tested positive for the coronavirus, as the state announced 31 new cases on Thursday.

The employee has yet to be identified and worked as a concession worker at the stadium, according to the Seattle Times.

State officials said the infection risk is low for the 22,060 people that attended the game between the Seattle Dragons and the Dallas Renegades on Feb. 22.

"County officials advise that no extra precautions are required for those who attended the Feb. 22 game or who will attend upcoming events, but all King County residents should know that the risk for infection with COVID-19 is increasing in our community, should be aware of their symptoms, and call their health care provider if they develop a cough, fever, or other respiratory problems," King County officials said in a statement.

Seattle's professional sports organizations will continue to house their scheduled events, as health officials recommend those at higher risk for the illness [over 60, chronic health condition, weakened immune system, pregnant] stay home and "away form larger groups of people as much as possible."

The other teams that play in the area include the Seattle Sounders FC, Seattle Mariners, and the Seattle Seahawks — whose first preseason game is in August. 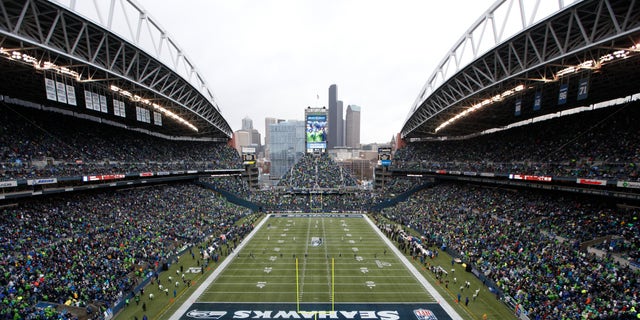 Fans at CenturyLink Field watch during the first quarter of an NFC divisional playoff NFL football game between the Seattle Seahawks and the New Orleans Saints in Seattle in 2014.<br data-cke-eol="1"> (AP Photo/John Froschauer)

"The teams are in touch with local health officials and their respective leagues on a regular basis, as this public health issue continues to evolve," the statement said.

Dave Pearson, a First and Goal spokesman, told the paper on Thursday that the worker "did not show symptoms at the time and has not been at the stadium since."

The XFL said it established a coronavirus task force and is closely monitoring the issue.

“The health and safety of the extended XFL family — especially our fans in Seattle — is of the utmost importance," said Jeffrey Pollack, XFL President. "We share everyone’s concern about this public health issue and understand it is evolving on a daily basis.”

Health officials are reportedly working closely at the stadium to "provide a safe matchday experience."

"Stadium efforts include expanded sanitation procedures – encompassing enhanced cleaning treatments to disinfect all areas of the stadium before and after every event – in addition to increased hand sanitizer stations throughout the venue and continued staff education and training," health officials said.

The next scheduled event at CenturyLink Field is a soccer match between the Sounders FC and Columbus Crew SC on Saturday.

"We are in continuous dialogue with regional health authorities and Major League Soccer, in addition to our network of medical experts. Because of this, we are proceeding with Saturday's match," the team said in a statement.

Washington state is considered the epicenter for the coronavirus outbreak in the U.S. It now has 70 confirmed cases, up from 39 on Wednesday, while 11 people have died from the virus.

Vice President Mike Pence visited the hard-hit state on Thursday after Trump appointed him to oversee the U.S. efforts in containing the virus.

Pence called it "the front line" of the outbreak.