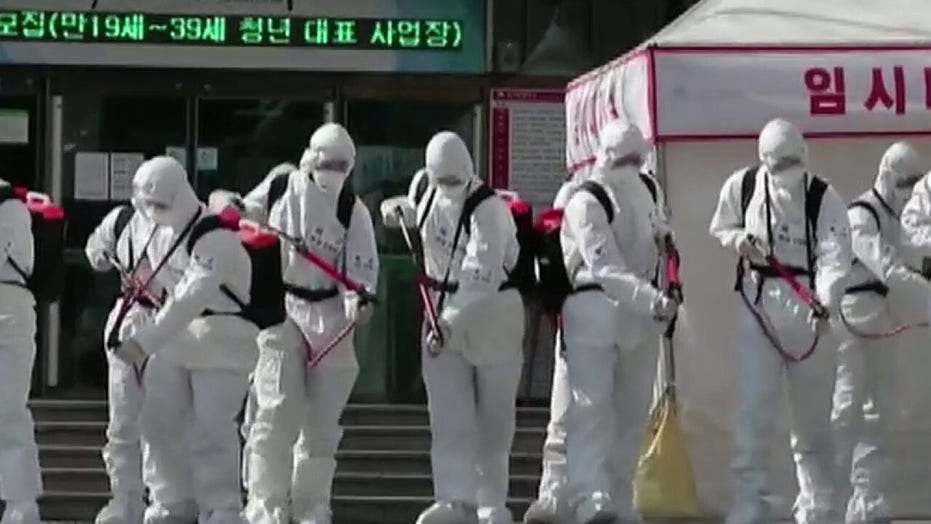 Millions of people headed to the polls in South Korea on Wednesday, making it the highest turnout reported in nearly three decades despite the coronavirus pandemic.

Exit polls showed that South Korean President Moon Jae-in’s ruling party is projected to win the parliamentary elections, which are being closely watched around the world.

In the U.S., the COVID-19 outbreak has caused delays for presidential primary elections and shifted some to mail. At last week's primary in Wisconsin, long lines were seen at overcrowded polling stations after hundreds of poll workers stepped down because of the health risks.

South Korea's National Election Commission said more than 17.2 million people voted Wednesday. Combined with the 11.8 million who cast their ballots during early voting or by mail, the overall turnout was 66.2 percent, the highest since the 71.9 percent turnout in a 1992 general election. 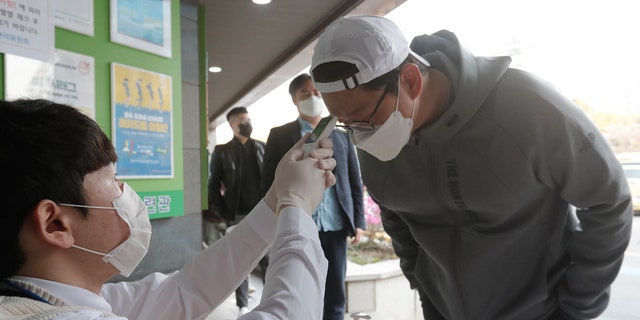 A man wearing a face mask to help protect against the spread of coronavirus has his temperature checked upon his arrival to cast his vote for the parliamentary election at a polling station in Seoul, South Korea, Wednesday. (AP Photo/Ahn Young-joon)

In order to hold the elections as scheduled in South Korea, officials carefully prepared safeguards to reduce the risk of the virus being transmitted.

At polling stations, duct tape or stickers marked 3 feet of social distancing space from nearby streets to ballot booths. 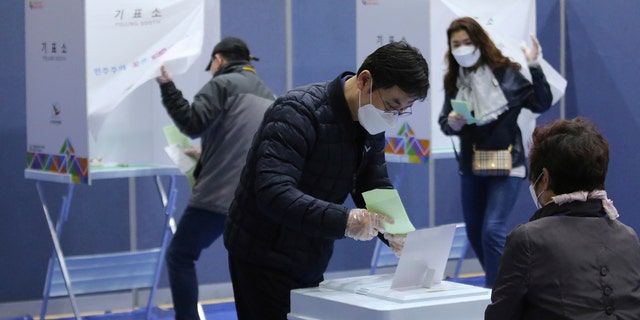 Masked poll workers also checked temperatures of arriving voters and whisked those with a fever or not wearing a mask to separate areas to vote, sanitizing the facilities after each had voted.

Voters who passed the fever screening were given sanitizing gel and disposable plastic gloves before entering the booths.

Choi Sun-hwa, 56, told Reuters she was initially apprehensive about coming out to vote at a polling station in Seoul because of the virus.

“But having come here and seen for myself, I felt it’s good we voted as planned, and people are taking greater precaution about distancing,” she said Wednesday. 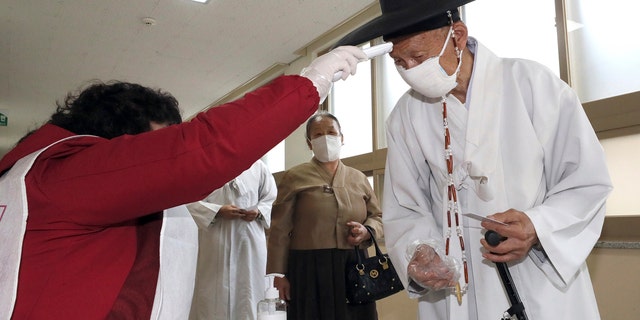 South Korean voters wore masks and moved slowly between lines of tape at polling stations on Wednesday to elect lawmakers in the shadows of the spreading coronavirus. (Kang Jong-min/Newsis via AP)

For those under self-isolation quarantine at their homes, the government texted eligible voters that they were allowed to cast ballots once polling stations closed at 6 p.m. as long as they did not have a fever or respiratory symptoms.

"We believe that personal hygiene and keeping personal distance and hand washing and sanitizing the poll places frequently is very effective — the only effective way to control the person-to-person transmission particularly in closed, small areas," professor Jeon Jae-hyun, a specialist in infectious disease at Ehwa University Hospital in Seoul, told Sky News. 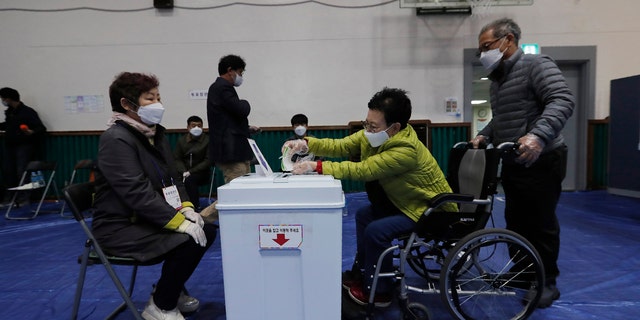 A woman wearing a face mask to help protect against the spread of the new coronavirus casts her vote for the parliamentary election at a polling station in Seoul, South Korea, Wednesday, April 15, 2020. (AP Photo/Ahn Young-joon)

South Korea has so far avoided a full-blown lockdown, but there are concerns over the rising number of cases in cities such as Seoul. Officials have instead implemented an aggressive test-and-quarantine program credited with lowering fatality rates for the coronavirus compared to China, Europe and North America.

As of Wednesday, there were 10,591 cases of COVID-19 in South Korea with at least 225 deaths, according to Johns Hopkins University.