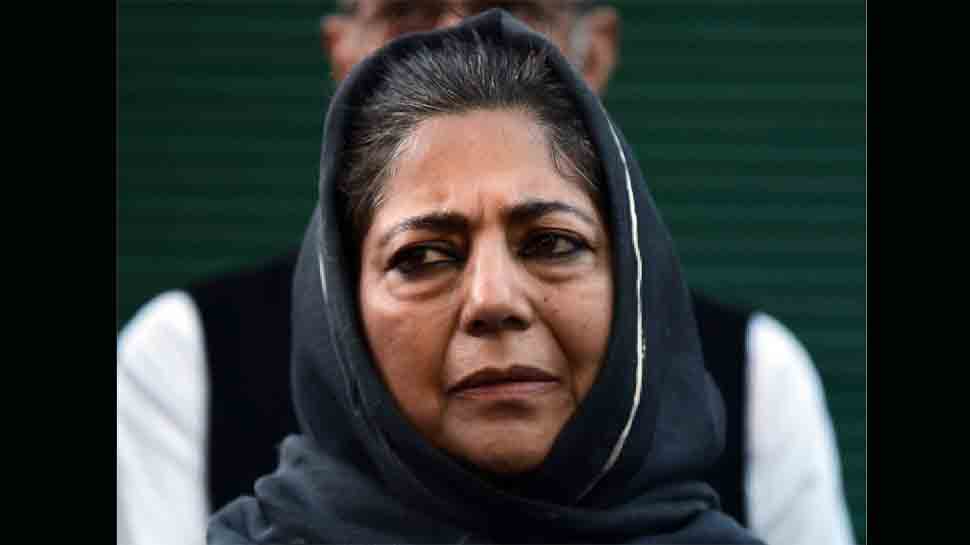 JAMMU: Dozens of Shiv Sena Dogra Front (SSDF) activists on Saturday (October 24) staged a protest here against PDP president Mehbooba Mufti for her remarks that she would only hold the tricolour when the flag of the erstwhile Jammu and Kashmir is restored. On the other hand, the Jammu and Kashmir BJP demanded the arrest of the PDP chief for her 'seditious' remarks.

Led by SSDF's president Ashok Gupta, the protesters holding tricolour in their hands assembled at Rani Park and raised slogans against the former chief minister besides setting ablaze her pictures.

"We will not tolerate anti-national remarks of Kashmiri leaders like Mehbooba and Abdullah (National Conference president Farooq Abdullah). Prime Minister Narendra Modi should open the borders and send them to Pakistan and China as they have no place in India," Gupta told reporters.

The BJP said 'no power on earth' can either hoist the state flag again or restore Article 370 of the Constitution, which granted a special status to the erstwhile state of Jammu and Kashmir.

In her first media interaction after her release from 14-month detention in Srinagar on Friday, the PDP president said she was not interested in contesting elections or holding the national tricolour till the constitutional changes enforced on August 5 last year were rolled back.

In an act seen as defiance, the flag of the erstwhile state of Jammu and Kashmir was prominently placed on a table in front of the PDP president, along with that of her party, during the press conference.

It was for the first time that the PDP displayed the flag of the erstwhile state at a party function or a presser.

"The national flag is our pride and honour and the prestige of our martyrs. We have among us Muslims who are proud of the tricolor,? Gupta said, adding that "we will not allow anyone to hurt our brotherhood". He also demanded the resignation of the National Conference MPs and said "all those who are part of the Gupkar declaration should be sent to Pakistan and China".

Mainstream political parties in Kashmir, including NC and PDP, formed the People's alliance for the Gupkar Declaration this month for restoration of the special status of the erstwhile state as it existed before August 5 last year and also to initiate a dialogue between all stakeholders on the issue.

"We will allow those in Jammu who are Indian by heart and conviction," Gupta said, declaring that the revocation of Article 370 and Article 35 A of the Constitution is permanent.

Far-Right Groups Are Behind Most U.S. Terrorist Attacks, Report Finds

Far-Right Groups Are Behind Most U.S. Terrorist Attacks, Report Finds