Sharjah: Sharjah Municipality officials inspected Abbco Tower – the scene of May 5’s fire in Al Nahda – on Monday to determine the condition of the building and to assess what maintenance needs to be done before residents are allowed back.

The inspection came after the completion of forensic investigations to determine the cause of the fire, which was thought to have started from a discarded cigarette butt or shisha coals thrown from a flat above onto the tenth floor of the 49-floor building, which has nine levels of parking before starting its first level of residential dwellings from the tenth floor.

The fire on May 5 left 12 people mildy injured and in need of treatment, seven of whom were transferred to hospital. But there were no fatalities. 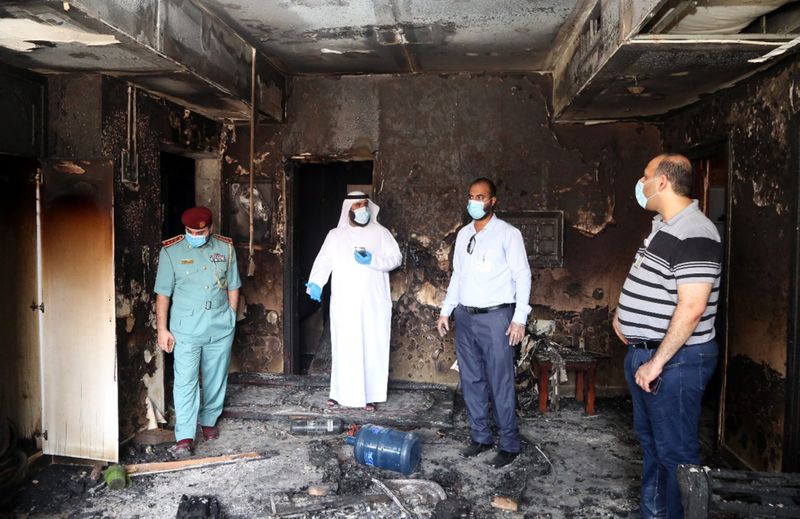 The Municipality visited the site and revised the damage to start procedures for maintenance permit applications. Residents were also allowed to return to undamaged apartments to collect belongings only after officials had verified all protocols were in place to guarantee their safety.

Thabit Salem Al Turaifi, Director-General of Sharjah Municipality, said that the municipality is making continuous efforts with authorities to reach the highest level of safety and fire prevention by strengthening specifications within the building and engineering sector in the emirate.

In addition to this they are providing all means necessary for owners to fulfil maintenance permit criteria to comply with the municipality’s approved requirements and standards.

It had been earlier announced that 150 buildings in Sharjah would now have to change their cladding as a result of this fire.

Cladding used on these buildings was banned for new builds over seven storeys in 2016 but buildings that pre-dated this ruling had kept the banned cladding despite requests from authorities to change. Although not the cause of the fire, the flammable banned cladding did lead to its rapid spread.

Al Turifi explained that the municipality had formed a technical committee to follow up on the progress of Abbco Tower and had visited the site in the presence of representatives from Sharjah Police to examine the damage.

Only one side of the building was damaged in the blaze.

The committee has now begun tests to determine structural integrity of the building and whether it is still safe for occupants.

Khalifa bin Huda Al Suwaidi, Assistant Director General of the Engineering and Building Sector said that the municipality started the necessary cleaning work for the tower, and coordinated with the Sharjah Electricity and Water Authority (SEWA) and Sharjah Civil Defence, to obtain a certificate to operate the building following all tests.

Some concrete parts and cladding were significantly damaged and replacement materials were discussed.

Hassan Al Tfaq, Assistant Director General of the agriculture and environment department at Sharjah Municipality, said the municipality had provided equipment and mechanisms, to withdraw vast quantities of water that had collected inside the tower, during firefighting efforts in order for SEWA to restore the electrical connection.

Blinken to Meet Netanyahu at Turbulent Moment for Israel