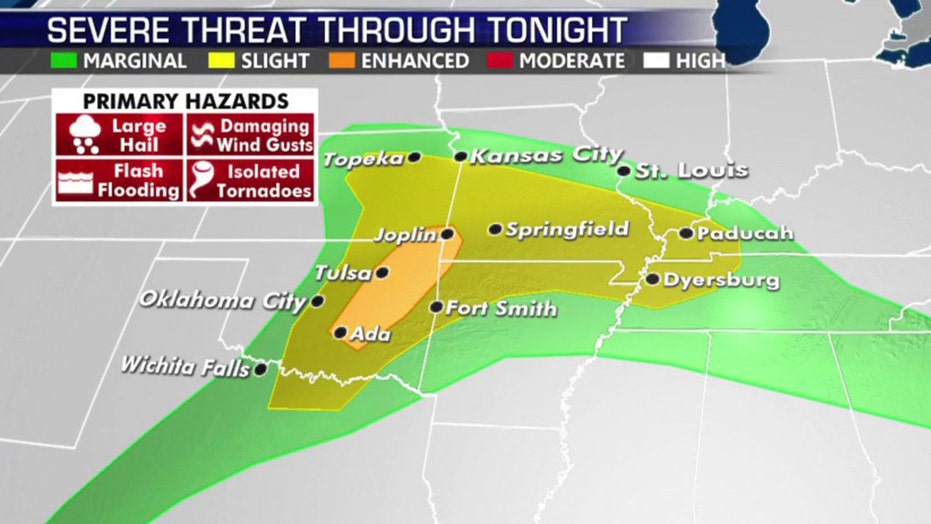 National forecast for Monday, May 4

The threat for severe weather is once again returning on Monday for parts of the country that have dealt with weeks of violent storms.

A system moving out of the Central Plains into the mid-Mississippi River Valley will spread scattered strong thunderstorms across the region from Monday into Monday night.

"We have the potential for another round of strong to severe storms across the Plains States, the Ohio, the Tennessee River Valley later on today," Fox News senior meteorologist Janice Dean said Monday on "Fox & Friends."

Large hail, damaging winds and isolated tornadoes are among the threats on Monday

"I know I sound like a broken record because every week now we've had the potential for strong to severe storms," Dean said on "Fox & Friends." 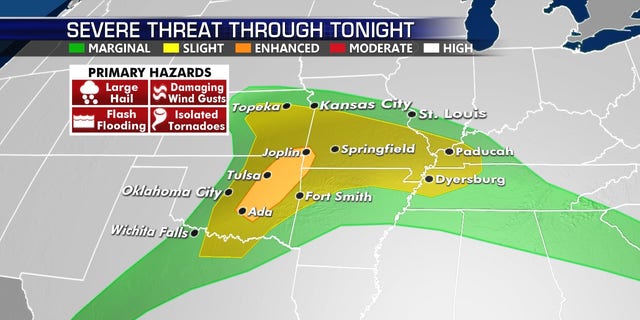 The greatest threat for severe weather on Monday across the central U.S. (Fox News)

The best chance for severe storms on Monday will be from eastern Kansas and Oklahoma to the Tennessee River Valley. 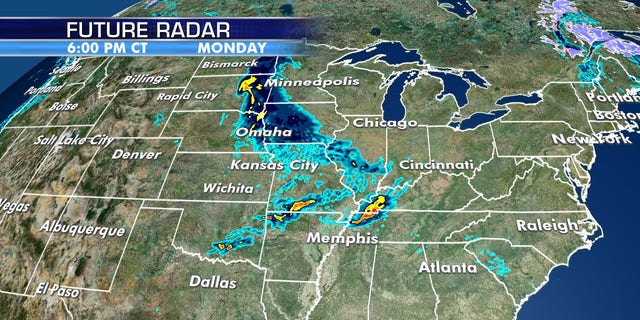 Strong storms are forecast to develop on Monday in another round of potentially violent weather. (Fox News)

According to the National Weather Service's (NWS) Storm Prediction Center (SPC), some 1.6 million people are at an enhanced risk of seeing severe weather on Monday, including in cities such as Tulsa, Okla., and Joplin, Mo.

"Very large hail, in excess of 2-3 inches, may accompany thunderstorms from eastern Oklahoma into southwestern Missouri," the SPC said.

Overall, some 39 million people could see storms on Monday from the Dallas/Fort Worth Metroplex to Oklahoma City into central Missouri and east toward Memphis and Nashville, Tenn.

Heat continues from Southwest to Texas

More hot weather is in store from the Desert Southwest through midweek, with record-high temperatures in some locations. 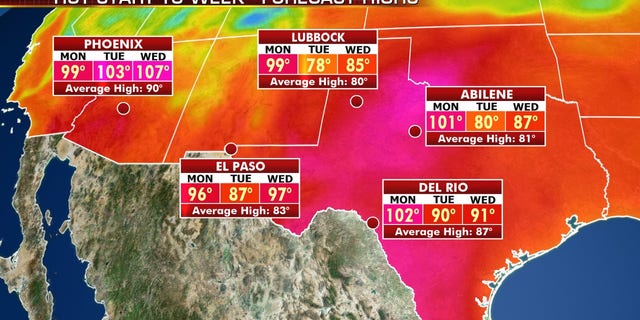 Hot weather is forecast for West Texas into the Southwest on Monday, as more heat is forecast by midweek. (Fox News)

An upper-level ridge is building across the region, allowing temperatures across the Southern Rockies and West Texas to be 20 degrees above average again on Monday.

"We're in kind of almost an autumn-like pattern, as we have this trough across the Northeast and the threat for those strong storms, and with that the cooler temperatures for parts of the northern tier of the country," Dean said Monday.

The Southeast will see summer-like temperatures sticking around through Tuesday before cooler temperatures arrive by mid-week. 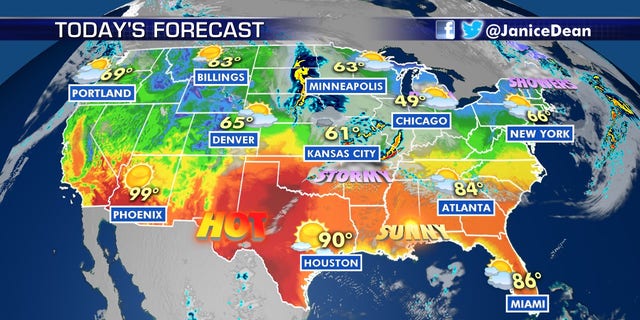 More hot weather is forecast for the Southwest into Texas on Monday. (Fox News)

"As we go through the next couple of days, we're going to see the potential for very hot temperatures across the South and the Southwest, but then very cool over the northern tier of the country, including the Northeast," Dean said.

In the Desert Southwest, temperatures will rise into the 100s by midweek.