Writing a letter to the Chief Minister, Maharashtra BJP MLA Atul Bhatkhalkar sought the attention of the Chief Minister asking him to send the Police Commissioner on leave to end the deadlock in the ongoing probe into the Sushant Singh Rajput death case. 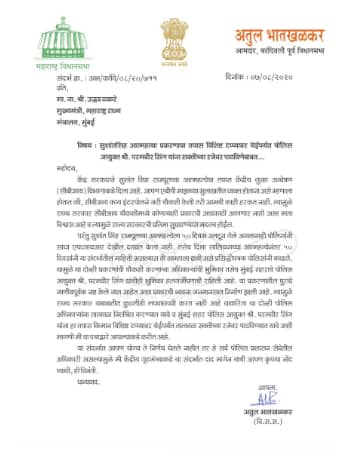 Sushant Singh Rajput, 34, was found hanging from the ceiling of his apartment in suburban Bandra in Mumbai on June 14. Mumbai police has been probing the case and recorded statements of 56 people including Bollywood directors like Aditya Chopra, Mahesh Bhatt and Sanjay Leela Bhansali.

Bihar IPS officer Vinay Tiwari, who was quarantined in Mumbai after his arrival to oversee probe in Sushant Singh Rajput death case, was allowed to return to his home state Bihar.

The Brihanmumbai Municipal Corporation (BMC) today allowed Bihar IPS officer to return to his home state. The Superintendent of Police of Central Patna, Tiwai has been exempted from quarantine protocols.

Tiwari had reached Mumbai on Sunday to oversee an investigation into the FIR filed against actress Rhea Chakraborty in the Sushant death case. Rhea, the girlfriend of Rajput, was booked on abetment to suicide and other charges on a complaint filed by Sushant Singh's father in Patna.

On his arrival in Mumbai, Tiwari was asked to remain in quarantine till August 15 in view of the COVID-19 pandemic and was stamped as quarantined by the BMC.

Meanwhile, the Central Bureau of Investigation (CBI) has registered a case in the matter after the central government accepted the Bihar government`s recommendation for a CBI probe in the matter.

How can a political party enter into an agreement with China, observes Supreme Court on Congress party pact with China`s CPC

More Wealthy Families Are Throwing a Lifeline to Distressed Businesses

More Wealthy Families Are Throwing a Lifeline to Distressed Businesses