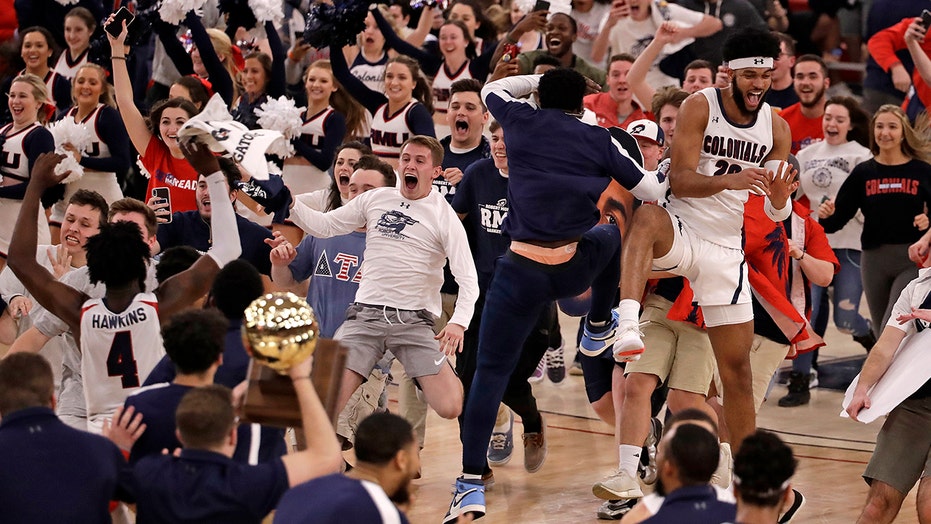 Robert Morris guard Dante Treacy was an unknown entity entering the 2019-20 season, an under the radar sophomore who was just looking to take a small step forward after a rough freshman campaign.

Instead, he took a giant leap – one that landed him and the Colonials right into the NCAA tournament.

With the victory, the Colonials have qualified for the NCAA tournament for the first time since 2015.

"They’re one of the toughest teams I’ve ever coached mentally," said Robert Morris coach Andy Toole. “Guys were locked in each and every day. As the season went on, they raised their level every time they were challenged. … The thing I would say about these guys is it’s as competitive a group from top to bottom as we’ve coached. I think when you have a competitiveness and a toughness that they have, you’re willing to do so much more.”

Treacy, who earned tournament MVP honors, was a key component of that toughness. After missing his first three shots, he finished with 18 points shooting 72% from the field (8 for 11), connecting on two of his four 3-point attempts and dishing five assists.

“I got off to a slow start, but guys just kept telling me to believe in myself,” said Treacy. “Josh (Williams) being the main one. (They) were all just trusting me. That’s what kept me going and locked in.”

“The game honors toughness, and (Treacy) is as tough as they come,” said Toole. “We weren’t talking in the summer about him being a starter and playing 30-plus minutes a game, but because of the way he works and because he’s always willing to do whatever it takes, opportunities and success follows that.

“If you go across our team, he’s a dude who doesn’t blink and doesn’t back down.”

Treacy was one of four Robert Morris players to score in double-figures as the No. 1 seeded Colonials (20-14) extended a nine-point halftime lead to as much as 19 in the second half en route to a convincing win in front of an electric home crowd on Peoples Court at the UPMC Events Center.

Josh Williams ended with 17 points, while AJ Bramah and Yannis Mendy each added 12. The Colonials shot 48% percent as a team, outrebounded Saint Francis 35-30 and tallied 36 points in the paint.

After a fifth-place finish in the conference’s preseason polls, Robert Morris entered the NEC tournament as the No. 1 seed and is now NCAA tournament bound for the second time during Toole’s 10-year tenure as head coach.

“I think we felt disrespected in a sense due to the fact that nobody believed in us” said Williams, who lost a conference championship game as a freshman at Akron. “I’ve been in this situation before. I didn’t want it to happen again. I didn’t want the guys around me to feel what I felt and come up short.”

“They didn’t allow us to get out in transition,” said Saint Francis coach Rob Krimmel. “We’ve played each other three times now in the last two or three weeks. They knew what we were going to run and knew our personnel. I thought it was going to be key to us to get off to a good start, and unfortunately we didn’t.”

When Blackmon, Keith Braxton and Randall Gaskins subbed out of the game with a minute left, the trio of seniors exited the court to a standing ovation from the RMU crowd as a nod to their highly decorated careers.

“Just looking back at all that we’ve been through, the senior class, just to be able to walk out with them one more time was big-time for me,” said Braxton, who tallied a game-high 22 points and nine rebounds. “I’m just proud of everything we were able to accomplish together.”