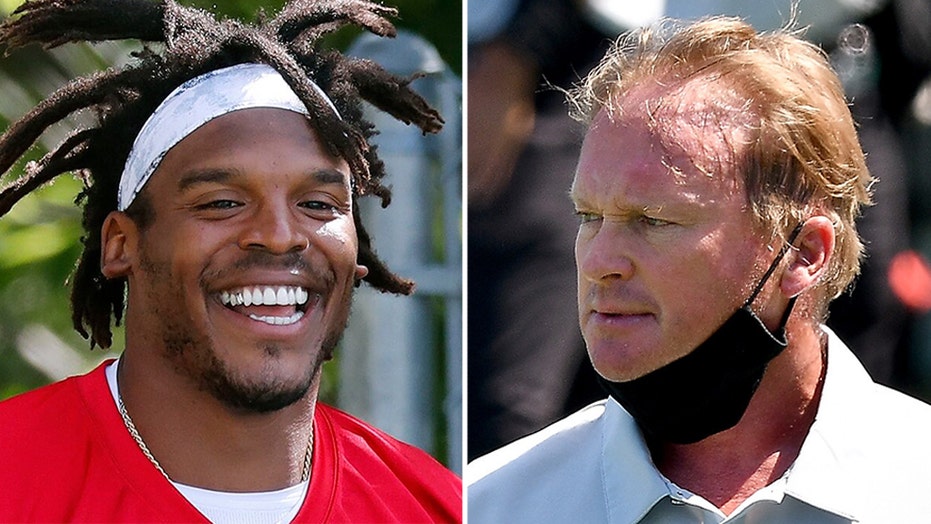 'Instead of a closed first why don’t we have an open hand,' says Herschel Walker reacting to NFL players protesting as the season launches

Ahead of the Raiders’ matchup against the New England Patriots in Week 3, Las Vegas head coach Jon Gruden’s main objective come Sunday will be to bottle quarterback Cam Newton, who already has 122 yards on the ground and four rushing touchdowns in two weeks.

Gruden has given high praise to the former NFL MVP, and he even came up with a nickname for his style of play.

“I haven’t seen many guys walk through my doors that look like Cam,” Gruden said via ESPN. “I call him ‘Slam.’ Slam Newton. That was the nickname He’s a power forward playing quarterback.”

RUSSELL WILSON, SEAHAWKS HANG ON TO DEFEAT PATRIOTS IN NAIL-BITER

Heading into the 2020 NFL season, there were many questions surrounding Newton, who has dealt with significant injuries. The Patriots decided to give the veteran quarterback a chance, and he has impressed early and often.

In New England’s Week 1 win over the Miami Dolphins, Newton completed 15 of 19 passes for 155 yards and had 15 carries for 75 rushing yards and two rushing scores. He followed up that performance with a 397-yard passing total with one touchdown through the air against the Seahawks in Seattle. Newton added 47 rushing yards and two rushing scores on the ground, but the Patriots fell, 35-30, when he was stopped at the 1-yard line on the final play of the game as time expired.

Ryan Lochte feels like he ‘let everyone down’ by missing Olympics