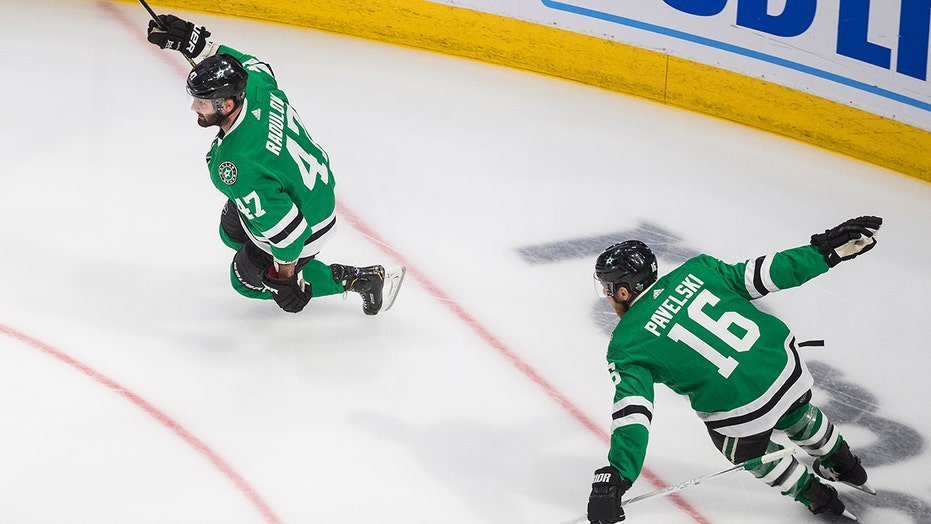 The entire Dallas Stars bench was yelling out to Joe Pavelski about what to do with the puck after a broken play in front of them only seconds into overtime.

Pavelski delivered, with a cross-ice pass to a breaking Alexander Radulov, who scored 31 seconds into overtime on a wrister from the middle of the right circle for a 3-2 victory Thursday night that gave the Stars a 2-1 series lead over the Vegas Golden Knights in the Western Conference final.

“I was flying, no skating, on the other side of the ice, and it was kind of nobody there. (Pavelski) made a good pass, got into the zone, closed my eyes and shot it," said Radulov, later making it clear that he was only joking. "Come on, I didn’t close my eyes … He’s a good goalie and there’s not a lot of room. I was lucky to beat him.”

Radulov's third career overtime goal was his second this postseason, and the only shot in the extra time.

“It’s one of those broken plays that happen in hockey and we moved the puck up quickly, and Pavs made the right read," interim head coach Rick Bowness said. “The whole bench is yelling at him wide, wide."

Anton Khudobin had 38 saves, including 16 in the third after giving up two goals earlier in the period. Vegas goalie Robin Lehner stopped 20 shots overall while his record postseason shutout streak ended.

Dallas was outshot 18-4 in the third period, but had the final chance in regulation with a 3-on-1 break. Stars captain Jamie Benn’s wrister briefly shook up Lehner, who was struck by the puck that went over the pad and hit him near his left knee as time expired.

“I thought in the third we responded again, had a bunch of chances to potentially win the game in the last five minutes,” Vegas coach Pete DeBoer said. “It was one of those nights. They were opportunistic and that’s what they are. Pucks right on the wrong guy’s stick in the wrong spots tonight for us.”

Lehner was back in net for overtime, and said afterward that he was fine. As for the game-ending goal, he said, “It happened pretty quick. … Tough to judge right now.”

Vegas tied the game at 2 with 7:14 left in regulation on Alex Tuch’s goal that was challenged by the Stars, who felt there was interference against Khudobin. The goalie was in front of the right post with Mark Stone against him when Tuch’s shot went over his left shoulder and into the net.

“Nothing I can say about it, I think I was out of the crease. That was it," Khudobin said.

The unsuccessful challenge put the Golden Knights on a power play, during which Khudobin made a pair of sprawling saves, including one when a shot by Tuch ended up under his left leg.

Dallas led 1-0 after Jamie Oleksiak scored on a breakaway with 17 seconds remaining in the second period, starting the offensive charge when he blocked a shot by Stone. Oleksiak took a pass from fellow defenseman Miro Heiskanen and stayed ahead of Alex Martinez before using a forehand, backhand move for the goal.

The puck went off the left leg of Lehner and trickled into the net just inside the right post. That ended Lehner’s shutout streak of more than 171 minutes that had set a postseason franchise record.

Lehner had shutout wins in his previous two games, including the Game 7 winner over Vancouver in the second round, and Game 2 against the Stars two days earlier when he stopped 24 shots. The Golden Knights record had been 144:04 two years ago by Marc-Andre Fluery, still their primary goal until Lehner was acquired in a deadline trade this season.

Vegas got even at 1 on Shea Theodore’s power-play goal early in the third period, a wrister for a long shot through traffic, soon after his one-timer from the top of the left circle got past Khudobin but ricocheted off the far post when the Golden Knights had a 5-on-3 advantage.

“Didn’t capitalize on our chances,” Stone said. “We had four or five good looks in the power play after the tying goal on the challenge. We had opportunities to win the game.”

Benn’s first goal in five games put Dallas up 2-1 with 12:25 left in regulation, on a shot that skirted under the pads and through Lehner’s legs.

After the Knights and Stars became the first teams in the modern era (since 1943-44) to exchange shutouts in the first two games of a conference semifinal of final series, Game 3 was scoreless until the closing seconds of the second period.

The second period started with Lehner’s glove save on Benn’s shot. Esa Lindell’s turnover late in the second period led to a close shot by Stone that was gloved by Khudobin. Right after that, William Karlsson had a breakaway and the puck rolled a bit before he knocked it into Khudobin’s body.

NOTES: Oleksiak’s goal ended a scoreless streak of 157 minutes for the Stars since scoring on their first shot in the series, 2:36 into Game 1 they won 1-0. … Heiskanen has an NHL-high 17 assists this season. … Lehner has the longest shutout streak this postseason, surpassing Thatcher Demko of Vancouver (138:40) and Semyon Varlamov of the New York Islanders (138:17). …

UP NEXT: Game 4 on Saturday night.