Protests erupted in Indianapolis Thursday, a day after police fatally shot two black men and killed a white pregnant woman in three separate incidents, one of which was livestreamed on social media.

Protestors carried signs saying “No justice, no peace," and "police are domestic terrorist[s]." Other signs said "#BlackLivesAlwaysMatter." The gathering took place at the scene of the first of the three deadly shootings, near the City-County Building in downtown Indianapolis.

People donned face masks to protect against the spread of coronavirus. 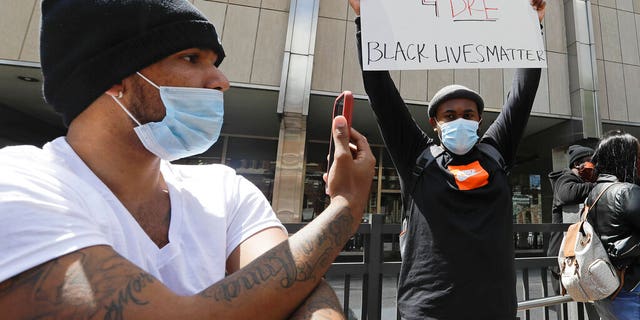 A protester holds a sign outside of the City County Building, Thursday, May 7, 2020, in Indianapolis. The crowd was protesting the fatal shooting Wednesday evening by an Indianapolis Metropolitan Police Officer. (AP Photo/Darron Cummings)

Chief Randal Taylor of the Indianapolis Metropolitan Police Department acknowledged that the “tragic” incidents had shaken the public’s trust, but promised that the department would conduct thorough, transparent investigations into all three deaths.

“We recognize and are saddened that this mutual trust, that we so value, has been eroded over the last 24 hours, but I remain steadfast in our commitment to be transparent with our community, not just today but throughout the entire process as we learn more about what happened last night,” he said during a news conference Thursday.

The first shooting occurred around 6 p.m. on Wednesday, after officers with the Indianapolis Metropolitan Police Department (IMPD) engaged in a high-speed chase with the suspect — later identified as 21-year-old Dreasjon Reed — and both sides exchanged gunfire as Reed livestreamed the ordeal on Facebook.

Later, a male voice can be heard on the video stream saying: “I think it’s going to be a closed casket, homie,” an apparent reference to a closed-casket funeral.

Taylor said Thursday that he was “aware of inappropriate comments made by an IMPD detective that was broadcast live on social media during the incident.” He said “immediate disciplinary action” would be pursued against the detective, who was responding to the shooting and was not present when it happened.

Police eventually spotted Reed pulling into a parking lot, where he got out and started to run, Assistant Chief Chris Bailey said at a news conference following the shooting. The car chase and foot chase were both captured on video, apparently by Reed.

Bailey said there was a confrontation between the officer and Reed, which caused the officer to initially use his Taser.

At one point, after police stopped pursuing him, Reed is heard on video laughing and cheering. “I’m not going to jail today!” he shouts. Moments later, he appears unsure where he has driven and says in the recording, “Please come get me. Please come get me!”

“Shots were fired. It is believed at this time that shots were fired by both the officer and the suspect,” Bailey said. The officer who killed Reed was also black. He has been placed on administrative leave, according to reports by the Indianapolis Star.

Reed died on the scene, while the officer was not injured. Police said a gun was recovered nearby the scene.

On Thursday, authorities said the gun matched the "distinctive appearance" of a gun "Mr. Reed had been seen posing with on social media."

In a separate incident, Officer Jonathon Henderson, a 22-year veteran of the police department, struck a pregnant woman who was walking along an expressway ramp with his vehicle. She was later identified as 23-year-old Ashlynn Lisby. Police said Henderson requested help and rendered first aid to the woman. Lisby was pronounced dead at a hospital and her fetus did not survive.

Shortly after — about eight hours later — police investigating a burglary at an apartment complex where they were met with a man armed with a rifle who shot at the four responding officers as they approached the apartment at about 1:30 a.m. Police said officers returned fire, killing the man, later identified as McHale Rose, 19.

Taylor said the initial investigation suggests that Rose “may have made the call with the intention of initiating an ambush-style attack on the officers when they arrived.” He did not rule out the possibility that Reed's earlier fatal police shooting may have spurred Rose's actions but said there was no evidence to confirm that.

The Greater Indianapolis NAACP said in a statement Thursday that it was monitoring information about both fatal police shootings.

“Our hearts this morning are with the families who lost loved ones during these tragic events. All of us are trying to make a new normal in an un-normal time. Incidents like these do not help restore normalcy to our community,” said Chrystal Ratcliffe, the president of the NAACP branch.

More people are driving despite the lockdown restrictions, says RAC