NBA restarts season in 'the bubble' amid coronavirus concerns

What will the season look like? Sports reporter Jared Max weighs in.

Sports are back and professional athletes have turned to social justice activism during the national anthem to raise awareness on racial injustice and police brutality in the U.S.

The movement started in 2016 when Colin Kaepernick, of the NFL’s San Francisco 49ers, started to kneel during the anthem after talking to former U.S. Green Beret, and former Seattle Seahawks player, Nate Boyer. The decision to kneel started a firestorm across the league and even reached the upper echelon of the White House.

While kneeling during the anthem was primarily centered in the NFL, several athletes followed Kaepernick's path – Megan Rapinoe in the National Women’s Soccer League and Bruce Maxwell in Major League Baseball. Scores of NFL players would also kneel during the anthem in 2017.

But as games were played and championships were won, the fever pitch around kneeling during the national anthem began to taper off – until the summer of 2020.

In the wake of the death of George Floyd – who died in a police-involved incident in late May – players from all professional sports leagues planned protests during the national anthem.

While most players have knelt during the national anthem, there was a handful of them who did not. Those players cited religion or equated kneeling with disrespecting the American flag or the military among other reasons.

Players and coaches who didn’t kneel for the anthem explained their reasoning for the most part.

“I'd prefer to keep that to myself,” Popovich said when asked about his reasoning, according to USA Today.

“Everybody has to make a personal decision. The league's been great about that; everybody has the freedom to react any way they want. For whatever reasons that I have, I reacted the way I wanted to.”

Popovich is a graduate of the U.S. Air Force. 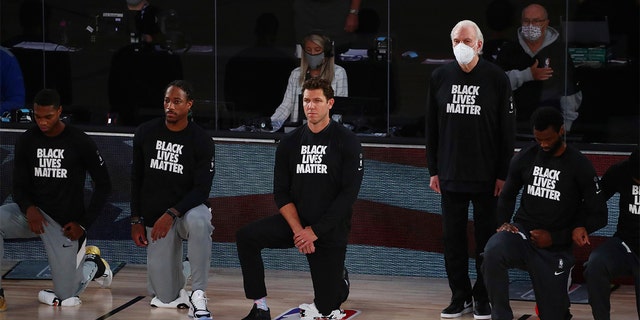 JONATHAN ISAAC, NBA: Jonathan Isaac was the first player to stand for the national anthem in the NBA, which prides itself on being on the frontlines of social justice. Austin stood for the anthem without a Black Lives Matter shirt before his Orlando Magic took on the Brooklyn Nets.

Isaac explained why he didn’t kneel or wear a shirt supporting the movement, according to Bleacher Report.

“I believe that Black Lives Matter. A lot went into my decision, and part of it is, I thought that kneeling or wearing the Black Lives Matter t-shirt doesn't go hand-in-hand with supporting Black lives. So I felt like, just me personally, what is that I believe is taking on a stance that, I do believe that Black lives matter, but I just felt like it was a decision that I had to make, and I didn't feel like putting that shirt on and kneeling went hand in hand with supporting Black lives. I believe that for myself, my life has been supported by gospel, Jesus Christ, and everyone is made in the image of God and that we all forge through God's glory. 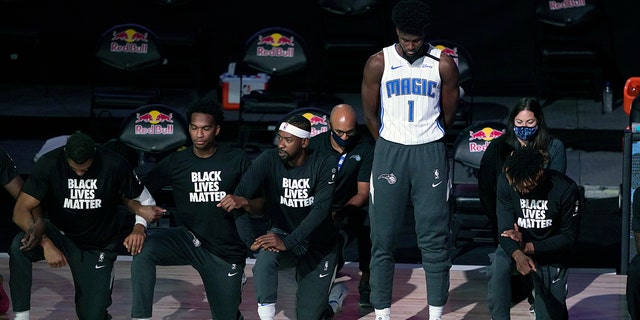 Orlando Magic's Jonathan Isaac (1) stands as others kneel before the start of an NBA basketball game between the Brooklyn Nets and the Orlando Magic Friday, July 31, 2020, in Lake Buena Vista, Fla. (AP Photo/Ashley Landis, Pool)

MEYERS LEONARD, NBA: Meyers Leonard, of the Miami Heat, chose to stand for the national anthem as well during the league’s first games of the restarted season. Leonard said he believes “Black lives matter” but went further in his explanation to reporters after the game.

“Some of the conversations I’ve had over the past three days, quite literally, have been the most difficult,” he said. “I am with the Black Lives Matter movement and I love and support the military and my brother and the people who have fought to defend our rights in this country.

Leonard decried the racial division currently gripping the country and said he finds it troubling that certain people now choose to deal in moral absolutes.

“I am a compassionate human being and I truly love all people,” he explained. “I can’t fully comprehend how our world, literally and figuratively, has turned into Black and white. There’s a line in the sand, so to speak: ‘If you’re not kneeling, you’re not with us.’ And that’s not true."

He added: “I live my life to serve and impact others in a positive way.”

RACHEL HILL, NWSL: Rachel Hill, of the Chicago Red Stars, stood by her teammates Casey Short and Julie Ertz while they embraced while kneeling during the anthem. Hill said she stood for the anthem because of her family’s military history.

“I chose to stand because of what the flag inherently means to my military family members and me, but I 100% percent support my peers. Symbolically, I tried to show this with the placement of my hand on Casey’s shoulder and bowing my head. I struggled, but felt that these actions showed my truth, and in the end I wanted to remain true to myself,” Hill said in a statement posted on Twitter.

“If this wasn’t clear, let my words and further actions be. I support the black lives matter movement wholeheartedly. I also support and will do my part in fighting against the current inequality. As a white athlete, it is way past due for me to be diligently anti-racist.” 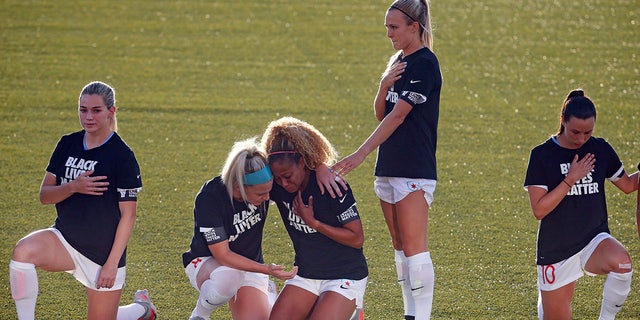 SAMANTHA MURPHY, NWSL: Samantha Murphy, of the North Carolina Courage, also stood for the anthem on the sideline before one of her first matches. Murphy was wearing a Black Lives Matter T-shirt but didn’t explain her reasoning for standing for the anthem. Murphy, also known as Samantha Leshnak, reportedly did take a knee in solidarity with other players while the public address announcer at Zions Bank Stadium read a statement to honor victims of racial injustice.

SAM COONROD, MLB: Players from the New York Yankees and Washington Nationals knelt for their first game and most of the players from the San Francisco Giants and Los Angeles Dodgers – except for Giants pitcher Sam Coonrod. He was the only player to stand ahead of their game.

“I’m a Christian," he said, according to TMZ Sports. “So I just believe that I can’t kneel before anything besides God.”

Aside from his religious beliefs, the 27-year-old relief pitcher said there are aspects of the movement that he disagrees with.

Most members of the San Francisco Giants kneel during a moment of silence prior to an opening day baseball game against the Los Angeles Dodgers, Thursday, July 23, 2020, in Los Angeles. (AP Photo/Mark J. Terrill)

Injured USMNT star Christian Pulisic vows to play in Netherlands match: ‘Will do everything in my power’