Pope Francis suggests people give up trolling for Lent

Pope Francis tested negative for the coronavirus after falling ill last week, according to the Roman newspaper Il Messaggero.

After spending last Wednesday primarily outdoors, Francis came down with a cough, chills and other flu-like symptoms. He was tested for the disease which has spread from China throughout the world, including to Italy, but the results were negative.

The Pope cut back on his schedule while sick, giving up a weeklong retreat but keeping his private meetings, according to Il Messaggero. Even so, with coronavirus fears in Italy — and the fact Pope Francis had never canceled so many public events since assuming the papacy — the Pope's absence from public caused concerned speculation. 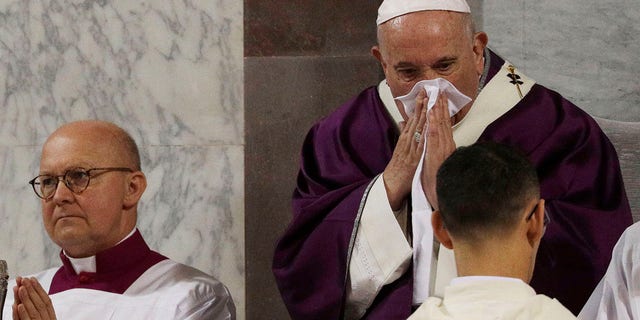 FILE – In this Wednesday, Feb. 26, 2020 file photo Pope Francis wipes his nose during the Ash Wednesday Mass opening Lent, the forty-day period of abstinence and deprivation for Christians before Holy Week and Easter, inside the Basilica of Santa Sabina in Rome. (AP Photo/Gregorio Borgia)

At a White House briefing yesterday, U.S. Vice President Mike Pence told the media that there are 43 total cases of coronavirus in the United States with six total deaths so far, but that the risk to Americans from the disease was still not major.

"Despite today's sad news, let's be clear. The risk to the American people of the coronavirus remains low according to all of the experts we are working with across the government," Pence said.

Markets across the world have tumbled in the past week over fears that the disease could stunt the global economy, but stocks did rebound Monday over hopes that central banks across the world would take action to shield the economy from any negative effects of the coronavirus.

Fox News' Vandana Rambaran and The Associated Press contributed to this report.