Pope encourages French youth to build on the heritage of holiness 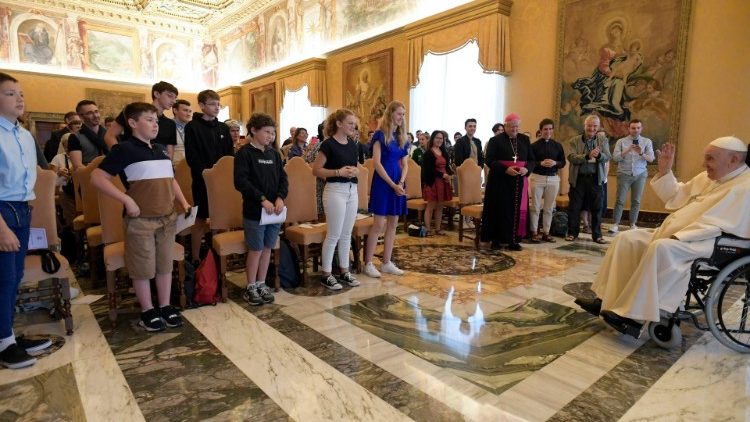 Pope Francis meet with young pilgrims from the French town of Viviers, the hometown of Charles de Foucauld and Marie Rivier who will be canonized on Sunday, and invites young people to build on their heritage of holiness.

Pope Francis welcomed young pilgrims from the Diocese of Viviers, France, in Rome for the canonization on Sunday of Charles de Foucauld, Marie Rivier and Fr. Gabriel Longueville, all three who come from their diocese. The Pope highlighted how the three Blesseds to be declared Saints offer examples the faithful can follow in their own faith journey.

The legacy of the three Blesseds to be proclaimed Saints are Fr. Charles de Foucauld who went to the Sahara and lived among the Tuareg, Sr. Marie Rivier who founded the Congregation of the Sisters of the Presentation of Mary, and Fr. Gabriel Longueville beatified as a martyr in 2019 who was an old acquaintance of Pope Francis before he became Pope during his years in Argentina. The Pope described Fr. Longueville’s self-sacrifice and attention to the poorest in the parish where he worked “a model for the priests of his homeland.” He also added how “this succession of blesseds and future saints clearly shows the fruitfulness” of the Diocese of Viviers, hoping that “this patrimony of holiness” will be preserved and may grow.

Speaking about the figures of Charles de Foucauld and Marie Rivier, the Pope said:

“My wish for you today is to learn from Charles de Foucauld in order to have that experience of God that led him to evangelize by his presence. It is a discreet form of evangelization, but a very demanding one, because it requires the witness of a consistent life, that is, one truly conforming to the aspirations of every person loved by God and called to something other than fleeting pleasures or immediate and visible results.”

Pope Francis then encouraged young people to base their Christian life on the “three E’s, three key-words of Charles de Foucauld’s spirituality: Gospel, Eucharist and Evangelization,” in practice “a life programme in the school of Christ.” He suggested learning and meditating often on the prayer of self-surrender to God, as reflected in his writings,” especially at times of life’s choices and crosses. “In this way you will be able to enter into the evangelical dynamic of the Church in your diocese,” he added, “a diocese that shows the desire to live the universal fraternity of the hermit of the Sahara.” The Pope also mentioned “all the scout groups that have placed themselves under the patronage of Charles de Foucauld.”

Marie Rivier a sign of God’s love for all

Speaking about the witness of Marie Rivier, the Pope praised the congregation she founded, now spread throughout the world, and how it “continues to work tirelessly helping children, young people and the excluded.” Praising the example of Marie Rivier, a daughter of their land dedicated to the education of children with the Congregation of the Sisters of the Presentation of Mary that she founded, the Pope encouraged them to help open the minds of those they serve “to the things of God, to concern for their neighbor and admiration for creation. How important this is! I hope there will still be many women of this stature, humble and courageous in making known God’s love for the little ones who ask only to learn.”

Finally, Pope Francis said he hopes the young people leave Rome “with a greater love for the Church,” explaining that tomorrow’s celebration will give them “an image of its universality and its many faces, all turned to the one Saviour,” and expressing his hopes that the future Saints, Marie Rivier and Charles de Foucauld will always be a source of encouragement and inspiration.

How do we know if we are listening to God’s voice, or our own? This author has some advice

How Blacks and Jews are bound together in ‘great replacement’ theory

The beloved community and the heresy of white replacement