Around the World: Demonstrations turn violent in Chile

Hundreds of protesters clash with police in Santiago

Police in Chile are on the hunt for members of an armed gang who stole around $15 million in cash from the Santiago airport.

The dramatic heist, according to officials, took place at an airport warehouse around 11 am local time on Monday. At least seven men are said to have entered the cargo area and forced security guards to surrender the cash – a shipment of both dollars and euros – at gunpoint. One person was injured in the ordeal.

At a subsequent press conference detailing the incident, authorities underscored that they suspected the bandits had received inside information pertaining to the delivery’s arrival, and that it was the work of professionals. The robbers entered the facility in what appeared to be a DHL delivery vehicle, although police later said it was not a real van but painted to appear so.

The money was intended to be distributed to banks across the country. 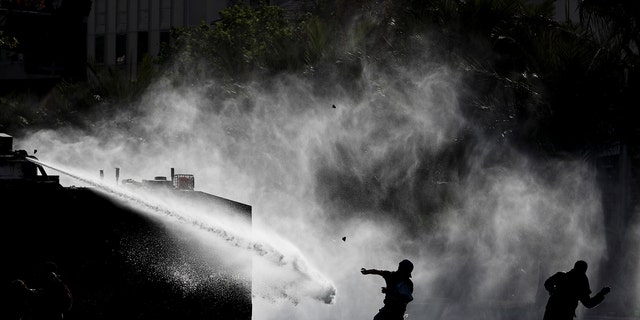 Demonstrators clash with a police water cannon during an anti-government protest in Santiago, Tuesday, Nov. 5, 2019. Chileans have been taking to the streets and clashing with the police to demand better social services and an end to economic inequality, even as the government announced that weeks of demonstrations are hurting the country's economic growth. (AP Photo/Esteban Felix)

The incident comes on the heels of months of unrest in the Latin American country, which has been beleaguered by upset civilians protesting fare hikes and related social inequalities. On Sunday, a march in celebration of International Women’s Day also turned violent, leading to a number of arrests and police confrontations.