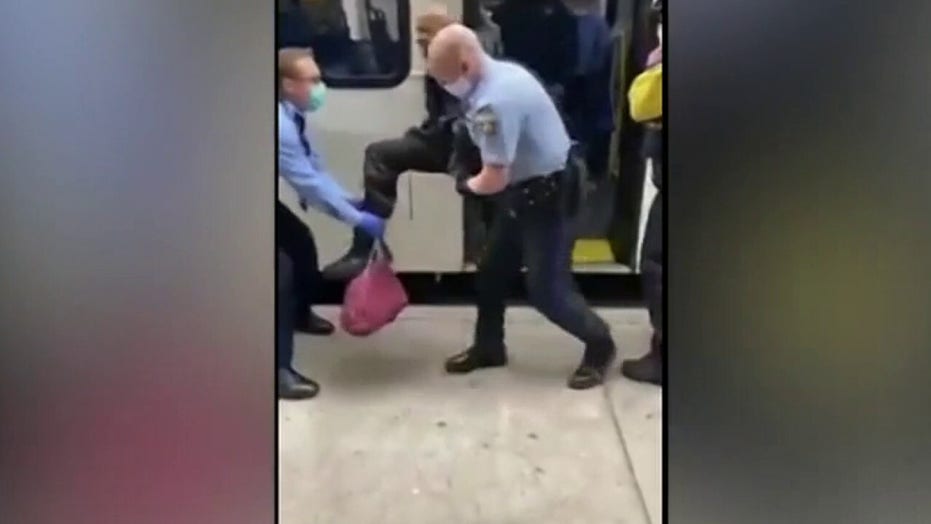 Passenger kicked off bus in Philadelphia for not wearing face covering

A man, not wearing a face mask, was removed from a Philadelphia bus by police officers for reportedly refusing to leave when the driver asked.

A viral video shows police dragging a Philadelphia man off a bus on Friday, seemingly in violation of coronavirus policy at the time.

The video, recorded Friday, shows the man fighting the police as they lift him up and off of the bus. He repeatedly shouts at them before demanding their badge numbers.

The man was not arrested or issued a citation.

Tweets of the video have gained tens of thousands of likes and retweets.

Police initially responded to “calls of a disturbance" after the passenger was repeatedly asked to leave the bus but refused. The man was not wearing a mask, violating the Southeastern Philadelphia Transportation Authority’s (SEPTA's) mandate at the time — which has since been relaxed to "strongly encourage" riders to wear face coverings and gloves, not require it.

Video taken aboard the bus shows a worker asking people to get off for not wearing masks. The worker says, “If you do not have a mask, you cannot ride public transportation.”

One passenger was asked to leave despite wearing a bandana over his face, which the Centers for Disease Control and Prevention (CDC) has suggested is a viable alternative.

The policy, announced Tuesday and effective on Thursday, stated that SEPTA “is now asking all riders to wear masks or other facial coverings, consistent with new CDC guidelines” as part of a "Lifeline Service Schedule."

A SEPTA spokesperson told FOX 29 that the agency does not want its policies to incite conflict or disrupt service.

"I want to be very clear the police were not responding to [a] social distancing complaint," Brian Abernathy, the city's managing director, said during a Friday press briefing. "Police were responding to the fact that the person was asked to leave and refused."

Mayor Jim Kenney, also in attendance at the press briefing, said "that the man was not cited or arrested."

"Let's remember our SEPTA bus drivers are front-line, boots-on-the-ground heroes who go to work every day and feel the need for protection," Kenney said.

The initial mandate was reversed after only one day. SEPTA is now simply “strongly encouraging” passengers wear protective masks and gloves.

As of Friday, Pennsylvania had 19,979 confirmed cases of coronavirus, with Philadelphia accounting for 6,022 of those cases. Approximately 416 people have died from COVID-19 across the state.