High school senior Mayce Wood explains the relief efforts she organized for families who lost their homes in Hurricane Florence that got the attention of the NFL.

The strangest NFL offseason in recent memory included a major milestone for Carolina Panthers running back Christian McCaffrey, the standout playmaker who signed the richest contract for his position in NFL history last April.

A first-team All-Pro selection, McCaffrey signed a four-year, $64 million contract extension with the Panthers. Even after a dominant 2019 campaign in which he became just the third player in league history with 1,000 rushing and 1,000 receiving yards in the same season, McCaffrey said it was a challenge to sit on the opposite side of a negotiating table from team executives.

“It’s never easy to negotiate with the team that you’re passionate about, but I have nothing but respect for [Panthers owner] Mr. Tepper, for [general manager] Marty Hurney, Coach [Matt] Rhule, all these people who played a pivotal role in it, and obviously my agent Joel Segal, who I think is the best in the world, the best that ever did it,” McCaffrey said in an interview with Fox News. “For me, it was a tough process, but it was a smooth process with the circumstance and everything going on.” 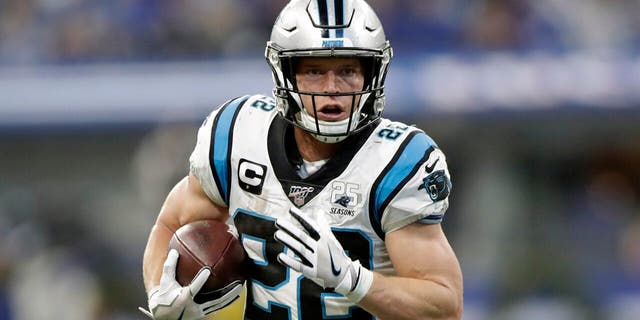 McCaffrey's versatility and superb statistics helped him to a rare double: The Carolina Panthers running back has made The Associated Press NFL All-Pro Team at two positions. (AP Photo/Michael Conroy, File)

McCaffrey, 24, emerged as one of the NFL’s most feared dual threats in 2019, tallying 116 receptions out of the backfield and 19 total touchdowns. The $16 million annual value of his contract extension shattered the NFL record established by Dallas Cowboys running back Ezekiel Elliott, who earns $15 million per year.

McCaffrey acknowledged that his ability to be effective as both a runner and a receiver factored into negotiations at a time when few NFL running backs have succeeded in landing long-term extensions.

“Obviously, my pass-catching ability and my ability to not just be a running back, but to play other positions is important,” McCaffrey said. “I think it adds another value. When you look around the league, you see other running backs who are taking pride in being able to run routes out of the backfield and create mismatches on linebackers. It expands the offense, it makes it easier to call plays, because you can really get creative with the different mismatches you can present on the field.”

McCaffrey’s on-field success has also translated into opportunities off the field. He holds several high-profile endorsement deals, including partnerships with Ascent Protein and apparel brand Flag & Anthem. He also launched a charitable initiative, 22 & You, to raise money for front-line health care workers during the coronavirus pandemic.

With a record contract in hand, McCaffrey said the best advice he’s received is to stay humble and focused on the mentality that originally led him to success.

“I’m priding myself on the stuff that got me here. It’s an honor to be the highest-paid running back of all time,” he said. “It’s something that I don’t take lightly. I look at all the sacrifice and all the hard work I’ve done to get here. It would be a shame for me to stop doing that stuff. For me, nothing really changes, and I think that’s the best advice. Whatever you did to get here, you’ve got to continue to do.”