Officers from the New York Police Department have decried city officials "get cops out of the social distancing enforcement business altogether," following backlash stemming from a violent confrontation with police over the weekend as officers tried to enforce the rules.

Patrick Lynch, the president of the Police Benevolent Association, lambasted city leadership, saying officers have received "nothing but vague guidelines and mixed messages, leaving the cops on the street corners to fend for ourselves."

As the weather heated up in New York City, the police department dispatched 1,000 officers on Saturday to break up large gatherings and enforce social distancing rules intended to protect against the spread of COVID-19.

Officials said over 112 summonses were issued in the city over the weekend for failing to obey social distancing orders and at least three people were arrested.

The arrests occurred in Manhattan’s East Village, where a plainclothes officer handcuffed two people, Shakiem Brunson, 31, and Ashley Serrano, 22, at a deli.

When officers approached a third person, 33-year-old Donni Wright, a confrontation occurred and the officer was caught on camera slapping Wright in the face, punching him in the shoulder and dragging him to a sidewalk after leveling him in a crosswalk.

The exchange was caught on video by a bystander and went viral on social media.

The police response has been juxtaposed with a seemingly milder approach in other neighborhoods across the city, where photos of parks show droves of people less than six feet apart from each other with no masks or gloves on soaking up the sun. 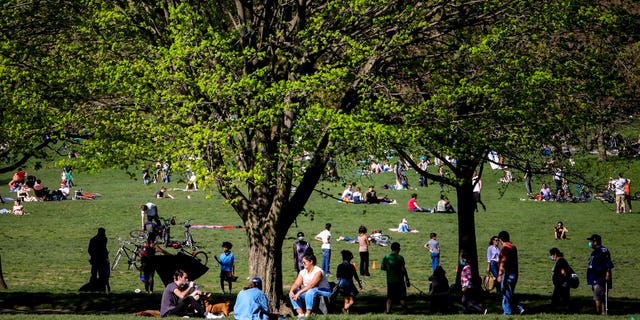 People leave home for the outdoors as the temperature hovered around 70 degrees, even as the stay-at-home order remained in effect with Governor Andrew Cuomo warning that any change in behavior could reignite the spread of coronavirus, Saturday, May 2, 2020, in Brooklyn's Prospect Park in New York. (AP Photo/Bebeto Matthews)

Wright has been charged with assault on a police officer and resisting arrest, but the Manhattan district attorney’s office said it would defer prosecution pending further investigation.

Mayor Bill de Blasio called the incident "unacceptable," and that officer has since been stripped of his gun and badge and placed on desk duty pending an internal investigation. Overall though, the mayor said police in New York have been successfully encouraging the community to abide by rules set in place due to the coronavirus.

"Just the appearance of the NYPD causes people to correct their behavior," de Blasio said during a press conference on Monday.

"This one incident is troubling, but there's been thousands and tens of thousands of interactions between police officers and civilians over the last weeks that went very well where the NYPD went and made sure that people were practicing social distancing when enforcement was necessary."

Still, Lynch said in a statement Monday: “Nobody has a right to interfere with a police action. But now that the inevitable backlash has arrived, they are once again throwing us under the bus."

Tensions between police and de Blasio have been ongoing but officers have taken on an additional and unprecedented role of enforcing measures to protect the public's health.

The mayor announced officers will be a part of an effort to distribute 7.5 million protective masks over the next few weeks.

New York City has been the hardest hit by the coronavirus pandemic in the country with 24,894 people dead and 318,953 others infected. Gov. Andrew Cuomo, D-N.Y., has urged New Yorkers to stay home as much as possible to flatten the curve and hopefully get the state's economy reopened in the upcoming weeks.