State Attorney General Letitia James is calling on the New York Police Department (NYPD) to step up measures to bridge the gap between what seems to be a disparity between social-distancing enforcement of black and Hispanic people as compared to white people.

NYPD: 9 OF10 ARRESTS FOR CORONAVIRUS-RELATED OFFENSES INVOLVED BLACK OR HISPANIC PEOPLE, BUT NOT SOCIAL DISTANCING

“The apparent unequal enforcement of social-distancing policies is deeply troubling, and deepens the divide between law enforcement and the people they are tasked to protect,” James said in a statement Wednesday.

Statistics released by the department just a day earlier showed that more than 90 percent of coronavirus-related arrests made throughout New York City since the lockdown restrictions began in March were of black or Hispanic people.

Police arrested 125 people throughout the five boroughs between March 16 and May 10 — 83 of them were black people and 30 of them were Hispanic people. 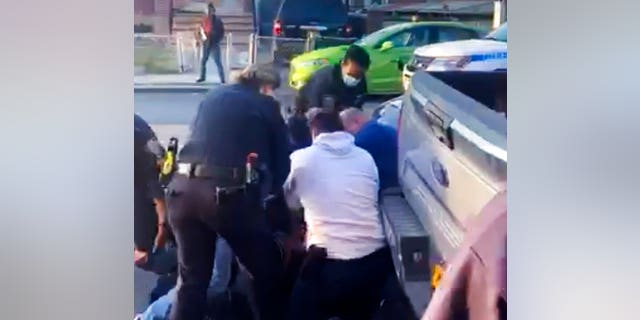 In this April 29, 2020 image made from video provided by Adegoke Atunbi, New York City police officers wrestle a man to the ground while making an arrest in the Brooklyn borough of New York. The video is among those posted on social media recently that show the NYPD using physical force while out enforcing the city's 6-foot-of-distance social distance rule. Despite mounting pressure from watchdogs to stop using police to enforce social distancing, Mayor Bill de Blasio stood by the practice on Thursday, May 7, saying: "We're not going to sideline the NYPD." (Adegoke Atunbi via AP)

James wrote a letter to NYPD Commissioner Dermot Shea on Tuesday requesting enforcement data from the department that includes detailed information about the demographics of people who were arrested or issued summonses, as well as officer training materials.

“It is inherently wrong to aggressively police one group of people, yet ignore another group that commits the same infraction. The NYPD must better ensure that a New Yorker’s race, color and neighborhood does not determine how they are patrolled,” James said.

The NYPD vowed to cooperate with the Attorney General's office in the coming days, as she issued a Friday deadline to produce all the relevant documents and materials she requested.

"The New York Attorney General is the chief law enforcement officer for the state of New York. The NYPD will of course work with her in any way," NYPD spokesperson Sgt. Jessica McRorie told Fox News on Wednesday.

City officials were in an uproar over several incidents where officers may have used excessive force to apprehend black people who police say were violating the city's social-distancing orders.

Social media videos of two separate instances from early May showed police in the East Village slamming a black suspect to the ground for talking back to a cop, and another showed an officer punching a man in the head as he was pinned to the sidewalk.

Meanwhile, videos taken from parks in Brooklyn showed mostly white patrons less than 6 feet apart soaking up the sun with no reported forceful tactics by officers to break up the groups. Instead, police issued summonses and handed out free face masks to prevent the spread of COVID-19.

Many New Yorkers defying coronavirus mask orders, and they say it’s for these reasons