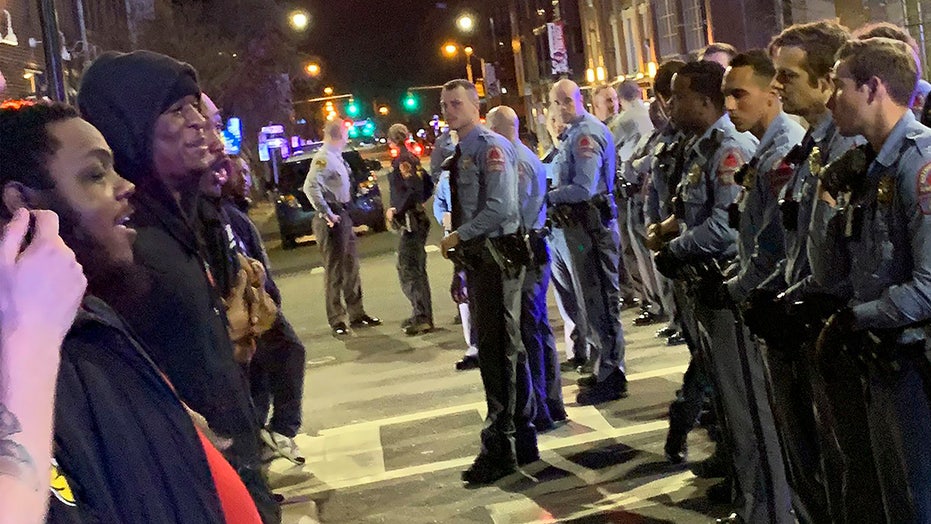 Police in Raleigh, N.C., released body camera footage Wednesday after protesters took to the streets, burning an American flag at the governor’s mansion, in response to a police shooting that left a man injured.

The Raleigh Police Department released video Wednesday afternoon of 26-year-old Javier Torres running toward an officer during a foot chase Tuesday evening with a black object that police identified as a gun. A handgun also was located at the scene of the shooting, police said.

PROTESTS BREAK OUT IN RALEIGH AFTER POLICE-INVOLVED SHOOTING, REPORT SAYS

Torres was shot once in the abdomen by an officer and rushed to a local hospital. His condition was not immediately released. He was charged Wednesday afternoon with altering or removing a gun’s serial number; going armed to the terror of the public; and resist, delay, and obstruct.

“As a result of the reckless and false information that has been spread on social media, a number of spontaneous protests occurred during the night which resulted in minor damage to property in and around the downtown area,” Raleigh Police Chief Cassandra Deck-Brown said in a Wednesday morning press conference. 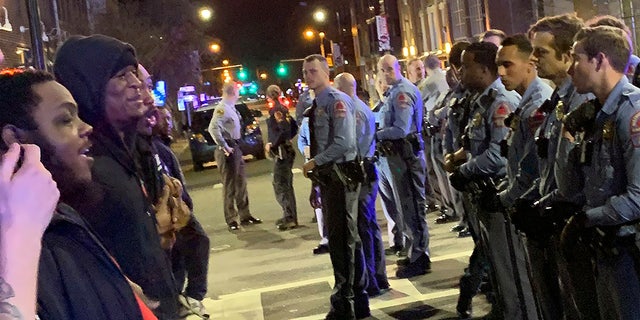 Demonstrators come face to face with police at an intersection during a protest Wednesday, March 11, 2020, in Raleigh, North Carolina. Raleigh Police said in a statement that an officer shot a man after a foot chase on Tuesday. (Courtesy of Kerwin Pittman via AP)

The chief said one rumor rampant on Twitter, which claimed Torres was unarmed and actually only holding a pizza box, was not accurate.

“You will see the individual does have a pizza box, but he also has a gun,” Deck-Brown said, according to the Raleigh News and Observer. “The body-worn camera footage will show that some of those statements were inaccurate.”

Hundreds of protesters gathered in the streets of North Carolina’s capital Tuesday night into Wednesday morning claiming police were slow to release information about the shooting. Some demonstrators arrived at Deck-Brown's home, demanding she come outside. Others removed the American flag hanging outside the governor’s mansion – it was later seen on footage from Raleigh’s WRAL-TV burning in the street.

“Whose streets? Our streets!” demonstrators chanted, as lines of protesters and police faced off.

Deck-Brown’s department didn’t receive approval from a judge to release the footage until Wednesday afternoon. Several video clips were released around 5:30 p.m., the News and Observer reported.

Police responded to a 911 call around 6:45 p.m. Tuesday about a group of men “talking trash” and one of them “flashing” a gun outside a restaurant in eastern Raleigh, the Associated Press reported, citing a recording of the call.

In the body cam video, officers arrive in cruisers and identify Torres based on his description. A black object, which police said was the gun, is seen in his waistband and he holds a pizza in his hand. He takes off on foot, and officers begin to chase him, the video shows.

Another officer approaches from another angle and fires a shot from a few feet away as Torres runs in his direction, the video shows. Police said Torres was holding the gun in his right hand, though the blurry black object is hard to discern in the footage. Officers are seen giving first aid to Torres before an ambulance arrives, the AP reported.