No handshakes in EPL but Klopp fist-pumping again after winclose 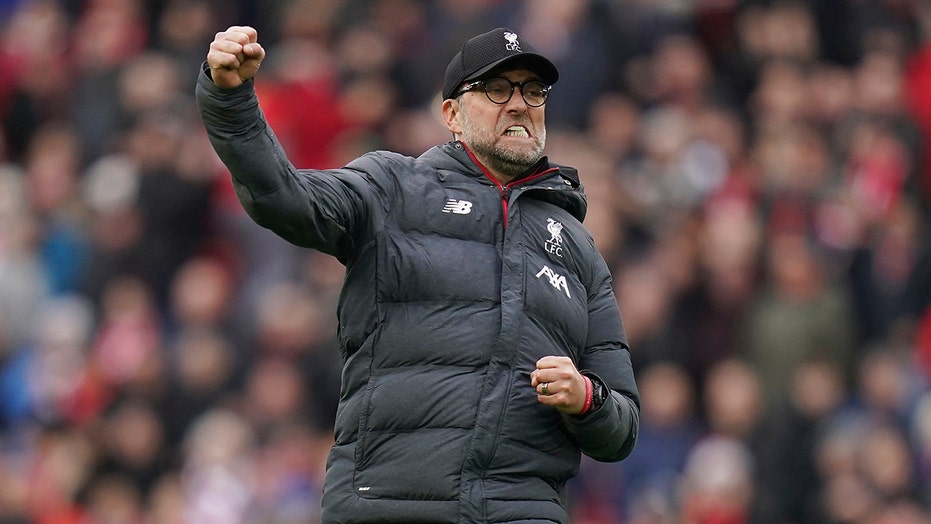 No handshakes were allowed but Anfield saw plenty of fist pumps from Jürgen Klopp.

The trademark celebration was back, and repeatedly, with added gusto. Such exuberance might seem surprising for the manager of a Liverpool side now 25 points in front at the top of the Premier League.

But when the pursuit of an invincible league season was so unexpectedly ended with its first loss, at Watford last Saturday, before being knocked out of the FA Cup by Chelsea, Klopp had good reason to be relieved.

Especially when Liverpool had to come from behind to beat Bournemouth 2-1 on Saturday, with Sadio Mane setting up Mohamed Salah's equalizer before grabbing the winner himself.

Relief, too, that games are still being played — and with fans — as the new coronavirus disrupts sports across the world.

The Premier League continued as planned on Saturday, including Arsenal beating West Ham 1-0 and Tottenham being held 1-1 at Burnley, albeit with a new league edict on reducing body contact coming into effect.

Fears over the spread of the COVID-19 disease, though, led to Liverpool players having to file past their awkwardly static Bournemouth counterparts rather than shaking hands pre-match. In the Anfield stands, a few fans were wearing face masks.

The quicker Liverpool wrap up the title, to end a 30-year drought, the greater the prospect of their fans actually being able to join in the celebrations before they could be shut out of stadiums on government orders.

This victory keeps Liverpool on track to be the earliest winners yet, potentially with six games to spare, by winning at defending champion Manchester City on April 5.

Before then, on Wednesday, there is a Champions League defense to recover after losing the last-16 first leg 1-0 at Atletico Madrid.

“There’s nothing good in losing football games but it makes you aware of how special it is to win football games,” Klopp said. "That’s what we had in the last 10 days or two weeks when we lost games. So you appreciate it much more.

Klopp won't jinx it yet.

The German saw his team concede for a fifth consecutive game after nine minutes when Callum Wilson beat the offside trap to meet Jefferson Lerma's cross.

A defensive lapse gifted Liverpool an equalizer in the 25th.

Mane dispossessed Jack Simpson, who had replaced injured Bournemouth captain Steve Cook, and fed Salah to take his tally to 20 goals for a third consecutive season.

It was Lewis Cook at fault for losing the ball before Virgil van Dijk passed through for Mane to net.

“We didn’t feel consistency in the last two weeks … we consistently lost football games and that’s not nice," Klopp said. “That’s what I love about the boys — that they were really ready to work really hard today and play football. Not only play football, I liked a lot how we really were in the challenges.”

Before playing Everton on Sunday, Chelsea's cushion in fourth place was cut to two points.

Wolverhampton missed a chance to overhaul Chelsea after being held 0-0 by Brighton. But Sheffield United joined Wolves in sitting two points behind Chelsea, after Billy Sharp's header sealed a 1-0 victory over last-place Norwich.

Tottenham is two points further back in eighth, behind Manchester United, after having to retrieve a point at Burnley and avoiding a third straight league loss while Harry Kane and Son Heung-min are injured.

Chris Wood's first-half opener was wiped out by Dele Alli scoring from the penalty spot after Erik Lamela was tripped by Burnley captain Ben Mee.

Alexandre Lacazette proved his value to Arsenal by producing the winner against West Ham after coming off the bench in the second half. It took VAR to overturn an offside call to give the striker his seventh Premier League goal of the season — all coming at the Emirates Stadium.

After three consecutive league wins, Arsenal is now five points behind fourth-place Chelsea in the chase for Champions League qualification.

Newcastle moved above Southampton and eight points clear of danger in 13th place after Allan Saint-Maximin's strike in the 79th minute clinched a 1-0 win over the south-coast club.

Southampton played most of the game with 10 men after Moussa Djenepo was sent off in the 28th minute for a reckless challenge on Isaac Hayden.