No charges to be filed against California man who went shopping in KKK hood: police

No charges to be filed against California man who went shopping in KKK hood: policeclose

The hooded creep was spotted roaming the aisles of a Vons supermarket in Santee on May 2, a day after San Diego residents were required to wear face coverings in public amid the coronavirus pandemic.

“The man expressed frustration with the coronavirus and having people tell him what he can and cannot do,” the San Diego County Sheriff’s Department said in a statement to NBC News.

“He said that wearing the hood was not intended to be a racial statement. In summary, he said, ‘It was a mask and it was stupid.'”

The man’s getup drew outrage on social media and from officials in the city of almost 60,000 residents. 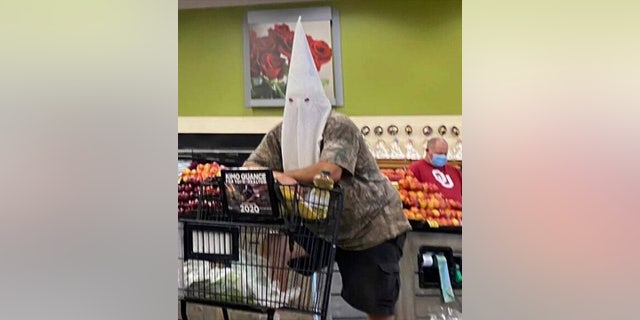 A man was spotted at a California supermarket wearing what appears to be a KKK hood. Courtesy Tiam Tellez

But the US attorney’s office and the San Diego County District Attorney’s Office investigated and didn’t find enough evidence to charge the man, who wasn’t identified by cops.

“This incident should serve as a reminder for anyone contemplating wearing or displaying items so closely associated with hate and human suffering that our society does not hold in high regard those who do so,” the sheriff’s department said in the statement.

“Santee is a city of families, and the community is rightfully disgusted at this man’s despicable behavior,” it added. “The Sheriff’s Department thoroughly investigates incidents such as these and will hold those who violate the law accountable.”
CLICK FOR MORE FROM THE NY POST