No. 6 Maryland rolls past Buckeyes to capture Big Ten crown

No. 6 Maryland rolls past Buckeyes to capture Big Ten crownclose 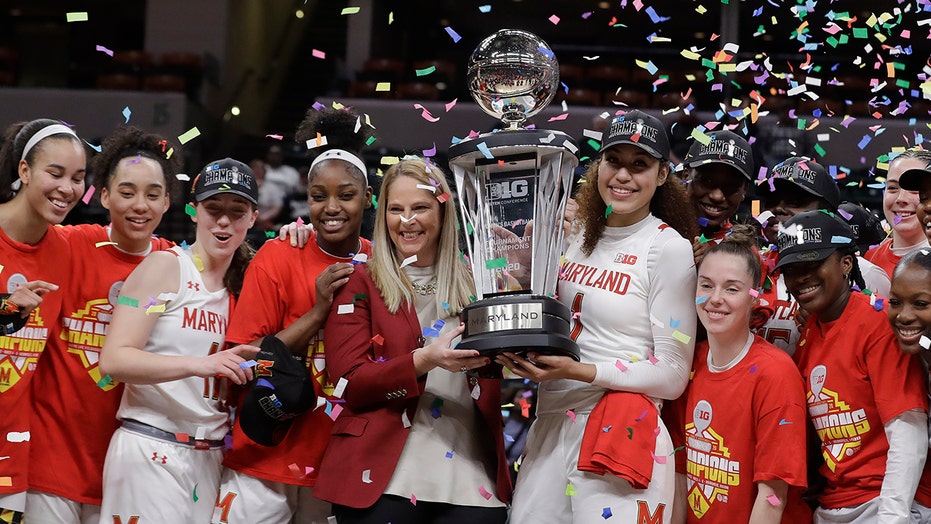 After Sunday, she still hasn't lost in tournament play.

The Big Ten freshman of the year scored 17 points and had 11 assists, leading No. 6 Maryland to its first conference tournament title in three years with an 82-65 victory over Ohio State.

“All she does is win," coach Brenda Frese said.

This was not just another win — following two straight runner-up finishes for the Terrapins (28-4) in Indianapolis.

Now, the Big Ten's regular-season co-champs head into the NCAA Tournament with the league's automatic bid, 17 consecutive wins, home games in the first two rounds and one of the most poised freshmen in the country.

Owusu had 44 points, 24 assists and 17 rebounds over the last three days and added the tourney's Most Outstanding Player award to her already expansive trophy case. Stephanie Jones had 18 points and 10 rebounds against the Buckeyes (21-12) and was the only other Maryland player named to the all-tournament team on the same day the Terrapins clinched a share of the Big Ten's regular-season title in men's basketball.

Jones knew why things turned out different this time.

“She's like, really, a silent assassin in what she's able to do on the court. It's just amazing," Jones said, referring to Owusu. “She can create shots for herself and the defense can never take a break when she's on the court."

Ohio State found out the hard way — for the third time this season.

When the Buckeyes went cold late in the first half, Owusu and Jones scored all of the points in a 9-2 run that helped Maryland take control with a 44-35 halftime lead.

And when Ohio State's drought continued early in the third quarter, Owusu continued masterfully maneuvering her way around defenders and finding open teammates during a 12-4 spurt. When it ended, with 5:02 left in the third, the Terrapins led 56-36 and the sixth-seeded Buckeyes never recovered.

Dorka Juhasz led the Buckeyes with 20 points and Kierstan Bell had 13.

“I think we really showed what we were capable of as we continue through this year and into next year," Buckeyes coach Kevin McGuff said.

But Owusu isn't thinking that far ahead as she chases yet another championship.

“That would mean everything to me," she said. “Coming out and winning a national championship would be awesome.”

Ohio State: Just when it appeared this weekend might be a chalk tournament, the Buckeyes stunned No. 19 Iowa before beating rival Michigan to reach the title game. Yes, they are young. But they showed Sunday that they are fast, tough and the future is bright in Columbus — perhaps even as soon as this postseason. … Juhasz, Ali Patberg of Indiana and Naz Hillman of Michigan rounded out the all-tournament team.

Maryland: Do the Terrapins deserve a No. 1 seed? They earned a share of the second-toughest conference's regular-season title and rolled through the league tournament with three straight double-digit victories. They haven't lost since since Jan. 9 and have a potent offense and a suffocating defense. All they can do is see if the selection committee agrees.

Ohio State: “Probably not a lot of people were talking about us doing much in this tournament, so I think they used that as motivation," McGuff said.

Maryland: “This is incredibly special because when you have a couple of years where the confetti is not falling on you, it show how difficult it is to win it,” Frese said after capturing her fourth tourney crown in the six years the Terrapins have been a Big Ten member.

Ohio State: Must wait until next Monday to find out its postseason fate.

Maryland: Also will be in a holding pattern until the NCAA Tournament bracket is released.