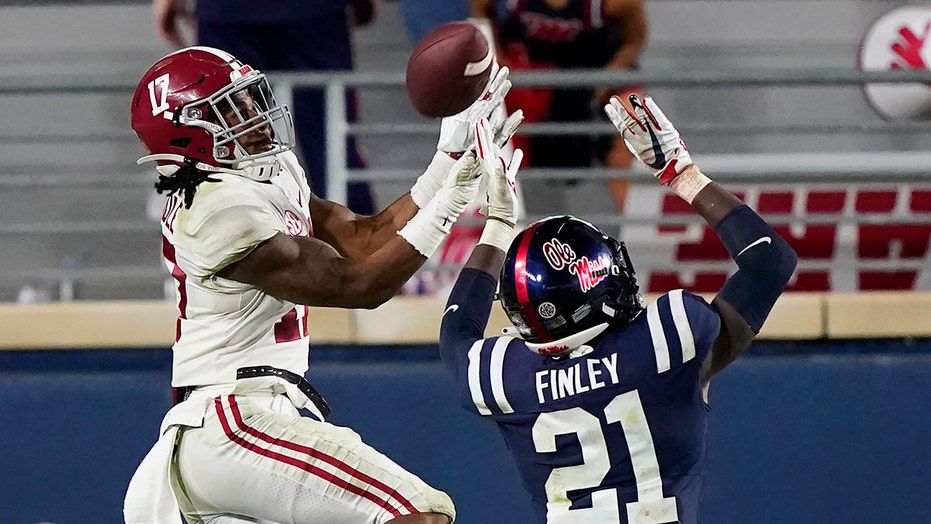 Losing their most dynamic player left Alabama in no mood to celebrate — not even a big win over a longtime rival.

Wide receiver Jaylen Waddle broke his right ankle on the opening kickoff Saturday, about the only thing that didn't go the Crimson Tide's way in a 48-17 victory over Tennessee.

Mac Jones threw for 387 yards and ran for a touchdown, and Najee Harris ran for three more TDs as No. 2 Alabama added the 14th straight win in this rivalry.

The Crimson Tide (5-0) outgained Tennessee 587-302. But playing the Vols proved costly for Alabama a second straight season. A year ago, Tua Tagovailoa hurt an ankle in the second quarter and missed the next game against Arkansas.

On Saturday, Waddle rolled his right ankle as he was tackled on the opening kickoff and was taken by cart to the locker room. Waddle came out after catching the ball deep in the end zone, something coaches usually don't want. But Alabama coach Nick Saban said he trusts the judgment of the talented player.

Saban said Waddle has a similar injury to what Kenyan Drake had with a high ankle sprain with a fracture that probably will need surgery. Waddle will be flown back privately with doctors and taken to Birmingham to see if surgery is needed right away.

“If that’s the case, and we’re pretty certain that it is, he would probably be out for the year,” Saban said.

Tennessee (2-3) forced Alabama to punt on its opening drive. That was as close as the Vols would get in losing their seventh straight in this series in Neyland Stadium. Coach Jeremy Pruitt, now 0-3 against his old boss, said he's obviously disappointed. Saban improved to 23-0 against his former assistants.

“I’m not used to this for sure, and I know the players in our locker room this isn’t what they came here for either," Pruitt said. “These guys are hungry, they want to improve and they will because of that.”

Jones got the Tide moving on the second drive, distributing the ball to different receivers on the first four plays. Harris appeared to fumble on his first carry on the drive but was ruled down before the ball came out, which was upheld on review. Harris scored on the next play.

Harris added TD runs of 2 and 1 yards, and the senior running back finished with 96 yards on 20 carries. He also caught six passes for 61 more yards. Brian Robinson Jr. also had a 7-yard TD run.

Vols coach Jeremy Pruitt went for the 33-yard field goal by Brent Cimaglia on fourth-and-2 early in the second. Tennessee managed one TD drive in the first half with Jarrett Guarantano hitting freshman Jalin Hyatt on a 38-yard TD. Guarantano added a 27-yard TD pass to Josh Palmer to make it 42-17 late in the third.

Saban liked how his defense played.

“This is probably the best we’ve played, even though there’s some plays in there that you could be critical of,” Saban said. “But I was kind of proud of the way the guys played. They played with a little more confidence, and we were pretty aggressive.”

Alabama: Losing Waddle means the loss of a talented punt and kick returner and the player who had been leading the Tide with 557 yards receiving coming into this game. Alabama still has plenty of options as Jones completed passes to six different receivers. John Metchie III finished with seven catches for 151 yards.

Five-star freshman Bryce Young replaced Jones for the fourth quarter and drove the Tide to a field goal.

Tennessee: The best that could be said of the Vols is that they didn’t turn the ball over through the first half after having seven turnovers in the past two games. That ended on the opening drive of the third quarter on Eric Gray’s fumble, which Malachi Moore returned 28 yards for a 35-10 Alabama lead.

Even with Ohio State finally starting its season, Alabama should easily hold onto its spot at No. 2 with this perfunctory win.

“When I took the job, I knew exactly where it was at. Exactly, OK? Which is why I wanted the job, OK? I wanted this job because I wanted to get it to where it’s supposed to be. It's a hell of a challenge all right? And I'm glad I took the job. I’m excited about being here. All right. I'm not discouraged,” said Pruitt, now 15-15.

Tennessee has an open date before visiting Arkansas on Nov. 7.