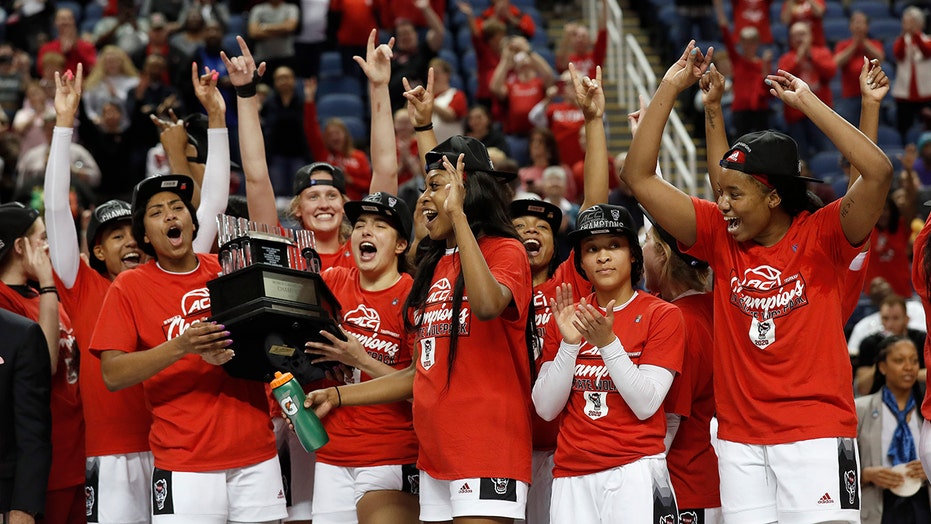 But the significance of the achievement wasn't lost on them Sunday.

They soaked in a historic victory, remaining on the court for more than a half-hour to cut down the nets and make snow angels on the floor amid balloons and confetti after topping No. 22 Florida State 71-66 for their first ACC Tournament title in 29 years.

“It's absolutely amazing to bring back this championship to Reynolds (Coliseum) and our fans and to everyone who has come before us," Konig said.

Konig shook off a rough first half by making 5 of 7 shots from the field in the second half and finishing with 18 points to earn the tournament's most outstanding player.

“I live by the saying that shooters shoot and they don't worry about misses," Konig said. "The coaching staff has a lot of confidence in me and they were lifting me up. Being surrounded by that type of attitude allowed me the confidence to keep shooting."

Elissa Cunane also had 18 points and Jakia Brown-Turner added 14 points and 10 rebounds for the Wolfpack (28-4). They won the school's first tourney title since 1991, taking a tightly contested game in which neither team lead by more than six points throughout.

“Ais is one of the best shooters in this league and she's not going to give up when her shot is not falling,” Cunane said. “We told her they were going to fall in the second half and they did. And look where we are now.”

Kiah Gillespie had 15 points and nine rebounds to lead Florida State (24-8), which had upended No. 4 Louisville on Saturday to reach the finals. Nausia Woolfork and Nicki Ekhomu each had 17 for the Seminoles, who have never won the ACC tourney title.

“It was great for ACC basketball,” said Seminoles coach Sue Semrau of the close contest. “It's great for women's basketball and I love this team. We battled. We fought and came up short."

Konig provided the spark in the second half, helping the Wolfpack overcame a five-point deficit in the third quarter with a pair of 3s.

“We didn't shoot it really well in the first half,” Wolfpack coach Wes Moore said. “But we knocked them down when we needed to.”

The game ultimately came down to a free throw shooting contest.

“For our system, you have to have someone like that inside,” Moore said of Cunane, who grew up just minutes from the Greensboro Coliseum.

With the score tied at 63, Cunane made one of two free throws to put the Wolfpack ahead for good with 1:50 left. After Kayla Jones made of one two foul shots, Brown-Turner got a huge loose ball offensive rebound on the second shot and was fouled. She made both free throws to make it a two-possession game.

Ekhomu's two foul shots cut the Wolfpack's lead to 68-66 with 39 seconds left. Cunane went back to the line with 21 seconds left and again made of one of two.

Down by three, the Seminoles got an open look for Woolfork, but she missed a 3-pointer from the left wing and Cunane grabbed the rebound and was fouled. This time she made both free throws with 13.8 seconds left to help seal the win.

Florida State: The Seminoles came to Greensboro looking to improve their NCAA Tournament seed and likely did just that with two strong showings against top 10 ranked teams. They'll likely be a No. 5 or 6 seed in the tournament. “We got a lot of season left,” Semrau said.

NC State: The Wolfpack made a case for being a No. 2 seed in the NCAA Tournament with a strong finish in the ACC Tournament after a shaky month of February. “We're not done yet,” Konig said of the upcoming tournament.

Both teams will wait to hear from the NCAA Tournament committee on where they will be seeded.

Nets starting to get the very best of Blake Griffin