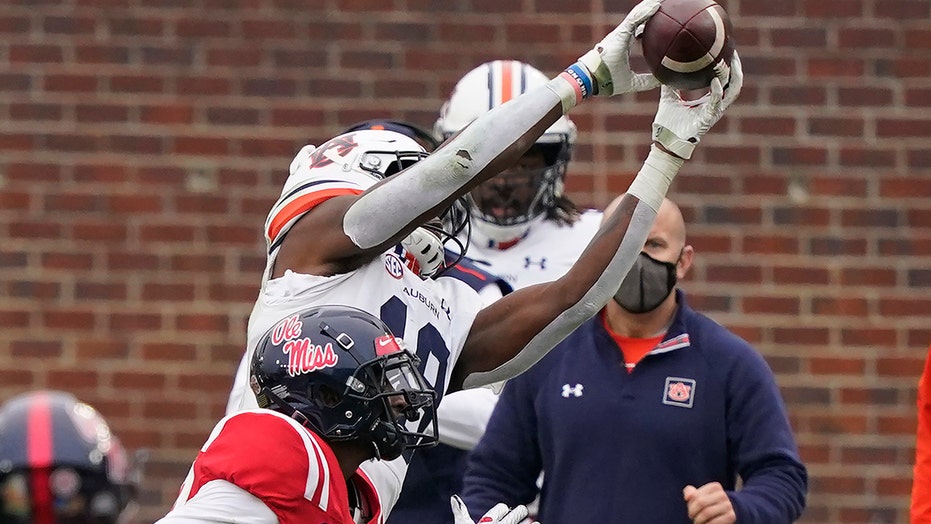 Auburn quarterback Bo Nix directed two fourth-quarter touchdown drives, capped by a 42-yard touchdown pass to Seth Williams with 1:11 left, to lift the Tigers to a 35-28 comeback win over Mississippi on Saturday.

“Bo (Nix) and Seth (Williams) have a special bond,” Auburn coach Gus Malzahn said. “It was down to the end and that’s the way this series has gone.”

Auburn (3-2 Southeastern) rallied from a 28-27 deficit on its final offensive series, covering 80 yards in six plays. Williams, finishing with eight catches for 134 yards, caught Nix’s pass in front of the Auburn sideline, twisted away from two tacklers and turned up the sideline to easily race for the decisive touchdown.

“I looked around to see who was around me, and I saw the end zone and kept running,” Williams said. “That last drive, everybody just came out with the mind-set that we weren’t going to lose.”

Auburn forced an incomplete pass and preserved the win on a game-ending Ole Miss infraction as quarterback Matt Corral advanced past the line of scrimmage before throwing a desperation pass that would have counted as a Jordyn Peters interception without the penalty.

“There’s no pixie dust, you know? You’ve got to make more plays than they do and execute the situation,” Ole Miss coach Lane Kiffin said.. “That’s what winning teams do. It’s a very disappointing loss. Tough to swallow because it was right there.”

“We knew with two minutes and 30 seconds, we could go down and make big things happen,” Nix said. “Seth made a great play. We just never lost hope.”

Corral had touchdown runs of 5 and 10 yards and was 16 of 27 for 154 yards passing, including a 6-yard touchdown pass to Elijah Moore. Jerrion Ealy had a 5-yard touchdown run to give Ole Miss a 28-27 lead with 5:43 left, setting up Auburns game-winning drive.

Auburn: After two failed attempts, the Tigers won a road game. The Tigers won with fourth quarter heroics for the third time this season, this time on the strength of the Nix-Williams combination and a 4 for 4 performance in the red zone. The special teams struggled with a pair of bad snaps in kicking situations and had a kickoff return touchdown by Bigsby wiped out on a holding penalty.

Ole Miss: The Rebels rolled up 444 yards, but finished 4 of 6 in the red zone, including a turnover and an unsuccessful fake field goal attempt. Sam Williams had 11 tackles, including a sack and three tackles for loss, but the defense could not preserve a late lead. The remaining schedule appears to lighten up a bit, as four of the remaining five opponents have losing records.

Nix has had bouts of inconsistency but there were none against Ole Miss. Nix directed touchdown drives of 95, 79, 88, 80 and 80 yards and did not have a turnover after coming off a loss to South Carolina with three

interceptions. “He responded like a champion. He came back. He fought his tail off,” Malzahn said. “You protect the football, especially on the road and you’ve got a real chance of winning and we did that.”

Oklahoma has first win streak after cruising past TCU 33-14