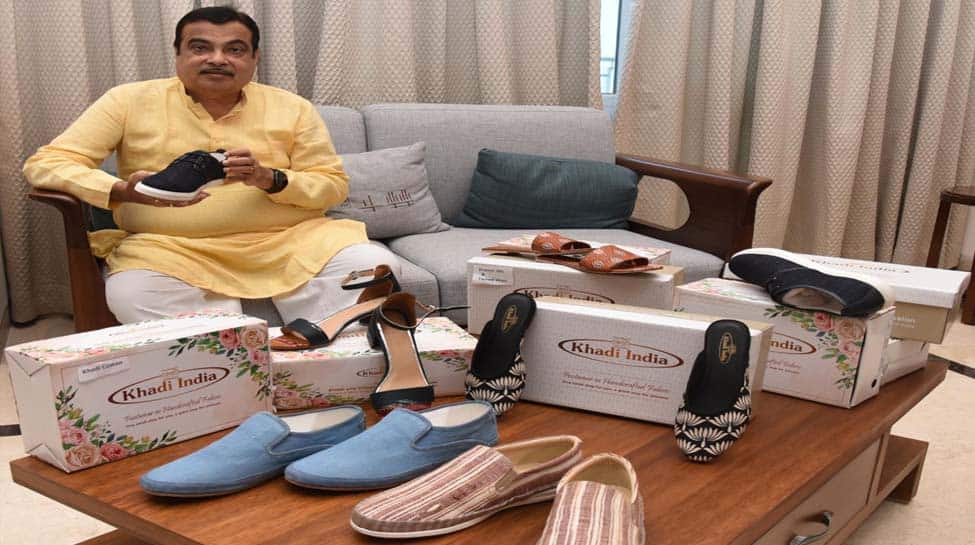 The footwear has reportedly been launched in 15 designs for ladies and 10 designs for men and exquisite Khadi products like Patola Silk of Gujarat, Banarasi Silk, Madhubani-printed Silk of Bihar, Khadi Denim, Tussar Silk, Matka – Katia Silk, a variety of Cotton fabric, Tweed Wool and Khadi Poly Vastra have been used to make the footwear unique and trendy.

Available in a wide range of designs, colors and prints, the footwear has been designed to suit clothing for all purposes – formal, casual and festive occasions. The Khadi footwear price ranges from Rs 1100 to Rs 3300 per pair.

Gadkari had also launched the online sale of Khadi footwear through KVIC’s e-portal www.khadiindia.gov.in on October 21 and had praised Khadi fabric footwear saying such unique products had high potential of capturing the international market.

The launch comes following Prime Minister Narendra Modi's 'Vocal for local' initiative which he also mentioned in his 'Mann Ki Baat' address to the nation on Sunday and said, "When we are going vocal for local, the whole world is also becoming a fan of our local products."

"Many of our local products have the potential of becoming global. One such example is Khadi. Khadi has remained a symbol of simplicity over a long period of time but now our khadi is getting known as an eco-friendly fabric. In terms of health, this is a body-friendly fabric, an all-weather fabric and now it has also become a fashion statement," said PM Modi.

This is to be noted that the overall sale at the Khadi's Delhi's Connaught Place outlet recorded over Rs 1.05 cr on October 24, surpassing Rs 1.02 cr on October 2.

Earlier on Sunday, PM Modi in his 'Mann Ki Baat' address had also talked about a Mexican place and said, "Not only is the popularity of khadi rising it is also being produced in many places of the world. There is a place in Mexico called Oaxaca, there are many villages in this area where the local villagers weave khadi. Today the khadi of this place has gained popularity by the name Oaxaca Khaadi."

He added, "How khadi reached Oaxaca is no less interesting. In fact a young person of Oaxaca, Mark Brown once watched a movie on Mahatma Gandhi. Brown got so inspired by watching this movie on Bapu that he visited Bapu’s ashram in India, understood him and learnt about him in-depth. It was then, that Brown realised that khadi was not just a cloth; it was a complete way of life. Brown was deeply moved by the way khadi was intertwined with the rural economy and self-sufficiency. It was here that Brown resolved to work on khadi on his return to Mexico. He introduced the villagers of Oaxaca in Mexico to khadi and trained them and now Oaxaca khadi has become a brand.

A Teacher, His Killer and the Failure of French Integration

A New Covid Outbreak at the White House

A New Covid Outbreak at the White House