Nigeria housing: ‘I live in a floating slum’ in Lagos

Nigeria housing: 'I live in a floating slum' in Lagos

As a UN report is released condemning the poor state of housing provision in Nigeria, the BBC's Mayeni Jones visits a precarious community in the commercial capital, Lagos.

From above, the Oko-Agbon neighbourhood, in the infamous Makoko floating slum, looks almost picturesque.

Residents move from one to another on canoes, calling out to neighbours and friends. Some outsiders have fancifully described it as the Venice of Africa.

However, get closer and it is a different picture.

The water is full of household rubbish, including needles and human faeces. There is a suffocating smell of rotten fish hanging in the air.

Hundreds of people live here in very close quarters and there is little privacy.

Yet despite these conditions, this has been a refuge for some.

Fisherman Dosu Francis moved here three years ago, after being evicted from Otodo Gbame, another waterfront community about 25km (16 miles) away.

He has been sleeping, with his wife and one of his sons, in a small shed that is used for smoking fish. The shed belongs to one of his brothers and was only meant to be a temporary shelter, but three years on, he has not been able to find anywhere else to live.

'Sent my children away'

"Since we were evicted, it hasn't been easy at all for me to live," says Mr Francis in a soft voice.

"I have three children of school age, but I can't afford their fees and I can't afford to feed them, so I've had to send two of them away to my first daughter who's married.

"Only one of my sons lives here with me." 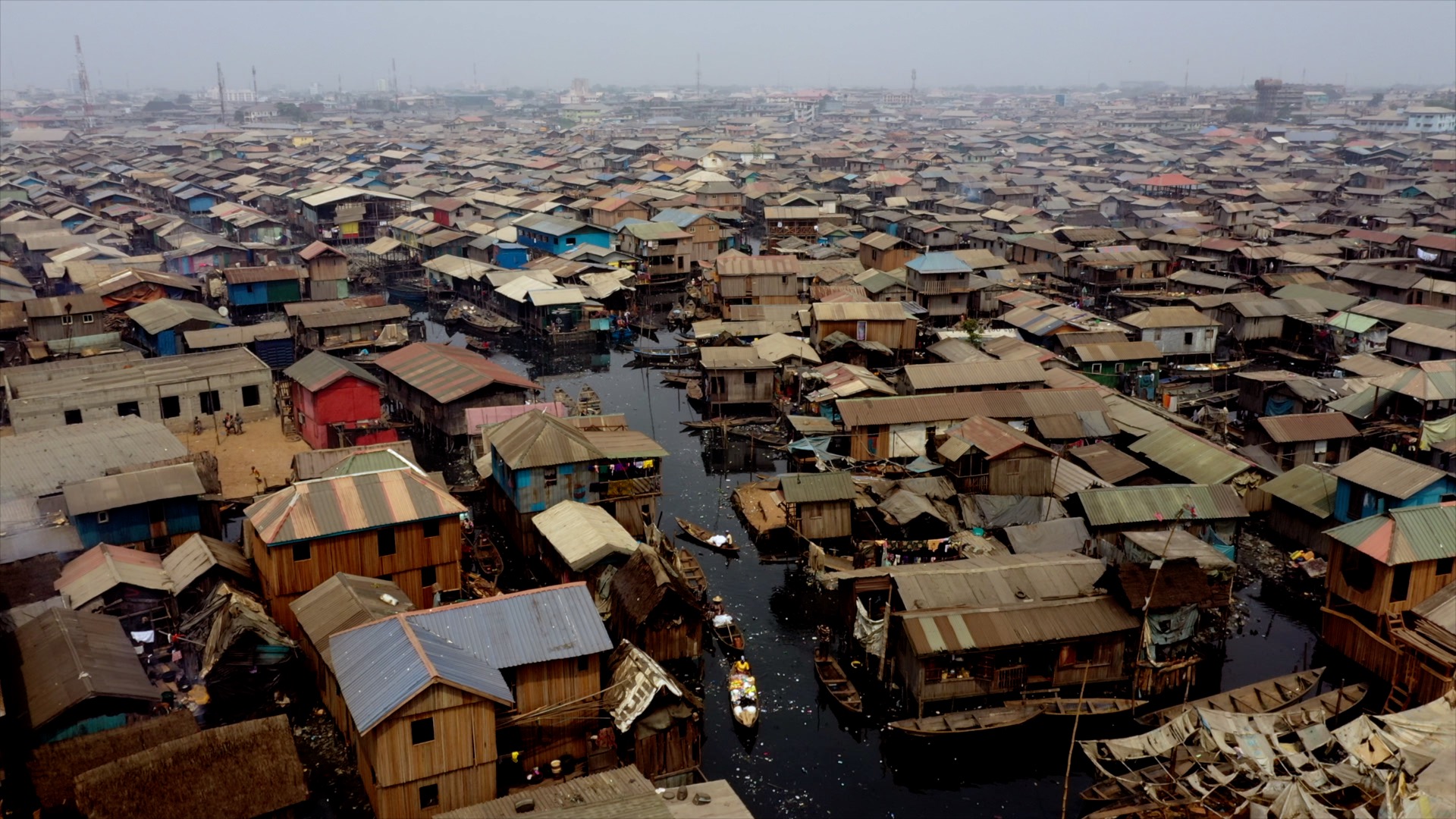 While showing me the shed, a modest structure made of a few planks of wood and plastic sheeting for a roof, he explains that they still smoke fish in it during the day. At night, he clears the uneven ground as much as he can in order to sleep.

I notice holes in the roof and ask what they do during the rainy season.

"We plug up the holes with plastic bags," he replies. 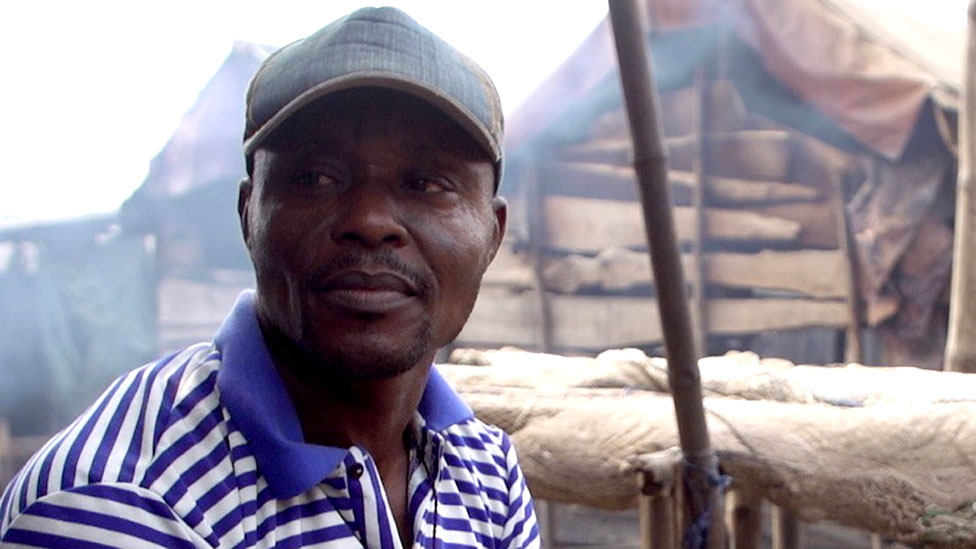 Nothing has been given to us, no-one has given us any money, they just told us to leave"Dosu Francis
Fisherman

Mr Francis says he and other residents of Otodo Gbame were violently evicted in 2017 after a neighbouring community, who wanted their land, sent the police to kick them out.

"They started moving us bit by bit. We thought we might be able to do a deal with the police but they didn't agree, and one day they came and drove everyone out."

I ask if he ever got any compensation since being evicted.

Mr Francis' story is far from unique. Millions have been evicted from the country's slums over the past 20 years, often with very little notice and without being given alternative housing.

According to Amnesty International, between 2000 and 2009, Nigerian authorities forcibly evicted over two million people.

There have been several high-profile forced evictions in Lagos state alone.

In February 2013, state authorities evicted at least 9,000 people from Badia East in central Lagos, to make way for a government building project. In September 2015, another 10,000 people were evicted from the area.

And earlier this year, an estimated 10,000 people were given an hour to pack up their things before being asked to leave the beachfront community of Tarkwa Bay, a popular weekend destination for Lagosians.

Despite some public outrage on social media, many of their houses were soon demolished by the navy.

In late January, I met some of them outside the high court in Ikoyi, where they had come to get an injunction to stop the demolition work.

They said their village was destroyed to make way for a luxury development:

"We believe that it is for the economic benefit of a few pockets," one former resident told me. "Historically, other evicted sites have been turned into private estates and properties."

The authorities deny this, saying they evicted the community there because some of their members were illegally tapping into oil pipelines.

But when I headed to Tarkwa Bay to find out for myself, members of the navy and armed men in military fatigues asked me to leave. They said they had nothing to hide but that we needed to go through the proper channels and come back on a supervised visit.

It is easy to understand why residents might be suspicious.

After Mr Francis' old neighbourhood, Otodo Gbame, was cleared three years ago, luxury apartments started springing up in the area.

But many say these developments are often too expensive for the majority, and tend to remain empty.

"You'll be surprised to know that there are some vacant buildings in Lagos, while you have thousands of people sleeping rough, with no access to adequate housing," says Dr Muyiwa Agunbiade, a lecturer in urban and regional planning at the University of Lagos. 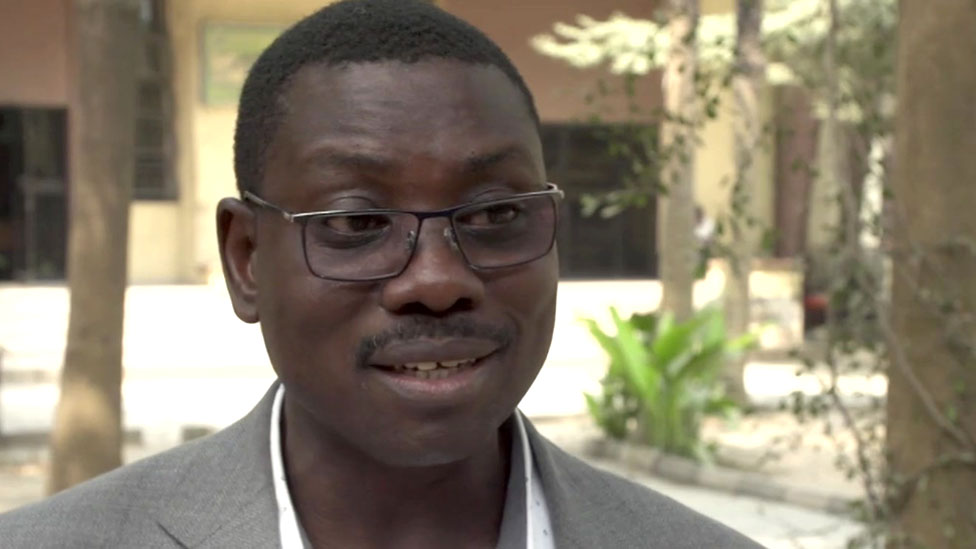 If people have titles to their land, then residents will feel secure enough to build good quality housing"Dr Muyiwa Agunbiade
Urban planning lecturer

"In Nigeria we haven't gotten to the stage [of providing social housing]. Most importantly I don't think the government has the resources to take care of that."

He believes a workable solution would be to formalise the ownership of land. Without that, people who live in informal settlements, can always be moved on, he says.

"But if the government gets it right, and you have a good land registration system, where people have titles to their land, then residents will feel secure enough to build good quality housing and you won't need to evict them."

In the meantime forced evictions continue to happen, leaving many like Mr Francis and his family in limbo.

Stuck in their shed, with the smell of smoked fish everywhere and no guarantee they will not get pushed out again.

Ramayana Recitals On Birthday Of Chinmayanand, Accused Of Sex Crime