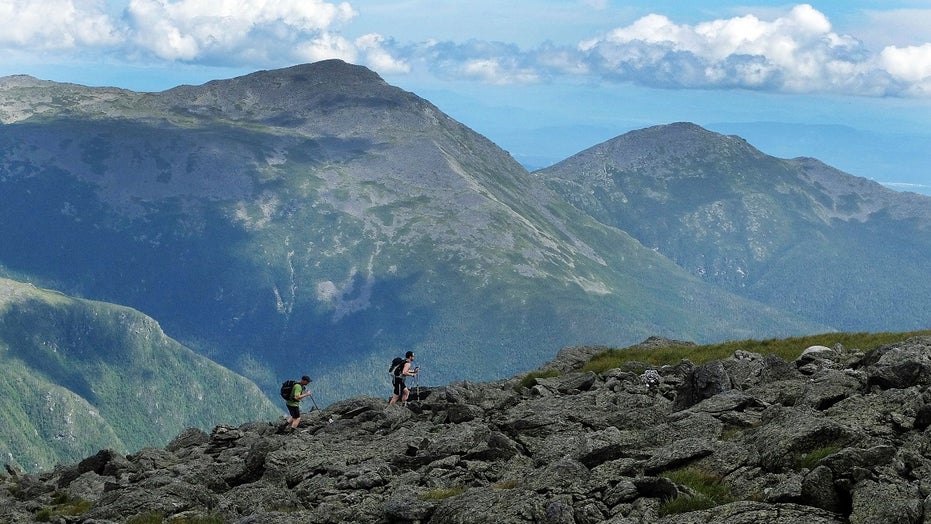 A New Hampshire woman was rescued with the help of a railway train after surviving a 200-foot fall while descending Mount Washington on Sunday afternoon.

Ashley Furness, 35, had been hiking with another companion when she slipped and fell near the Cog Railway tracks on the west side of the mountain. She struck several rocks during the fall, which likely saved her life, according to New Hampshire Fish and Game.

"It was these rocks that ultimately saved her from plunging into the ravine, a fall that would have likely proven fatal," the department said in a press release on Monday. "Her companion was able to descend to her position, place a call for help, and keep her warm with a space blanket until rescuers arrived."

IS IT SAFE TO RUN, HIKE, BIKE OR WALK OUTSIDE IN PUBLIC? 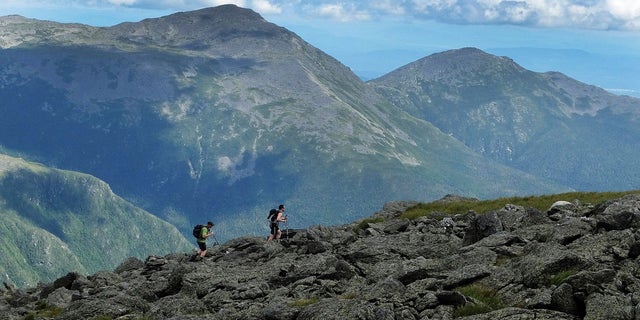 In this July 27, 2016 file photo, a pair of hikers traverse a trail on Mount Washington, N.H. A woman was rescued with the help of a Cog Railway train after surviving a 200-foot fall while descending the mountain on Sunday afternoon. (AP Photo/Jim Cole, File)

The initial 911 call at 4 p.m. relayed how Furness had fallen while descending along the railroad tracks and suffered unknown injuries. Twin Mountain Fire & EMS mobilized its all-terrain vehicle, while Conservation Officers manned snowmobiles to get as close as they could to the victim.

They could only get so far due to the lack of snow and bare spots on the mountain, requiring them to hike the rest of the way up. She was badly hurt and unable to walk. Because of the steep terrain and icy conditions, Fish and Game requested the utilization of the Cog Railway and personnel agreed to get a train ready for her rescue.

"The temperature was in the teens and the wind was starting to blow which made it feel even colder," said Fish and Game Region One Lieutenant Mark Ober.

Due to her injuries and lack of mobility, a rescue belay was set up in the meantime with "ropes, a litter, and other essential gear" that was utilized to get her from the side of the ravine up to the tracks.

Rescuers were able to hoist her up to a location next to the tracks until a train arrived around 10:15 p.m.

Furness was placed on the train that arrived at a base station located two miles down the mountain around 11:00 p.m. An ambulance then transported her to Littleton Regional Hospital for treatment.

"I can’t thank Wayne Presby and his Cog Railway staff enough for assisting in this life-saving rescue,” Ober added. “Without the use of the train, we were looking at a potentially all-night rescue scenario which would have included calling in several dozen additional rescuers and technical rope teams just to get the injured hiker down the mountain safely."

How 1,00,000 Cameras Are Playing Critical Role Containing Virus In Moscow

US tech giants team up to tackle coronavirus

US tech giants team up to tackle coronavirus