Netanyahu, Gantz face off in Israel’s unprecedented third general election in a year amid coronavirus fears

Netanyahu, Gantz face off in Israel’s unprecedented third general election in a year amid coronavirus fearscloseVideo

Israelis voted in an unprecedented third general election in less than a year Monday to decide whether the power to lead the nation will stay with incumbent Prime Minister Benjamin Netanyahu despite his upcoming trial on corruption charges, or go to his challenger, retired military chief Benny Gantz.

Neither Netanyahu, of the nationalist Likud party, nor Gantz, of the centrist Blue and White party, were able to form a majority coalition during the previous two elections, leaving Israel in a state of political paralysis, and opinion polls are forecasting another deadlock.

As fears over the coronavirus deepen, possibly hindering voter participation, those who went to the polls spoke to Fox News in Tel Aviv after casting their ballots. Many believed it was time to get a working government, no matter who was elected.

“We should finally have a government,” said Shaina Kaplan, who’s from Jerusalem. “This is the third time. Without a government, the country can’t work right.” 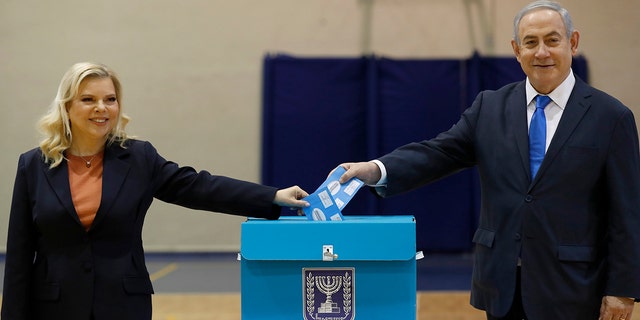 Netanyahu and his wife Sara cast their ballots during the Israeli legislative elections at a polling station in Jerusalem on Monday. (Atef Safadi/Pool Photo via AP)

Kaplan said she thinks Netanyahu “is the greatest prime minister” and doesn’t think anyone else on the ballot can do a better job than he. However, her biggest desire is to get the government working amid continued security threats against the country.

Allan Niewodowski, a critic of Netanyahu, said the prime minister has “manipulated the security situation” in Israel, and called for “new” and “honest” leadership.

“Bibi said a long time ago he was going to destroy Hamas, well he’s had 10 years to do that and he’s done nothing in those 10 years,” Niewodowski said. He also said Israel needs to enter into diplomacy with other nations for the good of both Israel and the Middle East. 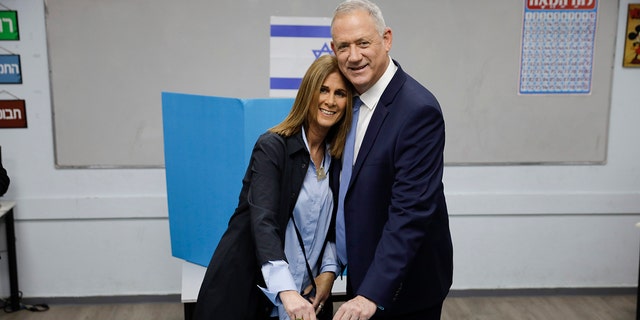 Gantz and his wife Revital vote in Rosh Haayin, Israel, on Monday in the country's third general election in less than a year. (AP Photo/Sebastian Scheiner)

However, Niewodowski said that Gantz’s campaign approach may not have been “aggressive enough” in reaching Netanyahu’s “demagogic” level by focusing too much on social issues.

“In trying to deflect the issues to more social, health, issues of that sort, I don’t think [Gantz] has succeeded in capturing the excitement of the people on the street,” he said.

TRUMP'S MIDDLE EAST PLAN — WHAT'S THERE TO BE ANGRY ABOUT?

Netanyahu has acted as a caretaker prime minister for more than a year through the two inconclusive votes.

Looking to serve his fourth consecutive term in office, and fifth overall, Netanyahu is desperate to score a narrow 61-seat majority in parliament with his hardline religious and nationalist allies before going on trial March 17.

Netanyahu has tried to portray himself as a statesman who is uniquely qualified to lead the country through challenging times. Gantz has tried to paint him as divisive and scandal-plagued, offering himself as a calming influence and an honest alternative.

Fox News' Trey Yingst and Dana Karni, and The Associated Press contributed to this report.