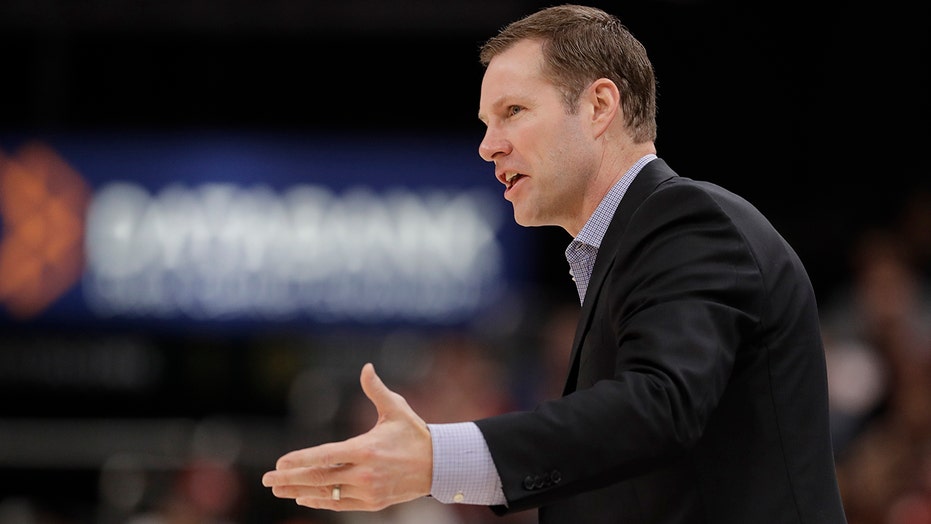 Nebraska coach Fred Hoiberg was taken to a hospital for evaluation after he left Wednesday night's 89-64 loss to Indiana in the Big Ten Tournament due to a cold.

Hoiberg was in visible discomfort on the Cornhuskers' bench. Doc Sadler took over after Hoiberg left the floor in the second half.

Nebraska did not make any players or coaches available to the media after the loss. The school announced Hoiberg was checked by medical personnel before the game, and then became ill later. He was taken a hospital, where he was diagnosed with a common cold and then released, according to the school.

The Big Ten is closing the rest of the tournament to fans over fears of exposure to the coronavirus.

The 11th-seeded Hoosiers (20-12) will play sixth-seeded Penn State (21-10) in the second round Thursday night. Indiana split its two meetings with the Nittany Lions.

“I would say it would be a heck of an environment in here, but it's going to be more like a closed scrimmage, which is unfortunate," Indiana coach Archie Miller said. “We'll be ready to go. Penn State has had a heck of a season and heck of a team so we got a heck of a challenge.”

Miller chose to send his players back to the hotel instead of to interview room after hearing the news about the NBA suspending its season over concerns about the spread of coronavirus.

“I think, once you start getting the news that we got after the game, I think right now for our players, it's let's get cleaned up, let's get out of here, and let's get back to the hotel where we can keep our group kind of tight and move forward with tomorrow,” he said. “They're not going to have a whole lot of answers about what's going on anyway.”

Indiana got pushed a bit by Nebraska, but the Hoosiers' depth was too much for the Cornhuskers.

“They made their runs during the (second) half, got us a little bit stationary at times, but I thought overall our guys responded and were able to finish the game in a big way,” Miller said. “And I'm proud of our depth. I thought we had a lot of guys. We were committed to playing a lot of guys tonight, and we had a lot of guys play valuable minutes and get some things done.”

“Early on, I didn't think we were ready, and then as the half sort of closed, we had a big run, which was a real key part of the game,” Miller said. “Being able to go into halftime with a lead was important, and then we started the second half, I thought, really well as well to build a cushion.”

Nebraska struggled in Hoiberg’s first year as coach. The former Iowa State and Chicago Bulls coach is trying to instill discipline in the program.

Indiana strengthened its case for NCAA Tournament bid by winning its 20th game. The Hoosiers seldom have success in the Big Ten Tournament, only reaching the championship game once, losing to Iowa in 2001.

Miller was especially impressed with Franklin's play after the freshman's playing time had been more limited of late.

“Here the last three or four weeks, his role really hasn't diminished in our eyes, but his minutes have gone down,” he said. “He stays with it. He's a great kid. He's an unbelievable teammate."

Nebraska had seven scholarship players entering the game, so they added football players Noah Vedral, a quarterback, and Brant Banks, a 6-foot-7 offensive tackle, to the roster.

Nebraska ends its season with a 7-25 record