The NBA on Thursday announced the hiring of Oris Stuart as the league's "chief people and inclusion officer," a newly created administrative.

Stuart will be responsible for leading the 30-team league's combined Human Resources and Diversity and Inclusion groups, an NBA statement said. He will also "oversee diversity and inclusion strategies for the NBA" while helping to "attract, retain, develop and engage diverse talent."

“Oris’ appointment as Chief People and Inclusion Officer is a testament to his impact on our leagues and teams over the past five years,” NBA Commissioner Adam Silver said. “His commitment to developing our employees and driving inclusion at every level of our organization make him uniquely suited for this new role.”

TO NBA COACHES, RACIAL EQUALITY IS A PRIORITY OF THE RESTART

Stuart will start the role Aug. 15 and report to NBA president of administration Bob Criqui.

Before joining the NBA in June 2015, Stuart was a senior partner with Korn Ferry — an executive search and talent management firm — where he led its Inclusion and Diversity practice for two years. He's is one of the 31 African-American league office employees who hold a position of vice president or higher. He previously served as the NBA's chief diversity and inclusion officer.

The NBA recently released its 2020 Racial and Gender Report Card, which saw the league receive an A-plus for racial hiring overall. The NBA was given an F grade when it came to racial hiring and hiring women for team presidents and CEOs.

The report stated that 83.1 percent of the NBA’s players were people of color as of Nov. 1, 2019. The league consists of 74.2 percent Black players, 16.9 percent white players, 2.2 percent Latino or Hispanic players, and .4 percent Asian players. Those classifying themselves as "other" races made up 6.3 percent of all players.

Out of 30 teams in the NBA, there are three Black CEOs or presidents, according to the report. People of color represent 30 percent of all NBA head coaches

"With a focus on people, culture, inclusion and innovation, Stuart will establish policies and expand programs to increase the representation of people of color and women in leadership roles and positions across the league," the league said. 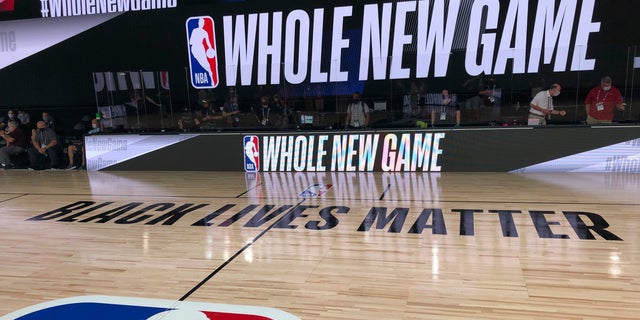 A basketball court is shown at the ESPN Wide World of Sports complex in Florida on Tuesday, July 21, 2020. (Associated Press)

In June, the NBA and the players union agreed that shedding light on social justice issues would be a shared goal of the 22-team season restart in Orlando, Fla.

“The league and the players are uniquely positioned to have a direct impact on combating systemic racism in our country, and we are committed to collective action to build a more equal and just society,” Silver said. “A shared goal of our season restart will be to use our platform in Orlando to bring attention to these important issues of social justice.