More than 120 victims who claim they were sexually abused by former USA gymnastics team doctor Larry Nassar demanded on Wednesday that the Justice Department release the inspector general’s report detailing the FBI’s handling of the investigation in an effort to boost transparency.

In a letter written to the Department of Justice's (DOJ) Inspector General Michael Horowitz on the five-year anniversary that the FBI became aware of allegations of Nassar's abuse, victims wrote that the report "is important for our healing for all the facts to come out and for wrongdoers to be held accountable."

"It is also important to maintain public confidence in our federal law enforcement agencies by exposing the truth and initiate reforms so that this never happens again,” the letter said, according to reports by NBC News.

The convicted doctor was working at Michigan State University and USA Gymnastics, which trains Olympians, when he sexually abused the athletes. 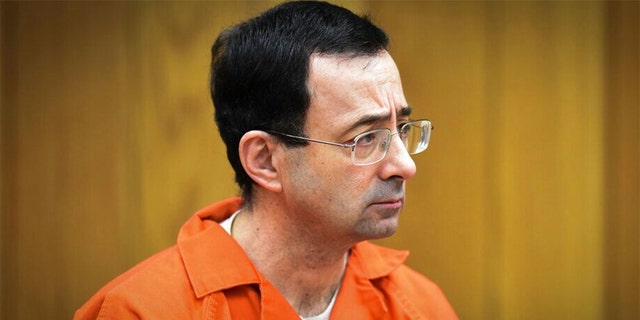 Disgraced USA Gymnastics doctor Larry Nassar was sentenced to up to 175 years in prison after he pleaded guilty in January 2018 to sexually abusing 10 underage girls.

Nassar's accusers, which included U.S. Olympic gymnasts Mckayla Maroney, Aly Raisman, Gabby Douglas and Simone Biles, said he would use his ungloved hands to touch them inappropriately while they were on a table seeking help for various injuries.

The 54-year-old is serving a sentence of up to 175 years after he pleaded guilty in January 2018 to sexually abusing 10 underage girls.

“Why is the Justice Department sitting on this report? We do not want it withheld and then have authorities claim they cannot indict and prosecute people involved in criminal conduct because the statute of limitations has expired,” the letter said.

Nassar was reported to the FBI by USA Gymnastics in June 2015 and was arrested in December 2016. In that year and a half span, he is suspected of abusing some 40 girls.

The length of time it took Nassar to be arrested has been a point of pain for his survivors. One of his victims, Raisman, was not contacted by the FBI until 15 months after she filed her complaint against Nassar.

A congressional report on the investigation concluded last year that the FBI's lengthy investigation "dragged on" and as a result "did not stop Nassar from seeing patients or protect those in harm's way."

Earlier in June, Sen. John Cornyn, R-Texas, urged the IG to release their report but to no avail.

The report on the FBI's Nassar inquiry was referred to the DOJ's Public Integrity Section –­ a branch of the department that deals with allegations of criminal misconduct by elected and appointed public officials –­ in 2018. A spokesperson for the IG's office, however, told NBC that it will be made public when the investigation is complete.

"The Department of Justice Office of the Inspector General is investigating the allegations concerning the FBI's handling of the Nassar investigation, and the victims and the public should rest assured our findings will be made public at the end of our investigation," Stephanie Logan, a spokesperson for the inspector general's office, said. Logan declined to comment on specific questions about a criminal referral to the Public Integrity Section.