Militants in Gaza use party balloons to deliver bombs: reportclose

Militant groups in Gaza have been releasing balloons on a daily basis—about one third carrying explosives—into cities like Netivot, prompting military responses, a report Sunday said.

The Washington Post, citing local police, reported that the balloons have been released over the past few months, but usually land in the countryside. But the report said the sightings send these neighborhoods fleeing for cover, and the report cited a police commander who expressed fear that there will eventually be deaths. 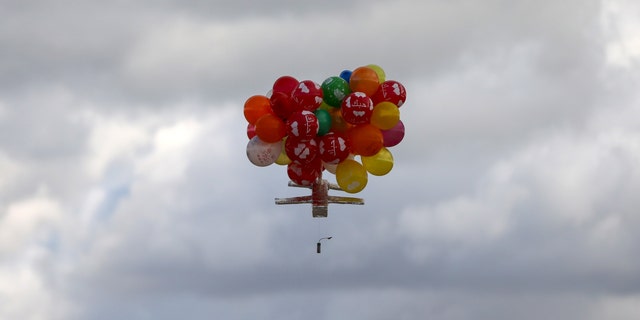 Chai Fahima, a police officer who deals with bomb-disposals, told the paper that the intention of these balloons is to terrify residents. Some have been found 50 miles away.

The Gaza Strip is a 140-square-mile piece of land occupied by Palestinians bordering the Mediterranean Sea between Egypt and Israel. The area has been a focal point of the Israeli-Palestinian conflict and has been on the global radar for decades.

President Trump and his administration have made brokering the peace process between the two sides a top priority, but have yet to find common ground that both sides are willing to agree to.

Trump's decision to relocate the U.S. embassy to Jerusalem was welcomed by Jews but denounced by Palestinian leaders and other Middle East countries.

The Post interviewed an unidentified Gaza man, 30, who is part of a small cell that sends these balloons. He said the balloons are not intended to kill children.

"Our aim is to break this siege," he said.

Whales So Close You Can Touch Them: A Family Adventure in Canada