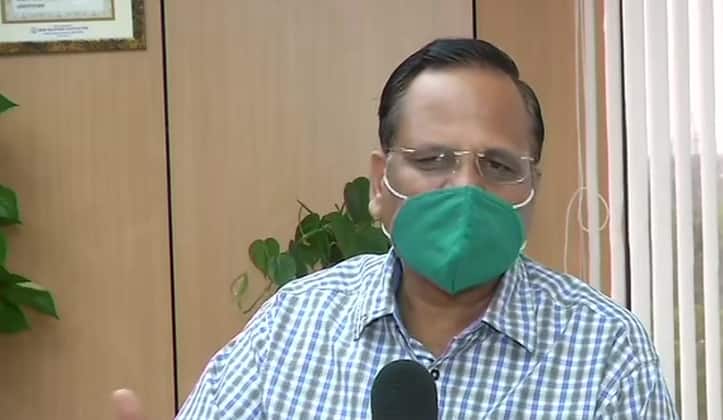 Delhi Health Minister Satyendar Jain held a meeting with the three Mayors of the MCDs to find out a solution to the issue of non-payment of salaries of the medical staff of the North-MCD run hospitals, following the direction from Chief Minister Arvind Kejriwal.

The three Mayors, however, refused to show up for the meeting with Satyendar Jain, thereby, denying any chances of discussion or conciliation on the matter.

Today, Mayors of all three BJP-run MCDs protested outside the residence of CM Arvind Kejriwal, over the non-payment of salaries to the employees of their own hospitals, Hindu Rao and Kasturba Gandhi. The Nurses and doctors have been protesting since October 5 and have not been paid for the last four months.

Addressing the issue of the ongoing protest, Minister of Health and Family Welfare, Satyendar Jain said, “I received a call from the CM and immediately made it known to the Mayors that I will be expecting them at 2 pm, but hours have passed since then, and they haven’t shown up."

"The doctors and nurses at both Hindu Rao and Kasturba Gandhi have been protesting since long. Had the Mayors wanted a discussion, they would have come and we could have landed up at an effective solution to solve this impending issue. But they wanted to politicise the matter," he said.

Responding to the query surrounding allegations put by BJP led MCD on Delhi Government not releasing payments, which has led to the void in their finances, Jain said, “The expenditure done by MCD is known to all. A small example of it would be the hoardings they put in and around Delhi. These hoardings don’t come for free. This proves that there is no dearth of funds."

He further said, "Putting baseless allegations on the Delhi government for lack of funds is not justified when their management system is filled up to the brimmed with corruption. Take House tax for example. If they have to collect Rs2500 crore, they will show a collection of Rs 1000 crore on paper and divide the remaining Rs 1500 crore amongst themselves."

"Malfunctioning in their own management system is not reason enough for them to accuse Delhi government of not providing funds. They need to do a better job at optimum utilisation of the budget," Jain added.

The issue has been increasingly haunting the heroes of the front lines protesting for a long to get their dues for providing services when the virus brought the entire nation to a standstill.

Delhi's Health Minister said, “We have given an open invitation to hand over the MCD to us. We will both, effectively and efficiently run it. We also promise that we will pay the salaries of our heroes on time. Either you function properly or you resign from the responsibility. We will do whatever is required of us, financially to make sure the doctors and nurses receive their dues at the earliest.”

In case the Mayors will go to the Central Government to request funding, Jain said, that they have the full support of the Delhi government in doing so. The ultimate aim is to pay the salaries due to the Corona warriors.

‘Fat and happy’ with a conservative court, are Republicans losing a winning issue?